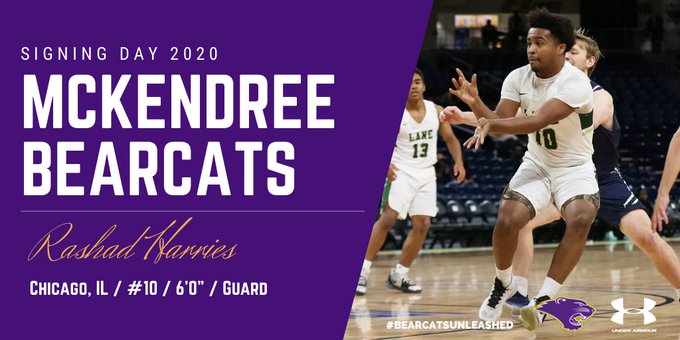 “I remember Rashad standing out immediately as I knew him from his older brother, who was a student of mine.”

Fast forward, and now Harries, Div. 070, is a senior who will be playing basketball at McKendree University next year.

Harries will be following the footsteps of his father, Ranardo Harries, who also played at McKendree University.

For Harries, it took a realization that he was not cut out to play football, for him to pursue basketball.

“As a kid I used to play a lot of flag football, but I knew I wasn’t going to be ready for the field, like the actual pads,” Harries said. “So, I just kind of got into basketball about around my middle school years and then I just kept going with it.“

Harries may have played football when he was younger, but he is fully set on the basketball court now.

“My first experience [playing basketball] was probably just playing outside. It wasn’t anything organized, just practicing a little bit then,” Harries said. “I kinda saw my friends playing organized so then I decided, you know, might as well try something out.”

Harries first started playing basketball while a student at Ogden International, before attending Lane, just like his brother Ramon, who graduated from Lane in 2016.

“My brother attended the school before I did and ever since then I really didn’t have another [high school] choice for me. I just really wanted to follow his footsteps and just go to Lane Tech,” Harries said.

From freshman year on, Harries immersed himself as a part of the Lane Boys Basketball program.

Harries said he would often stay after practice, just to improve his skills.

“A lot of coaches like Coach Harlow, he would stay with me after practice for about thirty minutes, just helping me get my shot right, fix my form, and give me advice on how it will translate in order to game shots,” Harries said.

But for Harries’ father, one of his favorite memories of Rashad playing at Lane was during his freshman year.

“His freshman year, he had a game-winning shot . . . and they ended up winning the whole tournament,” Ranardo Harries said.

By sophomore year, Harries was on the junior varsity team, but also had some time on the varsity team. Harries then moved up and earned a spot on varsity both his junior and senior year.

“Rashad was always a natural athlete, but his growth as a basketball player has been tremendous,” LoGalbo said.

LoGalbo said Harries has grown not only as a player, but as a leader on the court as well, leading Harries to be selected as one of the captains for the team his senior year.

“Rashad has always been an exceptional leader. I think the biggest area of development as a leader for him during his senior year was his communication,” LoGalbo said. “He was very vocal with his teammates about what needed to be done but I also trusted Rashad and he and I were always in communication as well.”

Even though he was captain at Lane, Harries knew that he did not want his senior year to be his last year playing competitive basketball.

“[Playing in college] was the goal all along. I knew that me being a senior meant that it was my last year of course, but [I] wanted to help the team,” Harries said. I knew that I had to be good enough in order to play at the next level, so I just really focused on, not only getting myself right, but getting the ability to lead the team so I could play at the next level.”

But it was no simple task to make it to the next level. As skillful as he was on the court, part of the task came with just trying to get noticed.

“It was really just sending a lot of film out to colleges, trying to get my name out there. It was hard because coming into my senior year I didn’t really have the hype of a lot of other players, even in CPS league, so I had to prove myself,” Harries said.

All of this paid off, with Harries receiving offers to multiple schools.

As for Harries, the moment he found out his dad went to McKendree was when he decided that was the school he wanted to attend.

“I think it was about a month ago. Me and my dad are talking and he told me that he had attended there. I didn’t know that he attended that college. So it was honestly a crazy [situation]. I was like ‘Dad, are you serious, like are you really serious’…Then as the coaches started to hit my phone up, and we started to talk, and I really liked the coaches as well, the facilities and the program, I just knew that I had to be a part of that,” Harries said.

For Ranardo Harries, college basketball is nice, but he is most excited that Rashad  is just going to be going to college.

“Just the fact that he’s in college [is exciting]. It’s not so much basketball with me now, basketball is a vehicle to get to other things in life,” Ranardo Harries said. “Rashad understands that, he understands that you know anything can happen on the basketball court, I mean he can hurt himself and not be able to play anymore, but you know education is first.”

Balancing academics and athletics is nothing new for Harries, following four years of schooling at Lane Tech.

“A lot of teachers are pretty considerate, not saying they give any of their athletes  leeway or things like that, but they’re understanding,” Harries said. “And it’s hard. It’s difficult. It’s a difficult task. You know you got practice, but you also have a lot of assignments due from those seven classes you have every day, so it’s all about time management. You know you got to plan your things out and you just got to prioritize things, that’s all it is.”

But even after four years of hard work in the classroom and on the court, Harries was not able to get the ending of high school he, or any of his senior classes, wanted.

“It was honestly sad, because knowing that the friends that I made over these four years, I can’t give a genuine goodbye to. It’s a sad feeling. Like it’s one point being a student, you’re like, yeah no school, but as a senior, and your last four years of high school, knowing that you probably won’t ever go back to see those kids, it’s a hard experience,” Harries said. “It hurt me at first, but after a while I had to get over it.”

As Harries gets ready for college, he also is starting to think big picture.

“I would actually love to go overseas to play basketball. Going professional was always my goal. NBA or overseas. I know that going overseas would possibly be more of a quicker goal I can meet, and then from overseas to the NBA is even more possibility.”

No matter where Harries plays over the next few years, he is going to be missed in Chicago, both on the court and with his family at home.

“Like every season, I will miss all of our graduating seniors,” LoGalbo said. “With Rashad specifically, I will miss his vocal communication and the way he represented our program the Lane Way on and off the court.”

Despite the nearly 300 miles separating Lane Tech and McKendree in Lebanon, Illinois, Harries will have lots of support from the Lane Tech basketball family in Chicago.

And he may have some fans at a couple of home games during the season.

“Oh most definitely [I’ll make the trip to some games]. Yes. That’s a no-brainer. Yes. I still have college buddies that live down in the town, yes I’ll make a lot of trips,” Ranardo Harries said. “A lot.”

No matter who is the crowd, Harries is now ready to make an impact with the McKendree basketball program.

“A lot of [McKendree’s] interests were to develop their players. Not only as people, but as a actual player. They want their players to be able to do whatever they please, even if that’s going professional — if that’s your goal then they’re going to get you right for that,” Harries said. “And their track record is really what stood out to me. [Commiting there] was honestly a great experience.”