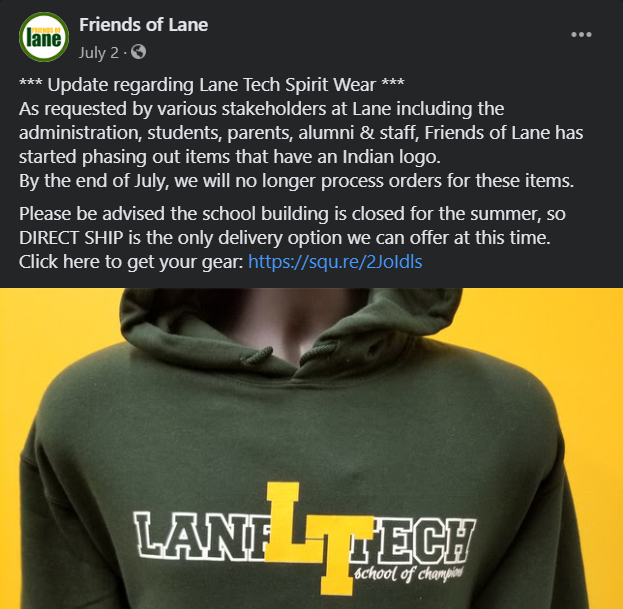 The Lane Tech Indians are no more after the Lane Tech administration has officially decided to remove the name, according to an email sent yesterday to the Lane community from Principal Brian Tennison and CPS Network 14 Chief of Schools Laura LeMone, EdD.

“Taking into consideration the feedback from the four week process considering the removal of the symbol, the LCS vote and support from the CPS Office of Equity and Network 14, the Lane administration has decided to officially remove the symbol of a Native American as the Lane Tech mascot,” the email read.

This decision comes following a unanimous vote by the Local School Council (LSC) to remove the symbol.

Despite the unanimous vote from the LSC, nothing was final since the vote was non-binding. Lane LSC chairperson Emily Haite said during the meeting that the LSC was told an administrative vote was needed to make the final decision.

It did not take long for the administrative vote to occur: the email was sent two days after the meeting.

The email also contains part of a letter that was sent from the CPS Office of Equity to the Lane Tech LSC, voicing its support for the removal of the symbol.

“We acknowledge that for some Lane Tech constituents, the symbol/mascot represents a deep connection to their historical school experiences, which the Office of Equity took into account; however, those memories can not take precedence over repairing historical harm upon Indigenous people and their heritage,” the Office said, according to the email.

The Office of Equity also said in the letter that they spoke with the American Indian Center who said “the Lane Tech symbol and mascot is racist and upholds our genocidal past as a nation.”

Now that the decision is official, the LSC will work with the Lane community to find a new symbol for the school.

“In the upcoming school year, our LSC will work with students, faculty, staff, the Lane administration, Network 14 and the CPS Office of Equity to identify a new symbol that reflects the values of our school community,” the email read. “We will communicate more details about this process after the start of the new school year.”