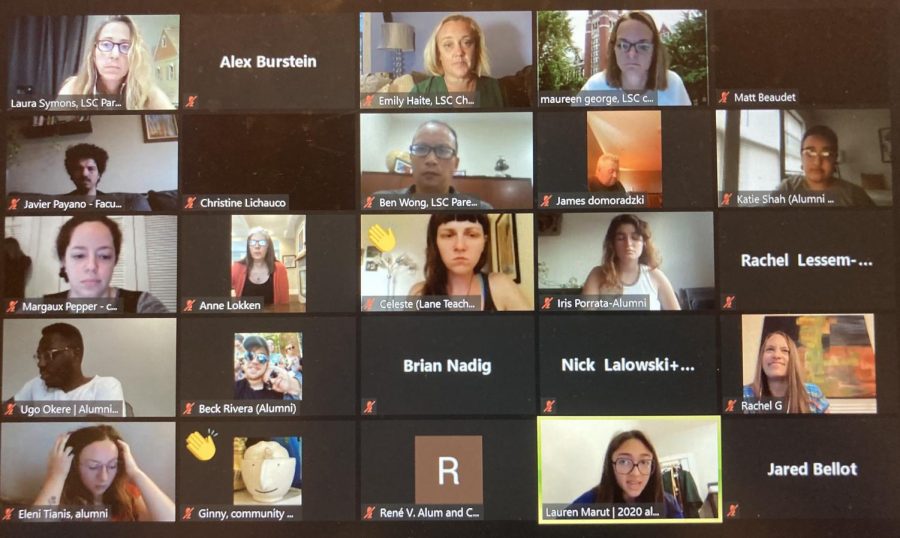 The Lane Tech LSC meeting virtually to vote on whether to keep SROs in the building (Screenshot from Lane Tech LSC Zoom meeting Aug. 10)

By Alex Burstein and Emily Delgado

The Lane Tech Local School Council (LSC) has officially voted 9-3 to remove police officers, known as school resource officers (SRO), from the school at a special meeting held via Zoom, earlier this evening.

This vote occurred over a month after the CPS Board of Education (BOE) voted 4-3 on June 24 to keep a contract between CPS and CPD to have police police officers in school. Following the BOE vote, CPS announced that schools that have permanent officers would have to have an LSC vote by Aug. 15.

At the beginning of the meeting, Chairperson Emily Haite stated that the removal of the SROs doesn’t mean removing the security staff at Lane. Haite also stated that SROs will not be paid while students are in online school.

Although the call to remove or retain the SROs was split, every public participant had the students’ safety in mind.

The Lane LSC also put out a questionnaire regarding the SROs in the school, the results of which were announced during the meeting.

Out of the 1,327 responses, 62.2% wanted to retain the officers, a stark contrast with the views voiced in public participation.

The meeting wrapped up with the grand finale — the discussion and vote. Haite made a motion to keep the officers, and the roll-call vote followed, meaning each member would state their case and then vote.

Earlier this morning, CPS released its new proposed budget, which calls for spending on SROs to be cut from $33 million to $15 million, according to the Chicago Sun-Times. This cut will save CPS $18 million. The Board of Education will vote on the proposal at their August meeting later this month.

Having declined to have the SROs present in the building, Lane will not receive any of the money that was being spent on the SROs.

LSC members discussed the presence of SROs in Lane at the June 15 LSC meeting, prior to the June Board of Education meeting.

According to the minutes of the June LSC meeting, “Multiple communications were received by the LSC questioning the placement of an SRO in the building. Mr. Tennison reported the officer is not involved in student discipline, but is intended to be a deterrent and protector in the case of an active shooter situation.”

At the end of tonight’s LSC meeting, Haite provided a look forward now that the SROs are officially removed.

“One good thing about the students not being in the building in a few weeks is it’s going to give us some more time to make a plan,” Haite said at the end of the meeting. “We all want to keep our students safe and we will come up with a plan to do so.”