Student athletes prepare for unprecedented fall season during the pandemic 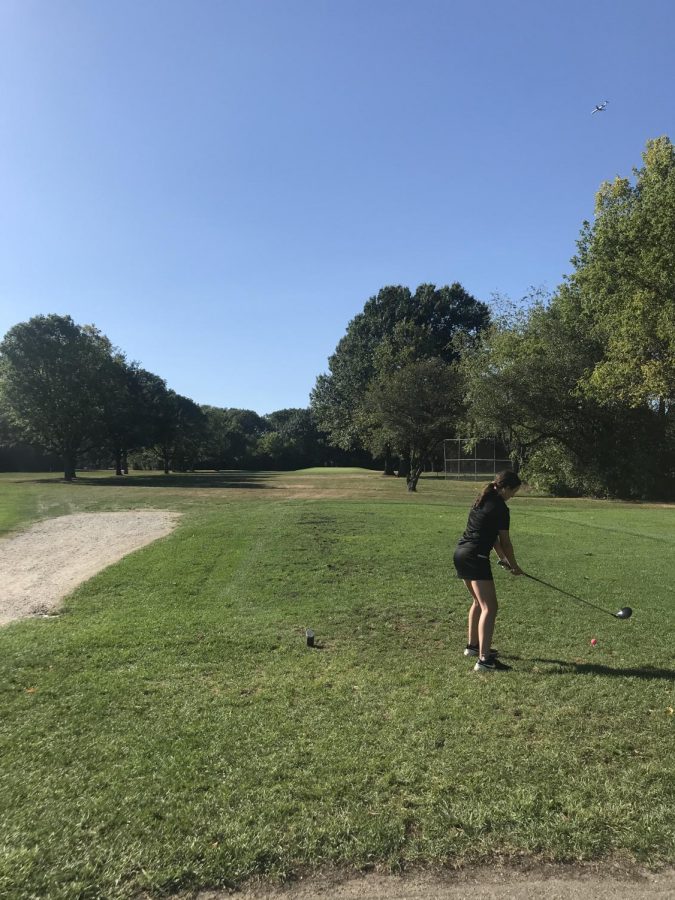 As thousands of students across the city set up laptops and rush to virtually submit summer homework, the Lane boys golf team is teeing up and practicing putts on the golf course and at the golf range under the late summer sun.

“I have thought about that concept of being allowed to play golf (or any sport) and yet not being able to be in school,” boys golf coach Robert Hirsch said in an email interview. “It is so valuable, though, to be able to provide a safe activity for the athletes, as well as to be able to give them the ability to interact socially without a screen.”

Along with boys golf, the girls golf team, girls swimming and diving, girls tennis and cross country all have kicked off their seasons at Lane with tryouts and practices after the IHSA decided to allow certain low or no-contact fall sports to play earlier this summer. CPS later announced that kids could still play, despite the district going fully-remote for learning.

For the season to happen, there have been changes in everything from practices to state finals. Practices before and after remote learning hours for swimming, mask and temperature check requirements, and going to school after and possibly before remote learning for practice have been put in place. Teams will also only be playing nearby schools, mostly CPS schools with a few exceptions, and full-on state championships likely won’t happen. All of this is being done in hopes of a safe transition to sports.

These safety precautions begin with practice, and new protocols have been put in place for the sports.

“Before each practice we have to do this sort of sign in thing where he asks us questions, like if we have any symptoms, where we’ve been, and then takes our temperature,” said golfer Ian Forbes, Div. 150.

“Since golf is naturally a rather spaced out sport, the transition this fall with using the new precautions has been relatively manageable. Typical practices are composed of hitting balls on the driving range or playing 9 holes,” Coach Hirsch said.

On the tennis court there are similar precautions, with a check-in process and required masks if distancing isn’t possible, girls tennis coach Scot Reinhart said in an email interview.

Tennis captain Ava Hedeker, Div. 179, said she had worries about playing tennis during the start of the tournament, but now is ready for practice and the season.

“I definitely did [have worries] in the beginning, because that’s when everyone thought that COVID could spread like on surfaces, so I was really worried then,” she said. “But, I guess as time went on, I was like well I’m really careful about it, I make sure to only touch my balls and I stay away from others. So, I feel like I’m doing my best and that’s all you can really do I guess.”

Bigger changes are required for the only team competing within the walls of Lane Tech — the girls swimming and diving team.

Swimming captain Cecilia Joshi, Div. 152, said the team broke into four groups, one that has practice every day, and the other three who practice every other day, with the hopes of limiting contact between swimmers in case of a positive case.

It did not take long for a positive case to come through, with the team being alerted of a positive case in late August. However, with the separate groups, the team was at least able to partially return to practice less than a week later.

“They haven’t given us all of the details so I’m not sure what they’re doing about the one group that that girl was a part of, but I know that she wasn’t a part of my group, and my group is able to go back,” Joshi said. “So because we separated out the groups and a lot of people on the team didn’t come into any contact with that one girl who had COVID, we’re able to get back to practices faster.”

Situations like an athlete getting the virus were a top priority of IHSA officials this summer, and before they decided that low-risk sports could continue to play, student-athletes and coaches were left to guess on the status of the season.

As the days of July clocked by, Coach Hirsch had no idea whether there would be a season for his team in the fall.

“I honestly didn’t know if we would play or not. My hunch was that all sports would be cancelled, regardless of what they were and where they were played,” Coach Hirsch said.

“Since golf is a relatively safe outdoor activity I was happy when the decision came out that we could hold our season,” Coach Hirsch continued. “We did need to be patient and wait until IHSA and CPS released their guidance and protocols before we could begin the season.”

Golfer Noel Feller, Div. 152, was hopeful about the season, especially after she was able to play some out-of-school tournaments earlier this summer.

“I was banking on that [the IHSA] wouldn’t group us with football as a fall sport,” Feller said. “Football and golf are very different in terms of physical contact. You’re not going to be hitting a golf ball and no one is going to slam into you. So I did see us [having a season.]”

On the tennis court, girls captain Mirabai Sinha, Div. 152, was less confident that a season would happen.

Feller’s guess was correct, now setting up a scenario where student-athletes will be at home all day, and then leave home for practice after school.

The girls swim team is considering an even more ambitious plan — two practices a day.

“We’re planning on possibly doing morning practices and then afternoon practices, so we’d come into school in the morning, and then leave school, come home and do our schoolwork at home, and then go back to school for practice,” Joshi said.

“I know that there will be more time that will be taken because you have to go to school and back twice a day now, instead of only once,” Joshi said later in the interview. “And I guess I will just have to wait and see how e-learning is this semester, because I know last semester I felt like I had a lot more homework than I had before just because when we were doing the Google Chats, we weren’t doing work during that time, so then the teachers would just assign work afterwards.”

Hedeker said she knows that the schedule will be different than usual, but is up for the challenge.

“I’ll just have to learn how to manage my time and that’s one of my favorite parts about being on the team, is not only being able to play so much, but also having just having like a pretty concrete schedule, and it helps me not procrastinate as much for sure.”

Coach Reinhart is also trying to keep practice as normal as possible, in a safe way, for his athletes.

“We are holding practice at the same time as we would if they were in class,” Coach Reinhart said. “I think it helps to keep things closest to normal for the athletes.”

Although this season may look different because of practice changes, new schedules and other precautions, the teams still have a season to prepare for.

The teams and players still are setting goals and getting ready for the year.

“My goal individually is always just to improve,” Sinha said. “I think that’s a lot of our goals — we want to use this time where we have so much time on the court, to get better, and to work together better as a team. A lot of us are playing doubles and we want to work better with our teammates.”

On the golf course, Forbes, who Coach Hirsch said was the only boy to qualify for state last year before the strike didn’t allow him to play, has high expectations.

“Last year we finished third [at city championships] as a school, I think we have a chance to finish at least second, maybe first if we can beat Whitney. So I would be happy. We have a good freshman this year, I think we have a solid team. We should do well. Individually, I would hope to go to state again, so I can actually play there,” Forbes said.

The girls golf team will be going through this season in the middle of a pandemic with new coach — Keith Haines.

And in the pool, bigger changes are possibly in store for the actual season, including virtual meets where teams would stay at their own pools and compare times, according to Joshi.

So, as the calendar flips to September, swimmers, runners, golfers and tennis players at Lane are getting ready for their competitions this year — just with some extra precautions in place.

“I enjoy being outdoors, especially because we’ve been cooped up for so long in quarantine,” Feller said. “The first time I went out, when they finally opened up golf courses, it felt so good, because you’re like outside for five hours vs when we’ve been inside for like five weeks. It’s refreshing. I think any type of physical activity has been a source of happiness more than anything for most people.”