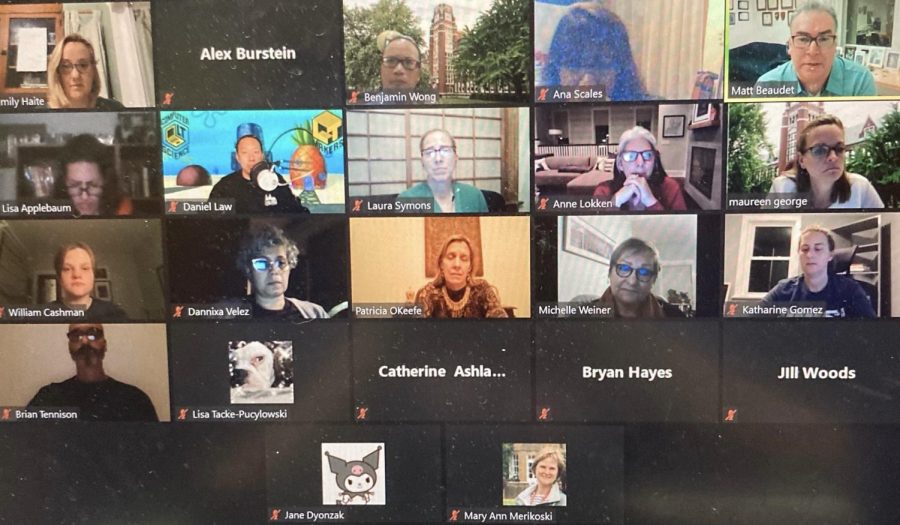 The formation of a new committee tasked with finding a new mascot, a proposal to name the field at Lane Stadium after the first Black quarterback in the NFL, different reports from Lane groups and an appearance from an alderman headlined this month’s Local School Council (LSC) meeting, held virtually last night.

Prior to the meeting, a candidate forum for LSC candidates was held, as a Local School Council (LSC) elections, scheduled for Nov. 19, rapidly approach,

Read the full recap from this month’s meeting below.

Candidate Forum
During the candidate forum, candidates were given around two minutes to speak on why they should be elected. Most of the candidates spoke, even though the parent representatives are the only contested seats (all other categories don’t have enough candidates for it to be contested). Read The Warrior’s guide to LSC elections here.

The Warrior will have more coverage of the LSC candidates in the coming weeks.

During the candidate forum, 47th Ward Ald. Matt Martin, who is alderman for Lane, said that he and his staff were available to help people if needed, talked about his youth council for eight graders to seniors to get involved and said that he was willing to drop into any of Lane’s classes, especially civics classes, to talk about his job and politics.

Public Participation
There were only two public participants for this month’s meeting. One parent thanked the candidates for their statements during the forum so that voters could “make an informed decision when and however we are able to vote.”

The other public participant was another parent who asked about what would happen to Matt Beaudet, a parent representative running for reelection, since his child graduates before the next term is over. The parent questioned why voters should vote for someone who can’t serve the entire term.

Chairperson Emily Haite responded that in the past when someone voted in, got a job with CPS and was no longer able to serve, people were asked to submit applications, and then the LSC chose who takes over the position. There will not be another public vote.

The next report was given by Haite on the Symbol Naming Committee, which is the LSC committee tasked with determining the process for finding the next mascot. The committee is made up of Haite, community representative Maureen George and student representative William Cashman.

That committee planned to form  a new committee made up of about ten students, teachers who are also alumni, and Symbol Naming Committee members will make up this new group.

The plan, according to Haite, is to send out a survey and then have the committee narrow the survey down. The next steps will be finalized when the committee meets again. After options have been narrowed down they might send it back out to the students, the whole community or just the LSC.

“It is something that we ideally would like to get it all figured out as quickly as possible,” Haite said.

Tennison began by about the PSAT that Lane hosted on Wednesday, which he said was attended by about 500 juniors. Tennison said that the testing went “fairly well.”

Tennison also brought up the virtual tutoring that is supposed to start on Monday Oct. 19, according to an email sent out to Lane students today. Tennison said that Lane received “very strict guidelines from CPS in terms of keeping students safe and how to do tutoring.”

Because of this, there is a minimum and maximum number of students that can sign up, according to Tennison, who said “we’re very excited to start to roll this out.”

Also brought up during the principal’s report was the upcoming professional development for teachers in November. Tennision said that the staff and teachers will be reading and discussing “How to be an Anti-Racist” as a part of Lane’s continued equity work for the school.

Tennison also announced that counselors have their schedules open for students and said that social worker and counseling services are still fully available to students. Tennison mentioned the Friends of Lane October Meeting, which focused on suicide prevention and mental health.

During last month’s LSC meeting, Tennison talked about the increase in security cameras in the building. He said that the wiring has been completed, and now cameras are still being installed.

Tennison closed out his report by talking about how the administration has been checking in with classes and teachers during remote learning. He agreed with Beaudet’s concerns over too much homework and screen time and said each class should only be having 60-90 minutes of homework per week, but also said he wanted to commend the teaching staff because everyone has had to adapt.

Tennison said the State of the School Presentation, which outlines the condition of Lane, “will still be expected and that will most likely be in December.”

LSC teacher representative Katherine Gomez, who reported on the PPLC, said there was a quick organization meeting for the school year last week. According to Gomez, “a lot of our teachers ran and were re-elected for this year.”

The PPLC is in the process of ordering a book called “Grading for Equity,” which  focuses on “inconsistent grading practices and the ways they can inadvertently perpetuate the achievement and opportunity gaps among our students,” according to Corwin, an education publisher.

“Everyone on our PPLC is really excited to read and start digesting and discussing,” according to Gomez.

Gomez concluded the report by saying that she thinks that it is going to be a great year and announcing that the next PPLC meeting is going to be on Oct. 29.

Friends of Lane was scheduled to have a report, but no representative from the group came to the meeting. For information on Friend of Lane’s October meeting, read this recap.

Michelle Weiner, the Lane Tech Alumni Association president, said that the association finished up their scholarship season last school year with $181,000 split between 31 students, all of whom are in a post-secondary education program now.

Over the summer, the Alumni Association installed the new Vietnam Memorial plaque in Memorial Garden. The previous plaque, dedicated in 1983, did not include the names of two additional alumni who were killed in the Vietnam War.

Now, the number of alumni on the plague is 25. The association is waiting for it to be safe to train JROTC cadets and perform a virtual dedication ceremony.

Weiner said they are looking forward to seeing what applications come back.

According to Weiner, in the first ten years of the grant and scholarship programs the Alumni Association has awarded about $260,000 in the teacher grant program and $2.2 million for the scholarships for Lane seniors. This year, there was a record number of applications for the scholarships.

Today is the virtual cemetery walk of Rosehill Cemetery where the Albert G. Lane family plot is located. The event sold out in 12 hours, “largely because it was free for members,” according to Weiner.

First, in September 2021 it will be 50 years since girls were allowed to attend Lane. Weiner said they have a “committee of some pretty feisty women” who are planning activities and an exhibit for the community.

The second major project is an effort to name the field at Lane Stadium after Frederick Douglass “Fritz” Pollard, a Lane alum who became the first Black quarterback and coach in the NFL. The Chicago Sun-Times did a story on the potential naming, which Weiner says the Alumni Association will fund and properly dedicate.

The association is working with people at CPS and Lane’s athletic director Nicholas LoGalbo to work on this.

Although the LSC does not have any control over the name, Beaudet recommended that there should be a resolution at the next LSC meeting to show the LSC’s support of the movement, which other members agreed with.

Check Approval
School clerk Jill Woods presented one check approval for $47,632.85 to fix a problem with books ordered in January. English books were supposed to be shipped from three Follett warehouses, but the order was cancelled at one warehouse, so part of the order has to be paid again.

The expenditure was approved back in January, but CPS and Follet asked Lane to wait to place the order, and Woods wanted to present it again since it’s a new fiscal year.

Tennison made it clear that the money was from last year’s school budget, not this year’s.

The purchase was passed unanimously.

Safety
In addition to the security cameras which Tennison discussed in his principal’s report, he and Haite are meeting with Alderman Martin and a representative from District 19 police today to discuss school safety.

Announcements
Haite says as soon as the LSC hears about how the LSC elections are going to happen, she will make sure to disseminate the information. Haite said she’s been contacting downtown “every couple weeks,” and there’s still no decision.

Corrections: A previous version of this story incorrectly stated that a new Vietnam War Memorial went up this summer with two names on it. The memorial was updated this summer with two additional names that were erroneously omitted when the memorial was originally dedicated. Also,  the Alumni Association is looking to name the field at Lane Stadium, not rename the stadium. The story has been corrected to reflect these changes.