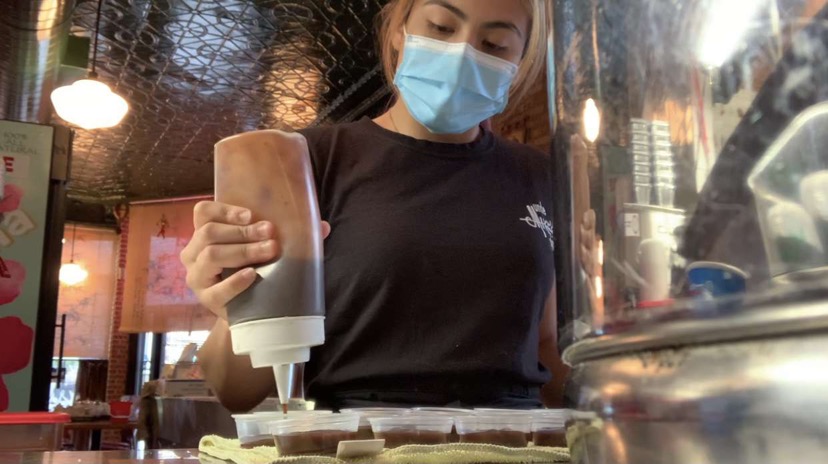 Stephanie Cazarin has been working for two years now. This year, due to COVID, Cazarin is now required to wear a mask during her entire work shift. (Photo Courtesy of Stephanie Cazarin)

It is 4:30 on a Saturday morning as Stephanie Cazarin’s alarm goes off, reminding her that she needs to wake up to go to work. After a six-hour shift and an hour-long car ride, Cazarin makes it back home feeling drained, causing her to push her homework off to the next day.  Despite the difficulties that come along with having a job while in high school, Cazarin knows that it is worth it.

Cazarin, Div. 183, started working as a waitress in a restaurant at the beginning of her sophomore year. She first got the job because she believed it would teach her how to be responsible and support herself financially.

“I always thought that earning my own money and being able to support myself would be a great achievement,” Cazarin said.

According to Child Trends, 20% of youth enrolled in high school were employed in 2018. Like Cazarin, other high school students are also employed.

Stephanie Huizar, Div. 183, is an employee at an ice cream shop. Huizar started working over the summer after she found herself having a lot of free time at home during Gov. Pritzker’s Stay-At-Home Order, which began on March 21 to prevent the spread of COVID-19.

“I just wanted to get out of the house and do something productive,” Huizar said. “I also wanted to get an early start to working and I felt like it was the perfect time to do it.”

COVID-19 not only gave people more free time, but it also made changes to the way that people work.

Yohhani Monzon, Div. 172, started working at a fast-food restaurant at the end of her freshman year. Since she has been working at the same place for almost three years now, Monzon has become accustomed to the rules at her job. But this year she had to adapt to the new COVID-19 restrictions set in place to prevent the spread of the virus.

According to Monzon, all employees at her job are now required to wear a mask and get daily temperature checks. Additionally, employees can only serve food through the drive-thru and are not allowed to open the inside of the restaurant to customers under any circumstance.

These changes, according to Monzon, have made working during the pandemic a lot safer.

“I feel like now there is less stress for us because it used to be so busy with the drive-thru and the lobby,” Monzon said. “If it was open, it would just be too chaotic and harder to make sure that people are socially distant and have their masks on.”

Just as COVID brought changes to people’s workplaces, having a job can also change people’s schedules.

Now that Monzon, Huizar and Cazarin spend less time at home after school because of work, keeping up with homework, projects and other assignments for their seven classes has been difficult. To Huizar, this is because she is too concentrated on serving customers and completing her tasks at her ice cream shop that she just does not have time to think about school or homework.

Attempting to get enough sleep after coming home late from work has also been a reason why keeping up with school work is difficult.

Work not only impacts a student’s school life; it may also change their social life.

Whenever Cazarin’s friends wanted to go out when she first got her job, she would have to remind them of her hours. If everyone was not able to meet up at the same time, then the plans would ultimately be canceled.

Even though there are social challenges to having a job, Monzon finds that being at work has allowed her to be more social and outgoing, which is something that remote learning has made difficult.

“It is good to have other people around me rather than just being home and doing things online,” she said.

For Cazarin and Huizar, having a job has also taught them valuable skills.

Earning money, they say, has taught them the importance of managing and using it wisely, which was something that they did not know much about before.

Dealing with customers and working with different kinds of people every day has also improved their patience and communication skills.

These new skills have also better prepared Monzon for leadership positions in her extracurriculars.

“When I first got in OLAS [Organization of Latin American Students], I was really shy and kept to myself because I was new,” Monzon said. “But once I got the hang of things, I was in charge of teaching choreography and making sure that everyone knew or kept up with the choreo. [Working] has definitely helped me talk to people and communicate with my team.”

To Monzon, working improved who she is.

“You learn skills that can help you in school and in your everyday life and you get to keep them forever,” Monzon said. “ You just become a better person.”