Time for a shot clock? Some Lane basketball coaches and players think so 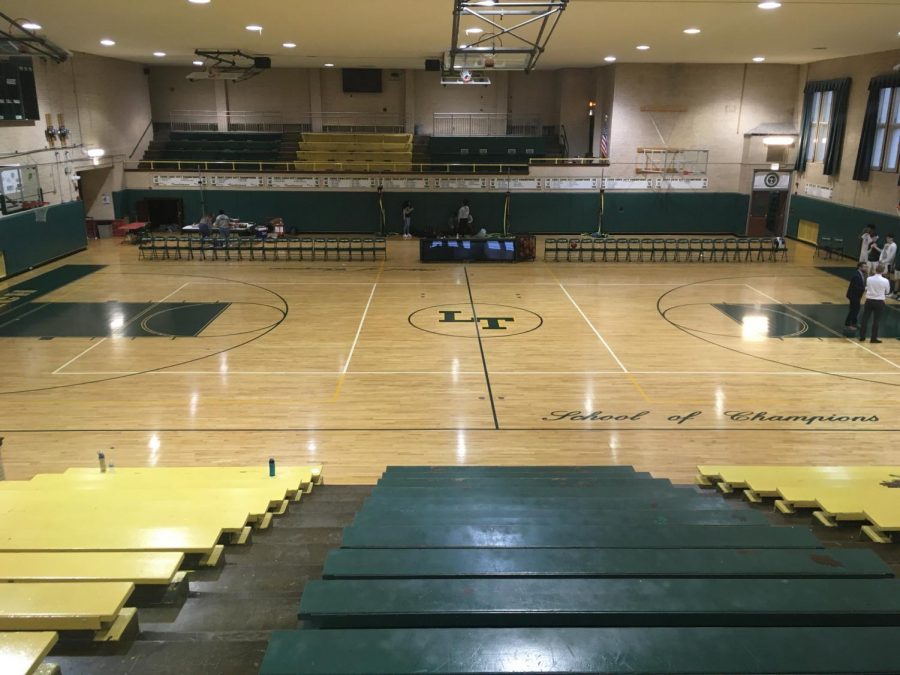 Lane Gymnasium before a January 15 varsity boys basketball game against Westinghouse. A new proposal is hoping to add shot clocks to high school gyms across the state, but the decision is still left to be decided by the IHSA Board.

As the Illinois High School Association (IHSA), the state’s governing body for high school athletics, was faced with the decision of whether high school sports should return this fall, another debate was brewing across the state during the summer.

Boys and girls high school basketball coaches and fans in Illinois were tweeting, polling and writing for why they think Illinois should, or should not, implement a high school shot clock, a clock that limits that amount of time a team can have per possession. Currently, there is no time limit for a team’s possession.

Georgia became the ninth state to have a high school shot clock this summer, according to The Covington News.

The shot clock, some coaches argue, will increase game speed and better prepare student-athletes to play in college. However, some coaches think it will cost too much to install and operating the shot clock will be difficult. There is no timetable for the Board to approve or deny the shot clock.

Lane boys basketball head coach Nicholas LoGalbo is among the coaches leading the charge for a shot clock. He, along with other in-state coaches, helped poll over 700 IHSA basketball coaches this summer.

The results were overwhelmingly in favor of the shot clock, with 71.5% of responses saying they support the shot clock, including 74.5% of boys coaches and 68.2% of girls coaches.

“Across the world, everyone, including high school and even youth levels play with a shot clock,” LoGalbo told The Warrior via email. “It is a part of the game and it is needed!”

The enthusiasm is not contained to LoGalbo in the halls of Lane. Boys varsity assistant coach Matthew Villanueva and girls varsity head coach Megan Molloy both are on board with the implementation of the shot clock.

“When I went and played in college, the hardest thing for me was adapting to the shot clock because it was just such a faster pace,” said Molloy, who played at Dominican University. “But, you know, once I got used to it, it was great because the game of basketball is supposed to be a fast-paced game so it really helps keep up with that.”

Four coaches, none from Lane, presented to the IHSA Board of Directors in August on the “possible implementation of a shot clock,” according to the Board meeting notes. The notes also said that “the Board and IHSA staff will work with the presenters on potential next steps.”

Now, all that is needed is IHSA Board approval, according to LoGalbo.

Although coaches have been primarily leading the charge, the implementation of a shot clock would affect a different group of people even more — the student-athletes.

Girls varsity basketball player Molly Joseph, Div. 179, is in favor of the shot clock, since there is one in college. She says a high school shot clock would help develop athletes to play in  college.

But Joseph doesn’t think that every high school player needs the shot clock.

“I don’t think that it should be for freshman and JV,” Joseph said. “But I think once you get to varsity, there should be one.”

“I feel like freshman and sophomore year a player is still adjusting to high school basketball, in terms of how much faster and more physical it is, but I think by varsity a player should start preparing for college basketball (if they want to play) and having a shot clock will prepare them for that more,” Joseph said in a follow-up text interview.

Not everyone on the girls varsity team shares that same optimism. At the time of the interview, Joseph said that in a poll presented to freshman, junior varsity and varsity players, 15 girls said they supported it and nine said they opposed it

Joseph said that while talking to teammates, one argument that has come up is how the shot clock could technically help Lane if they are able to stall in a close game.

Another argument that Joseph has heard is that the shot clock will be too expensive, something that she has thought about as well.

“It would be expensive for all the gyms,” Joseph said. “And I think Lane would be able to handle it, but there [are] definitely some schools that wouldn’t. I know a lot of schools I’ve played at don’t even have very nice gyms and they don’t have money to update them. So, having to put in a shot clock would be even harder on them.”

LoGalbo is less worried about the pricing.

“There are several numbers floating around but we contacted several shot clock manufacturers and there are several options,” he said. “At the end of the day, it would cost probably about $3,000, but [schools] wouldn’t implement it for a few years once it is passed so there is time to fundraise. Also, we have had some conversations already about donations and fundraising to help schools that would have trouble finding the funds.”

A problem that Molloy brought up is having trained people to run a shot clock, which can be complicated to run. According to LoGalbo, only one person will be needed to operate the shot clock during the game.

“That’s just I feel a lot of pressure on a high school student to sit there and do that,” Molloy said. “So, maybe it would need to be a parent or hiring someone cause sometimes I feel bad for the people doing the clock. Like they’re getting yelled at from both sides and [they are] just high school students, so that’s not very fair.”

Even with challenges on the horizon, that’s not stopping players and coaches from imagining what it would be like playing with a shot clock.

“I just think it would make it more competitive, once again make it faster and then just prepare athletes for college even more,” Joseph said. “But I don’t think it should be as short as it is in college, cause I know like women’s college basketball it’s 30 seconds. I think it should be around like 40 seconds.”

LoGalbo said that the current plan for the shot clock is 30 or 35 seconds, but that that number is up for discussion

Villanueva, who graduated from Lane in 2011 and played on the varsity team, can envision the changes players will need if the shot clock comes to IHSA.

“A challenge for [the players] is being aware of the clock, while at the same time being crisp with everything that’s going on in the court,” Villanueva said. “So for sure that will be one [challenge]. But, like I always keep harping on, in practice, we’re probably going to have to drill a lot of shot clock plays, we’re going to have to just use them wisely and hopefully, you know, translate well to games as well.”

The coaches also will have some changes to make, according to Villanueva.

“There’s a lot of things offensively that we will have to put a bigger emphasis on,” he said. “But even thinking defensively, just focusing in for those 30 seconds is going to be a big change that we’re going to see right away if we do get that shot clock. … And just offensively we’re going to have to put a greater emphasis in practice on making our plays crisp, making everything on time and every detail is going to matter, and it’s just going to really show once that shot clock gets put in.”

Villanueva also thinks the change may make more teams switch from man-to-man to a zone defense. But, he doesn’t think that Lane, a team that has primarily done man-to-man the past few years according to Villanueva, will necessarily change their defense.

“In terms of the shot clock, I don’t think that’s going to really affect what we do in terms of defense. We’re always going to be what we are as a team,” Villanueva said.

Coach Molloy doesn’t think the shot clock will affect her coaching much.

“I mean mentally, right, it might be a little bit easier to coach for defense cause you’re like, ‘ok, you guys, it’s 30 seconds of defense, like that’s all.’ And then it would actually work better for, I like to run a transition offense, so I think it would work well for us to really push the ball. Now they see why they have to push the ball,” Molloy said.

“I also think it would help for games against schools like Whitney Young where they can hold the ball and pass it around,” she continued. “So, for those games where you’re used to kind of getting mentally beat in that regard, it might make it a little bit easier. So I guess I wouldn’t change much because I like to push the ball, so it would work in my favor, in our favor.”

For now though, players and coaches are left to wait until the decision of if, and when, the shot clock will be implemented.

Joseph, a senior, doesn’t think she’ll likely get to play with the shot clock during her high school career.

“I mean maybe the current freshman [will get to play with it], but I mean I guess just in Illinois, it makes it a little easier,” Joseph said. “But still with all of the CPS schools just in Chicago and even all just the private schools in Chicago, that’s already a lot and I think it would take the IHSA a lot of work to fully get that running throughout all schools.”

But even with the uncertainty and lack of a time table, Molloy still believes that the shot clock will come to IHSA.

“I feel like the IHSA is pretty good about listening to what the coaches want and value what the coaches want, so you know if it’s being pushed on both sides, cause I’ve gotten some calls from our regional director from CPS asking about my opinion on it,” Molloy said. “So, if we’re getting pushed on both sides, for girls and boys, I think that they’ll listen.”