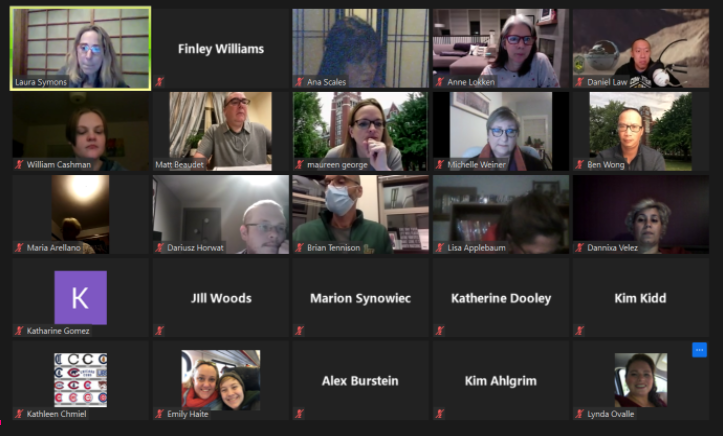 The Lane Tech LSC met via Zoom on Thursday for their November meeting. (Screenshot from November LSC meeting)

At the November Lane Local School Council (LSC) meeting, Principal Tennison reported on Lane gym renovations and a return to school for the Cluster Program, the Lane Tech Alumni Association said they are getting closer to gaining approval to dedicate the field at Lane Stadium to Fritz Pollard, the symbol renaming committee announced their intention to name a new mascot by the end of the year, and much more.

Principal Brian Tennison gave a detailed report on the state of things at Lane, covering everything from school renovations to the latest COVID-19 updates.

Tennison started by recognizing the work by the BIPOC Advisory Committee, saying it was a great example of student voice and example. The committee created this week’s advisory lesson centered around Black Lives Matter.

He went on to talk about greeting the new Lane teachers. He added that tutoring is still going on for students, and also mentioned that Lane teachers had their first professional development day talking about the book “How to be an anti-racist,” where the teachers were also shown a video made by the BIPOC Advisory Commitee.

Tennison said that counselors are having meetings with students and are continuing college readiness advisory lessons, and mentioned that work has begun on Gym 1, after Lane had set aside money for two years. Among the renovations are new lights.

He also discussed a meeting he had with 47th Ward Ald. Matt Martin, the director of the local Chicago Police Branch, LSC Chairperson Emily Haite and the principal of nearby DePaul Prep, to discuss the relationship between Lane and DePaul, as DePaul moved their campus even closer to Lane.

Tennison talked about the CPS announcement that winter athletics are postponed until further notice. He also said that they are trying to reduce the number of staff members in the building, and that this may result in communication difficulties when contacting the school.

Tennison reported that school social worker Laura McLaughlin-Kantowicz is working with the Culture and Climate Team to make sure they are including mental health in professional developments for teachers. They are also trying to make a robust mental health and counseling section on the website.

Tennison concluded with a remark about the Cluster Program, which is set to return to in-person learning on Jan. 11, as CPS announced earlier this week. He did not have a definitive answer as to whether the Lane Tech Academic Center will return with the rest of elementary schools on Feb 1.

Teacher and LSC Member Katharine Gomez said the committee has started reading “Grading for Equity” and they are discussing how it relates to Lane, its diverse student body and remote learning. Gomez said they are meeting again Dec. 3.

Lane Tech Alumni Association (LTAA) President Michelle Weiner gave an update on the four major projects that the LTAA is working on. First, Weiner talked about the 2nd annual Snow Bank, which is a winter clothes drive. Weiner said there is a registry for it at Target and Amazon, and then there will be a drop off day next Saturday, Nov. 28, at the Lane Tech Alumni Association office at 3525 W. Peterson Ave. Weiner said the LTAA has collected 150 items already and they’re hoping to get to 200. Last year, Weiner says, there were about 265 items donated.

Weiner also gave an update on the fall grant cycle, which she said is almost over. She said 17 teachers and faculty were awarded a total of $14,000-$15,000 that will be used to purchase materials that will expand students’ learning.

Additionally, Weiner talked about the initiative to dedicate the field at Lane Stadium to Fritz Pollard, a 1912 Lane graduate who was a pioneer in the NFL, being the first Black quarterback and the first Black coach in the league. Weiner said that she and Lane athletic director Nicholas LoGalbo gave a presentation to the CPS sports administration team on Oct. 27 and received “rave reviews.” Now she said they are hoping to get the green light soon from CPS soon to go into the design and fundraising process. Later in the meeting, Weiner said Lane graduate Lanken Tomlinson, who is now an NFL player for the San Francisco 49ers, has agreed to be honorary chair of the committee.

Weiner wrapped up the meeting by talking about the 50th anniversary of women being admitted into Lane, which is coming in September 2021. She said a committee has been working since this past summer, and they are researching 1970 and 1971 to document the events surrounding Lane Tech becoming co-ed. She said they are planning an exhibit and other events.

School clerk Jill Woods submitted two purchase orders, both of which were approved unanimously. The first was a $10,790 payment to Loyola University to cover the cost of 40 students’ dual-credit classes. The second was a $27,632.50 purchase of gym uniforms. This order was originally approved in SY 2019-2020, but because of the pandemic, the vendor was unable to provide the shirts until the end of August. In light of this, CPS canceled the original purchase order and asked the school to reapprove the order in the current school year.

The LSC unanimously approved three fundraisers, all from Friends of Lane: one to begin their annual appeal, which will run from November to Feb. 21; the second to continue fundraising for the Holiday Staff Appreciation Luncheon, which will this year likely take the form of gifts for staff; and the last to sell tickets to Laugh Out Loud at Lane, a comedy event that will take place in the first few weeks of January, according to Friends of Lane representative Deborah Shelist.

Maureen George, a community representative on the LSC subcommittee charged with creating a new symbol for Lane since the Indian mascot was removed this summer, announced that the committee now consists of three students; Assistant Principal Ms. Thompson; Brian Telles, an English teacher; and Michelle Weiner, the President of the LTAA. George added that the committee is looking for a ninth member in order to maintain an odd number.

The committee had their first meeting Nov. 17 and will meet every two weeks thereafter. They are currently working on delineating the difference between a mascot and a symbol, and defining what a symbol should mean to a school. They plan to have picked a new symbol by the end of the year.
Announcements
Principal Tennison wished everyone a happy Thanksgiving and reiterated that it is a “no homework holiday,” and several council members commended teachers on their adaptation to virtual learning.

Tennison concluded by saying that all LSC votes will be counted on Dec. 1.