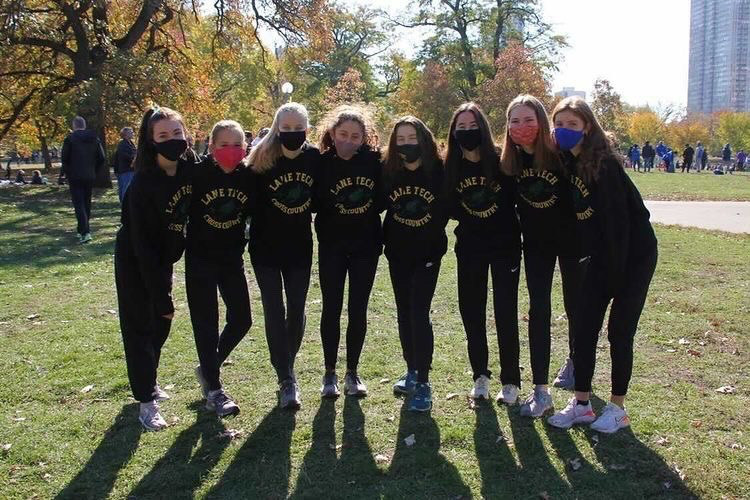 Despite cancelled meets, smaller practices and more challenges that came with carrying out an athletics season during a pandemic, girls cross country captain Sophia Rivera, Div. 157, said she thinks the team still improved a lot throughout the season.

“I think individually we all got stronger,” Rivera said. “We all kind of realized how nothing was permanent. We got to appreciate our meets a lot more and I think we overall improved a lot more than in previous seasons because nothing was for certain, if we were going to have another meet or, you know, have another practice.”

The improvements paid off, leading to a CPS city championship for the girls varsity cross country team for the second straight year. The team placed all seven of their varsity runners in the top 17 en route to a two point win over Payton.

“We weren’t really sure if we won right away, so it was like a lot of waiting around, and once we found out we were all really relieved and happy to know that we won, again, for the second year in a row,” Rivera said.

The team, which also won city championships at the freshman and junior varsity levels, had to navigate staying healthy and staying competitive throughout the season.

“We weren’t naive and you know [running during the pandemic] was the elephant in the room every day,” boys and girls cross country head coach Kris Roof said. “But I think that, you know I don’t want to speak for the kids, but I think we had to get in a routine, and that routine had to follow all the COVID protocols.”

COVID-19 had an impact on state regionals and sectionals, as well. Instead of past years where all the runners would run in the races, Roof said that this year the runners got split into multiple races so there were fewer runners in each race.

“It was a tough transition for them to all of a sudden run with one teammate now instead of their pack of six,” Roof said.
Lane ended up placing second at regionals and eleventh at sectionals, both which were hosted by Whitney Young and held at Lincoln Park, 1800 N. Stockton Dr., Chicago.

“I would say overall we were happy,” Rivera said about the team’s regional and sectional results. “Not that everyone had their personal best or anything. But I think as a group we did well overall.”

Now, with the season over, some of the runners and coaches are shifting their focus to track and field season.

“I’m confident there will be an outdoor season,” Roof said. “But it will be shorter than usual and I don’t think there will be an indoor season at all. I am super, super wishful that there is one and we’ll do everything we can to facilitate that whenever CPS tells us what we can do. The kids are already working hard and they’re doing some club stuff right now, starting this week, to get on track, and we provide workouts on our team [Google] Classrooms throughout the winter.”