How I-Days clubs are adapting to remote learning 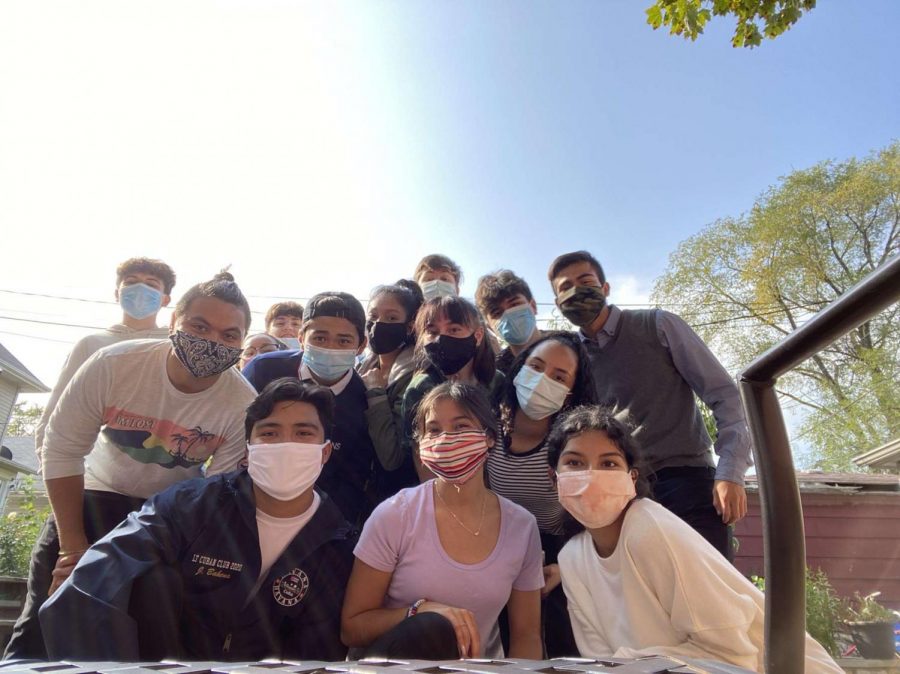 In a normal October, students would be in the hallways, lunchroom or dance room trying to learn an I-Days choreography to hopefully snag a spot in one of the clubs. Members of these clubs would be thoroughly teaching each step of the dances and encouraging students to come back and audition to join their clubs. Auditions would be held in groups and once certain students are accepted, they would begin practicing every week for the big event in March.

On March 13, Gov. Pritzker issued the closure of all schools to begin on March 17 due to the rise of COVID-19 cases in Illinois. Because of this, I-Days and I-Nights were canceled despite only having one day of the event. Ever since then, I-Days has been in a sort of purgatory until the new school year began on Sept. 8 through remote learning. In the following months, I-Days clubs have begun to hold auditions again, but in a completely different setting.

The clubs changed to a mainly virtual setting, with the exception of a few clubs who decided to have in-person practice. Due to the pandemic, the presidents are focusing more on making everyone comfortable by playing different games together, learning more about the culture they represent and having club outings (when possible) in-person.

“We decided to do a YouTube video. So we did choreography specifically for the girls’ part or the followers’ part and then for the leads or the guys’ part. And we uploaded it on YouTube on our Cuban Club channel and then from there we just directed everyone to come and to try out and email us their audition,” Castro said.

“When we came on to it, we had to use our social media, our school newsletter and our members as ways to promote the audition for the club itself,” Nsangou said. “The specifics of it: we would have the people who were interested reach out to our Instagram, and to say they wanted to audition for the club. Then they recorded their videos of them dancing to one of our choreographies and then they submitted it.”

Both clubs acknowledged that a significantly fewer number of people tried out compared to in-person auditions, making it harder to choose members. However, because club officers could not teach the steps in person, they were lenient with those who did try out, and club presidents weighed effort and personality more heavily than perfecting the steps.

“We both look at personality and dance because it’s not just all about the dance itself, but it’s about how they are going to benefit our club as their environment and create more of a family,” Castro said.

For practices, normally students stay after school and practice somewhere inside of Lane or in some cases at Dance Connection or Dance Center Chicago, according to several I-Days participants from last year. Because schools and other public facilities have been closed to prevent the spread of COVID-19, I-Days clubs have resorted to doing practices through Google Meets.

Cuban Club, for example, started with Google Meets every Friday to form bonds instead of delving right into learning choreography for the event in March.

“Once we accepted our new members, we were trying to figure out how to involve them because at that time COVID was still kind of hitting harder and so we decided not to meet with them at all,” Castro said. “For a good month, I think every Friday, we would do our Google Meets and we would play games with them and that’s how we got to know them. We got to know them virtually at first. Little by little they started getting more involved and finally we started practices.”

They decided to take the next step and try in-person practice outside of school, while keeping relations with Lane out of the picture to avoid conflict. This was a gamble at first because the presidents weren’t sure if this was something everyone was comfortable with, so they reached out to members and their families to get feedback. After getting approval from the majority of their members, they proceeded with in-person practice. They livestream their practices through Google Meets for members who are not comfortable with in-person practices, as well as for those who can’t make it to practice a certain day.

“Just because, if it was associated with Lane and a parent were to get mad about us meeting up, then it could fall back on Lane, who had no clue that anything was going on. And that way if we’re not associated with Lane or whatever they have deniability,” Parrish said. “But at the same time, we also wanted to make sure that everyone’s parents were OK with it. And we tried to make sure, OK if something were to happen, it’s not on Lane. It is not a Lane thing; this is us.”

On Nov. 12, Mayor Lightfoot and the Chicago Commissioner of Public Health issued a stay-at-home advisory that was effective starting Nov. 16, which forced Cuban Club to stop in-person practices. They said they hope to start in-person practices again after the restrictions are lifted, but they’re glad that they’ve been able to bond so well virtually and in-person due to club outings and practices.

“Just hanging out together in a non-practice or studio context, it was relaxing and fun and we all got to bond with each other,” Parrish said. “I feel like also at the practices because a lot of times we’ve been trying to do things where we all come up with different choreographies together and that also allows a lot of bonding.”

Instead of having in-person practices, Japanese Club decided to have practices through Google Meets. This year, they created a new system to adjust to the situation.

“We broke up the club into departments. So instead of dancing every year, this year we have departments where if we were going to put together a video then we’ll have a department for cooking, culture department, dance department because we still want to keep that, and a social media department,” Nguyen said. “Each department manages different aspects of that. It helps interact with the new club members because we are not able to meet them in person. And if we were to put it in a video, then each department would showcase what they’re in charge of.”

For the time being, Japanese Club has been focusing on getting to know each other through rotations of these departments. They’re not learning the dance because their choreography is separated into divisions and it is difficult to teach these parts online.

“Given that a lot of the members can’t leave their homes due to safety concerns, we have not put an emphasis on the dance aspect itself and we’re just trying to see other things we can do,” Nsangou said.

Both clubs’ presidents said they are trying their best to keep themselves and everyone else motivated despite all the adjustments. Castro and Parrish have made an effort through many activities to keep new members energized and feel more welcome to the Cuban Club family.

“For sure, checking up on them is the one thing,” Castro said. “They feel more involved and want to come to practices if you actually try to get to know them, so that’s the one thing. But also keeping them motivated is just playing weird games where they feel uncomfortable at first but at some point they just laugh it out. It becomes memories. Those are just some of the things we do and basically, any crazy activity that you can possibly think of, we’ve probably done it.”

Nsangou and Nguyen emphasized the importance of leadership and how their energy reflects on the Japanese Club members. They try their best to set an example for everyone while encouraging them to have fun through the departments they created.

“As presidents, we have the responsibility to keep the club together and our energy also reflects on the club. If we keep it up, they’ll keep it up,” Nguyen said. “They look up to us for direction and guidance. We have to keep our energy up for the club to operate.”