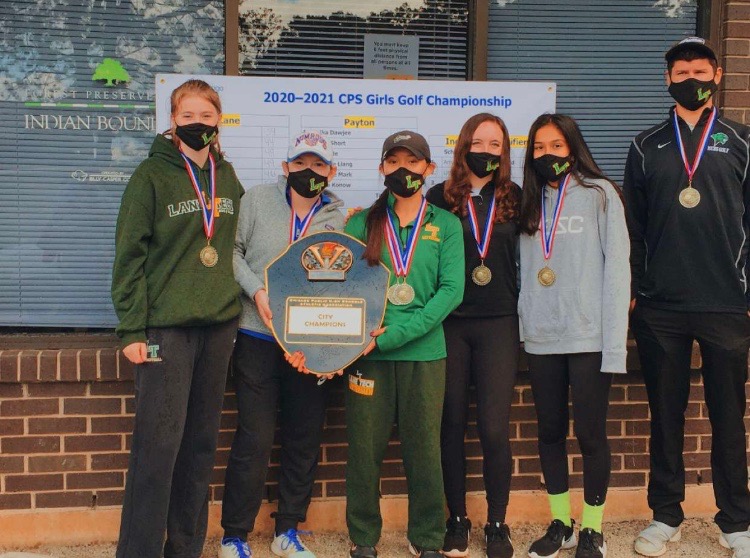 A year after finishing second at CPS city championships, the girls golf team, under a new coach, was able to break through and take home the title.

The team was led by Noel Feller, Div. 152, who won her third consecutive individual city championship in addition to the team title.

Head coach Keith Haines was hired this summer and, according to Feller, was extremely helpful to the team.

“Our new coach was amazing. …That really helped our team a lot, because he was able to instruct us very closely and was able to help us improve our game individually, and I think that helped each of the girls a lot,” Feller said.

The team placed first at city qualifiers at Caldwell on Sept. 28, and had a quick turnaround, competing in the city championships just two days later at Indian Boundary.

“I had a feeling that based on our matches and how the girls were playing towards the end of the season that we had an opportunity to win. … It would come down to if each girl would just execute and you know play within their skill range and luckily we were able to get it done,” Haines said.

Despite the expectations heading into the city championship, the victory was sweet, according to Haines.

The golf season, with a few small changes such as electric scoring, was mostly able to go on as regular during the pandemic due to the spaced out nature of the sport,

“I feel there were not that many bumps in terms of golf season with COVID because the only thing that was different was that we were getting temperature checks,” Feller said. “But, other than that we still did the same thing, because everyone was still far away from each other because that’s just how golf is.”

The state championship was not as lucky, getting cancelled due to COVID.

However, regionals and sectionals still happened, and Feller, a senior, closed out her high school career on a high note.

Feller took home the St. Ignatius regional individual title, with the team placing third overall, and then tied for 14th individually at the Rolling Meadows sectional. Feller, who qualified for state last year but was not able to compete because of the strike, said that she would have qualified for state again this year.

“I wish we had a state just for the experience of going to state, but I worry that I might’ve just done really badly at state and regretted ever going, if that makes sense,” Feller said. “It’s relieving to know that I left off on a good note.”