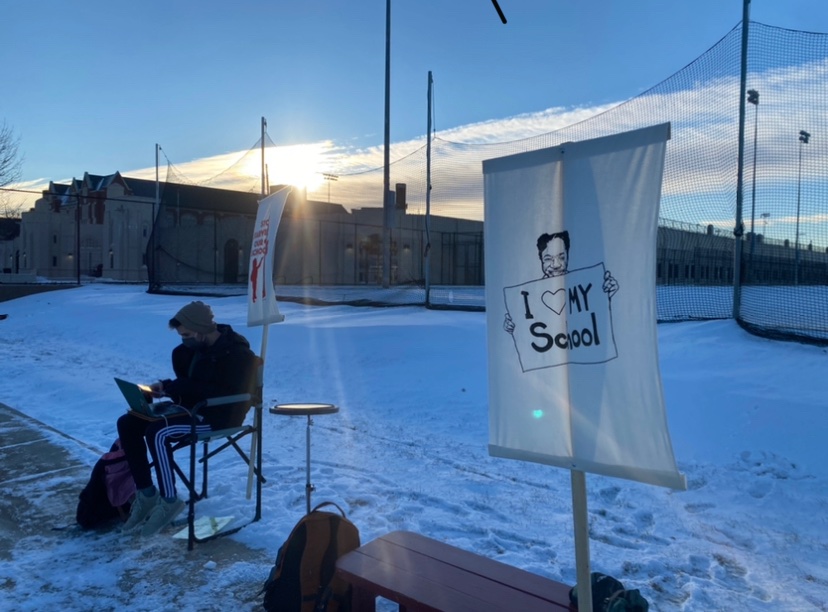 School reopening was the hot topic of the night, and although limited information is known about a high school return, both public participants and LSC representatives still had plenty to say, including on the Lane cluster program, which has returned to in-person learning. Teachers sent a strong message during public participation that they do not want a return to school as the city continues to see high positivity numbers, while parent representatives remained hesitant to put anything in writing regarding high school reopening without first consulting the parent community.

In addition, Friends of Lane gave an update on their fundraiser, the LSC officially voted to send a letter to CPS in support of the Lane Stadium field dedication and much more. Here’s a full recap:

Before public participation commenced, Chairperson Haite said she had received 5 emails about removing “racist imagery” at the school, such as the totem pole between Doors A and D; the Memorial Garden statue of a Native American; and the fire curtain in the auditorium, which depicts a Native American. Haite said these can’t be removed by the LSC because they are overseen by the CPS Department of Arts Education, but people can formally request removal to the CPS Director of Arts Education.

Following this, the 22 public participants each got their time to speak.

Of the 22 public participants, only the first two speakers, both Lane parents, were amenable to returning to in-person learning. Both said they had not heard enough from CPS about a high school reopening, and that there are safe ways to do it.

The next twenty speakers, the majority of whom were teachers, gave stories of loss and provided countless points, from inequity to CPS lying to parents and media, all to say that now is not the right time to return.

The public participation comments are as follows:

Principal Brian Tennison gave his monthly principal’s report at the meeting. Tennison started off by saying everyone should appreciate the difficulty of the situation that teachers are in at this time.

He also commended clerks, custodial staff and security. Tennison said he knows the big struggle is monotony and screen time. “To students, I want to say, ‘Hang in there.’”

Tennison said that no one has yet heard concrete plans about high school reopening, and that the only parameters he could access were the ones that CPS provided over the summer, which included only freshmen and sophomores returning, and learning in pods of 15. He said students would need to be reprogramed for this pod set-up because they’re not podded currently. He also reminded everyone that because Lane is a CPS school, it must follow CPS policy.

Tennison acknowledged Illinois High School Association’s (IHSA) and Illinois Department of Public Health’s (IDPH) ruling on some low-risk winter sports returning in Chicago, but said that CPS has not made an official statement. While athletics for parts of the state are supposed to start next week, until he gets an official email from CPS, Lane cannot start sports. He added that if he gets an email on Friday that says sports can begin on Monday, they won’t be able to open until Wednesday because the school needs time to prepare. He also said that student-athletes will receive athletic information from coaches.

Tennison also addressed CPS contact tracing. He said that Lane itself does not oversee that service, and when there is a COVID-19 case reported at the school, he simply receives a notification. This comes after a case was announced this past week. Tennison said he has no idea who it is.

When talking about graduation, Tennison said that nothing is concrete, but he is assuming that we’ll not all be gathering in a closed space for graduation. He said Lane cannot, at this time, book a graduation venue, per CPS rules. He said there will at least be a ceremony with a drive-through, and he is waiting to see what CPS guidelines are.

Tennison’s final remark was that the school got a large shipment of air purifiers in the case that high schools do return.

Teacher Representative Katharine Gomez gave the PPLC report. Gomez said the PPLC is continuing to examine equitable grading practices. The committee discussed the power of giving students a zero and is searching for more positive alternatives. They also are identifying which grading practices are effective and which can be improved to help increase student success.

Chairperson Haite gave a very brief report on the Renaming Committee, tasked with finding a new symbol for the school. Haite said that the Committee is hoping to get a survey out in February, once finals are over.

Parent Lisa Borelli gave this month’s Friends of Lane report. Borelli said that Friends of Lane wants to help with the technology needs of being remote. Borelli went on to say that the Annual Appeal has been focused on students’ and teachers’ technology needs. Friends of Lane has raised $183,000 to date, she said, which is down from what they normally make, but they are “grateful and humbled” because they know that many people are struggling.

Friends of Lane is also looking to get technology for the music department, including possibly microphones. Additionally, Borelli said there is internal planning going on with regard to a virtual Green and Gold Gala.

According to Borelli, participation in Friends of Lane meetings has “exploded” since the meetings became virtual. She cited a recent virtual comedy night that over 200 people attended. She added that the organization’s next big fundraising idea is a concert featuring Lane music teachers.

Borelli talked about the virtual holiday appreciation for staff. She said donations were three times higher than previous years, all from parents and community members. All Lane staff members were given a $50 gift card.

Borelli closed out the report by saying that Friends of Lane is there to support graduation preparations.

Alumni Association president Michelle Weiner was not at yesterday’s meeting, so there was no report this month.

The LSC unanimously approved two checks: one to purchase $73,600 worth of Jostens yearbooks that students ordered at Quick Start, and a second payment of roughly $14,550 for HUDL Agile Sports Technologies, which will allow sports teams and the drama and music departments to film and critique their students. According to Lane Athletic Director Nicholas LoGalbo, this software will allow teachers to provide better instructional feedback to their actors, players and musicians.

There were no fundraiser approvals necessary at this LSC meeting.

According to Haite, LSCs typically have to approve all checks for amounts over $2,000. At a school of Lane’s size, this would mean that almost every check would need LSC approval. As such, at the beginning of every two-year LSC cycle, the council moves to raise the check approval amount to over $9,999. The motion passed unanimously.

CPS Back to school

There were three big takeaways from the reopening portion of Thursday’s LSC meeting.

(1) The LSC will write a letter to the CPS Board of Education addressing concerns about how the Lane cluster program has reopened for in-person instruction. According to LSC Chairperson Emily Haite, who said she heard from parents and teachers of students in the cluster program, special education teachers had to buy some of their own personal protective equipment (PPE); some students are unable to wear masks and paraprofessionals; and teachers and special education classroom assistants (SECAs) often cannot keep six feet distance because they have to physically care for their students. Another LSC member said that cluster teachers have reported mouse excrement in their classrooms and dust on the tables, indicating poor cleaning. According to Haite, there have been at least two positive cases of COVID-19 in the Lane cluster program.

(2) The LSC will by Jan. 29 send a survey to parents and students to gauge those groups’ opinions about in-person instruction for high schools. This comes after about 20 public participants, primarily teachers, voiced their concerns with in-person learning and urged the LSC to join other high schools in passing a resolution against a high school return to in-person learning. The LSC’s parent representatives expressed their reluctance to support such a resolution without having heard from their constituents. Parent Representative Patricia O’Keefe added that because of differences in home environments and access to proper nutrition, learning at home can also be inequitable. She reiterated the need to learn more from CPS.

(3) The LSC will hold a special meeting on Feb. 9 at 6:30 p.m. to decide whether to pass a resolution against in-person instruction for high schools. According to LSC members, this will give them the time to analyze survey responses and act in accordance with the constituents’ wishes, as well as glean a better view of how CPS will handle high school reopening.

Haite also recounted that there were 22 public participants, 20 of whom were in favor of staying remote. Twelve of those 20 specifically asked the LSC to pass a resolution against in-person classes for high schools.

Teachers have high risk family members and are wary to put them in danger.
Large numbers of students take public transportation and will likely spread COVID-19 to their respective neighborhoods.
Social distancing at Lane is not realistic because there are too many students, and these students would likely socialize before and after school.
Teachers don’t believe that simultaneous hybrid teaching would work.
Teachers don’t believe that CPS will deliver on logistical promises regarding PPE, room cleaning, etc.
Teachers ask, “Why go back without a vaccine when vaccines are so close?”
Teachers ask, “Why add additional risk to anyone’s life when it’s not necessary?”

Law concluded by recalling how a student of his was on a Meet call with Law when she learned that her grandfather contracted COVID-19. Within 48 hours, Law said, the student’s grandfather passed away.

Law added, “I don’t want to attend my students’ funerals.”

Chairperson Haite put a motion on the table to approve a letter in support of dedicating the field within Lane Stadium to honor Lane alum Fritz Pollard. The letter will be sent to CPS, the Board of Education and 47th Ward Ald. Matt Martin. The motion was unanimously approved. The Lane Tech Alumni Association will assume administrative functions and oversee the entire process.

All positions will be held by their incumbents. Haite will remain chairperson, Borja-Scales will continue serving as secretary, Parent Representative Laura Symons is set to remain vice-chair, and Lokken will stay on as Freedom of Information Act/Opening Meetings Act Officer.

Prior to the vote, Parent Representative Patricia O’Keefe called for more strict agendas this upcoming term, such as acknowledging what items are being voted on and what is just for discussion.

Haite said that this can be difficult because there are often last minute changes, but she will try to improve the agendas.

The LSC announced that meetings will continue to be scheduled for the third Thursdays of the month, with the exception of a June 3 meeting, at 6:30 p.m.

Notably, the LSC allowed only one hour of public participation for the special meetings regarding the school symbol and school resource officers this summer.

Following the conclusion of the organizational meeting, the actual LSC meeting started immediately.