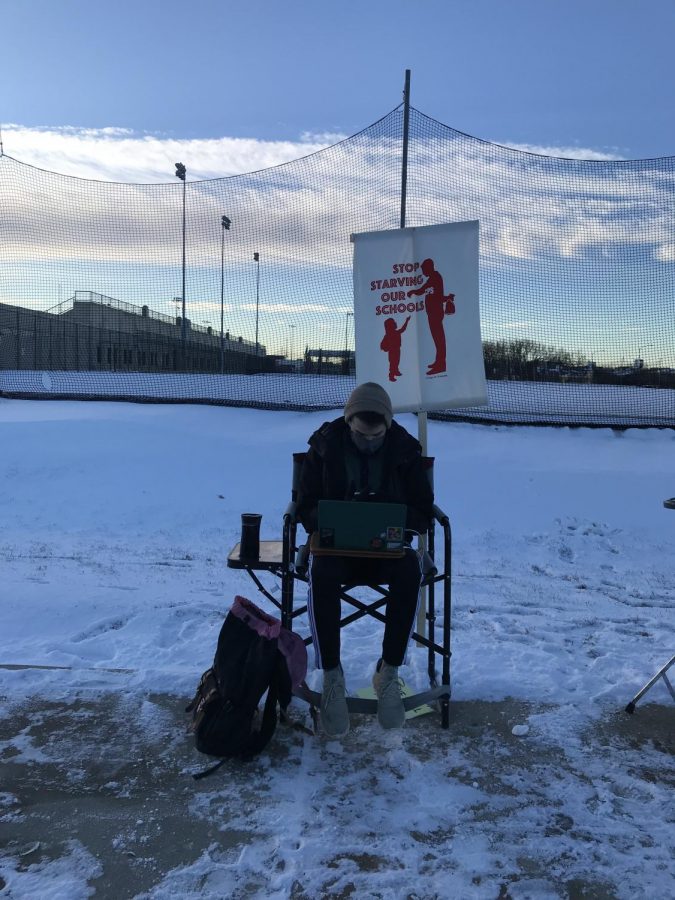 Music Teacher Sam Veren teaches his classes on the sidewalk along Addison St. during the Jan. 21 teach-out.

By Finley Williams and Aidan Sadovi

A group of about 20 Lane teachers joined CPS teachers across the city in trading their swivel chairs and desks for parkas and folding chairs for a less than ordinary day of education on Thursday morning, Jan. 21.

These “teach-outs,” organized by the Chicago Teachers Union (CTU) rank-and-file, had teachers leading their virtual classes outside of their schools to show solidarity with the roughly 90 special education teachers that CPS locked out of Google Classroom for not attending their in-person classes. The protest also served as a rebuke of CPS reopening plans, which the CTU has decried as unsafe.

Lane English teacher Dane Haiken described the demonstration as a way to “raise awareness, and to communicate to everyone that other teachers and students are next in being forced to go back into the buildings when clearly, the conditions are not safe.”

This action came just a day after the CTU House of Delegates voted to continue remote work on Jan. 25, the day K-8 teachers are slated to return to in-person classes. Rank-and-file members will have until Saturday night to vote on the measure. If approved by the majority of those members, thousands of K-8 teachers would refuse to report to schools, and if CPS prohibited those teachers from accessing their CPS accounts, the union may pursue a work stoppage.

According to Lane CTU delegate and English teacher Curt Maslanka, if CPS locks teachers out of virtual classrooms, the House of Delegates will likely convene to set a strike date. It is currently unclear whether CPS will lock those staff members out of their accounts, and for what day the House of Delegates might plan a strike. Maslanka added that if K-8 teachers strike, high school teachers would strike with them.

CPS has said that Monday’s refusal to report in-person would constitute an illegal strike, though the CTU has avoided labeling the action as such, as teachers will continue working remotely if they are able.

CPS also remains adamant that its special education, pre-K and K-8 reopening plans provide the infrastructure necessary for a safe start. These reopening plans were augmented Friday afternoon, as it was revealed CPS teachers would begin receiving the vaccine in mid-February, as part of phase 1B of Illinois’ vaccination plan.

Vaccination was one of the union’s conditions for returning in person, but educators like Lane Spanish teacher Celeste Ramovic remain steadfast in the idea that there must be mass vaccination throughout Chicago before it is safe to return to school.

“I don’t think think this will be safe until mass vaccination happens … so that there are not only safe working conditions for workers, but so that students aren’t susceptible to modes of transmission — so that they’re not bringing them into their households, their communities, intergenerational communities,” Ramovic said.

According to CPS, the plan includes a requirement for masks to be worn at all times by those above the age of two, “handwashing and sanitizing protocols,” increased cleaning, and “on-site care rooms” for students who fall ill at school. A symptom and risk screener assessment, like the one required for those who currently enter Lane, is also supposed to be utilized.

There are significant growing pains with this current phase of reopening according to some, however.

At yesterday’s Lane Local School Council (LSC meeting), LSC Chairperson Emily Haite said that she received reports from teachers in the Lane cluster program that “special education teachers had to buy some of their own personal protective equipment (PPE); some students are unable to wear masks and paraprofessionals; and teachers and special education classroom assistants (SECAs) often cannot keep six feet distance because they have to physically care for their students,” according to The Warrior.

Teacher Representative Daniel Law added that some teachers in the cluster program have found mouse excrement in their classrooms, as well as dust on the tables, which indicates inadequate cleaning. The Lane cluster program has also reported two positive cases of COVID-19, according to Haite.

As for whether the union should move forward with what would effectively be a strike, responses among the educators in line varied. However, all acknowledged how gloomy they found the proposition of not teaching.

Lane science teacher Elizabeth Lee said she would support any decision the union came to, including a strike, but admitted it was a less than desirable option.

“I don’t know a single person who wants to strike,” she said. “However, if we need to go that route for CPS to listen to reason, and to care about every student and staff member in CPS, then, unfortunately, we’ll have to do that.”

As the line continued to grow steadily in the frigid morning, Lee emphasized the significance, and history, she felt this group of teachers had behind them.

“If I had time to talk about the history of unions and their significance, we could talk about that even more,” Lee said. “Collective action works.”