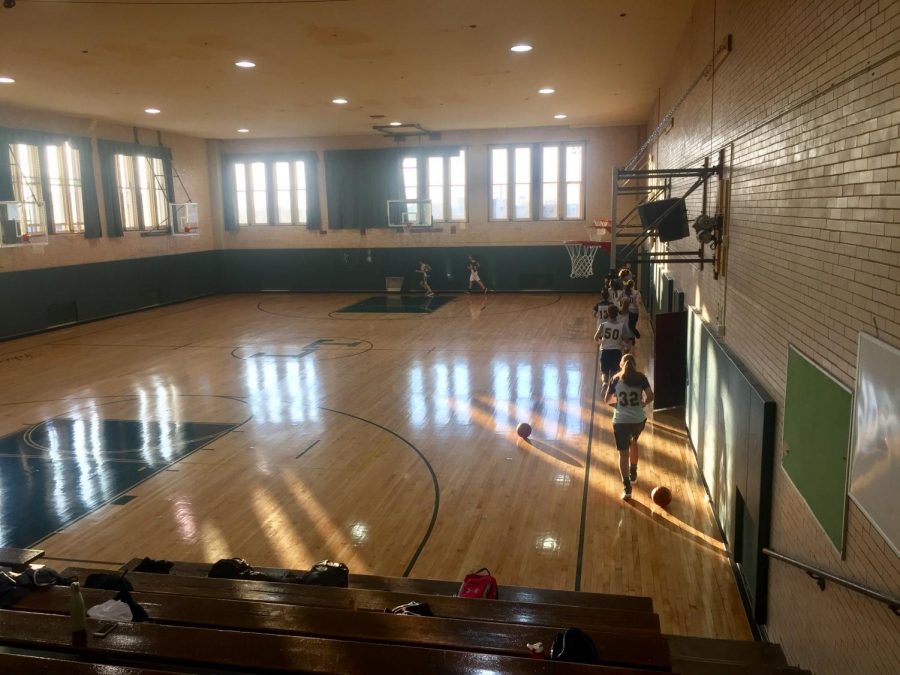 The Lane Tech basketball teams are hoping to return to the court soon, but they first need CPS approval and COVID-19 numbers to slow down. (File photo)

The new plan, which was agreed upon at Wednesday’s IHSA Board of Directors meeting, allows for every sport to be played this school year, if regions meet certain COVID-19 benchmarks.

Chicago, for example, will need to move up one level, from Tier 1 to Phase 4, for higher-risk sports, like basketball and football, to be played.

For Lane in particular, CPS will have final say over whether athletics can begin.

This may cause a pickle for basketball. Basketball, a higher-risk sport per the Illinois Department of Health, can begin immediately and can play through March 13. But teams must have seven practices before games, and even though teams can have full practices in Tier 1, CPS has yet to give the go-ahead.

Despite this, The Sun-Times’s Michael O’Brien reported that IHSA’s executive director Craig Anderson said, “There could be some issues with regions being able to play certain sports. That is something we will have to consider if they couldn’t play during our timeline.” This possibly could lead to Chicago playing a later basketball season, if they don’t get into Phase 4 soon enough.

Reaction to the basketball schedule was mixed.

“Earlier in the week when I heard that there was a possibility that basketball would be back I started envisioning myself back on the court at Lane,” Lane boys basketball player Aaron McQueen, Div. 159, told The Warrior via direct message.

“After today’s news I was happy to see that basketball is back but it was disappointing to learn that some schools in Illinois will have basketball while others will not,” McQueen continued. “I believe the return of basketball or any other sport for that matter, should only be made when all schools can participate. … I can’t wait to be able to play my senior year and to be on the court with my teammates. I know me, my brother and my teammates have been working very hard for this season and are excited to be able to have an opportunity to play this year.”

On the girls side, senior Molly Joseph, Div. 179, is less optimistic.

“Honestly I am indifferent about the decision because I want them to do what is best for public health. If they believe that it is OK to start sports again then I trust them,” Joseph told The Warrior via direct message. “However, as we all know it will still be district by district and I think there is a low chance of CPS allowing basketball to start. I am happy that other teams will hopefully have the opportunity to play even if I won’t.”

“The IHSA calendar announcement is a step in the right direction; I am keeping my fingers crossed for summer basketball,” Molloy told The Warrior via email.

Dance, cheerleading, boys swimming and diving and boys and girls bowling all can play from now until March 13. These sports are lower risk and can begin play after seven practices, though CPS has yet to give approval. Cheerleading and dance will have a virtual state series, but none of the other sports, including basketball will have one.

While some fall sports (cross country, golf, girls tennis and girls swimming and diving) were able to play their season during the actual fall, perhaps the biggest fall sport, football, is set to begin March 3, with the first games allowed on March 19. If Chicago is in Phase 4 and CPS gives approval by then, football will be good to go at Lane.

“I actually found out about the IHSA schedule through some teammates and I was really excited that the state’s giving us a chance to play some football this year,” Daehyun Kim, Div. 279, a player on the football team, told The Warrior via direct message. “I’m just hoping CPS pulls through. I know there’s bigger issues at hand but to some of us, it’s more than just a game.”

Nasir Latham, Div. 170, a senior who already has a football offer from Augustana College, was also pleased by Wednesday’s news.

“I think the IHSA pushing for high school sports has been an extensive, grueling process — Constantly living in the unknown, not knowing when or what’s going to happen,” Latham told The Warrior via direct message. “I think the decision for today regarding our seasons in the spring is gonna open up a lot of opportunities for the players, especially those looking to play their sport at the next level. I’m happy to be able to get back to work and share another experience with my teammates.”

Football is set to go through April 24 with no state series. Boys soccer, girls volleyball and water polo, all moderate-risk sports, are set to start March 1, March 8 and March 15 respectively and go through April 17, April 24 and May 29. Water polo may have a state series, while soccer and volleyball won’t. All of those teams must have seven practices before starting.

This all leads to the late spring/summer season, featuring baseball (lower risk), lacrosse (higher), girls soccer (moderate), softball (lower), boys tennis (lower), track and field (lower) and boys volleyball (moderate). These sports all go from April 5 to June 19 and require seven practices before games. It is yet to be determined whether there will be a season for these sports.

Wrestling (higher risk) has a slightly shorter season, going from April 19 to June 12, while still requiring seven practices prior to competition and having no state series.

“I’m happy that the IHSA was able to develop a schedule that gives all of our student-athletes in the state a chance to play their respective seasons,” boys baseball coach Sean Freeman told The Warrior via email. “It was without a doubt a very challenging task and I give them credit for what they were able to do.

“I’m thankful they took into consideration that spring sports missed all of last year and that there is a possibility of a post-season tournament for those sports,” Freeman continued. “Our 2021 seniors deserve that opportunity after all that they [have] been through. We are looking forward to having a safe and successful season, and can’t wait to get back to competing.“

“Everyone must also understand that all of IHSA’s plans are still dependent on district acceptance and implementation,” the message said. “Our district, CPS, must get clearance and implement our return to play protocols. AT THIS POINT, CPS HAS NOT GIVEN US PERMISSION TO BEGIN. ONCE WE RECEIVE COMMUNICATION FROM CPS, WE WILL UPDATE EVERYONE.

“At the school level, we are putting in all necessary permits and communicating with school staff (security, maintenance, building operations, etc.) about sports resuming once we have approval from CPS, but again, as of today, there is no official start date,” the message from LoGalbo continued. “Once we receive communication for clearance to begin we will lay out the plan for the season to resume for the winter sports that began in November and the tryout schedules for boys and girls basketball in an email to coaches, on our website and in student news.”