Back at last: Lane athletics prepare to return after CPS gives go-ahead for winter sports 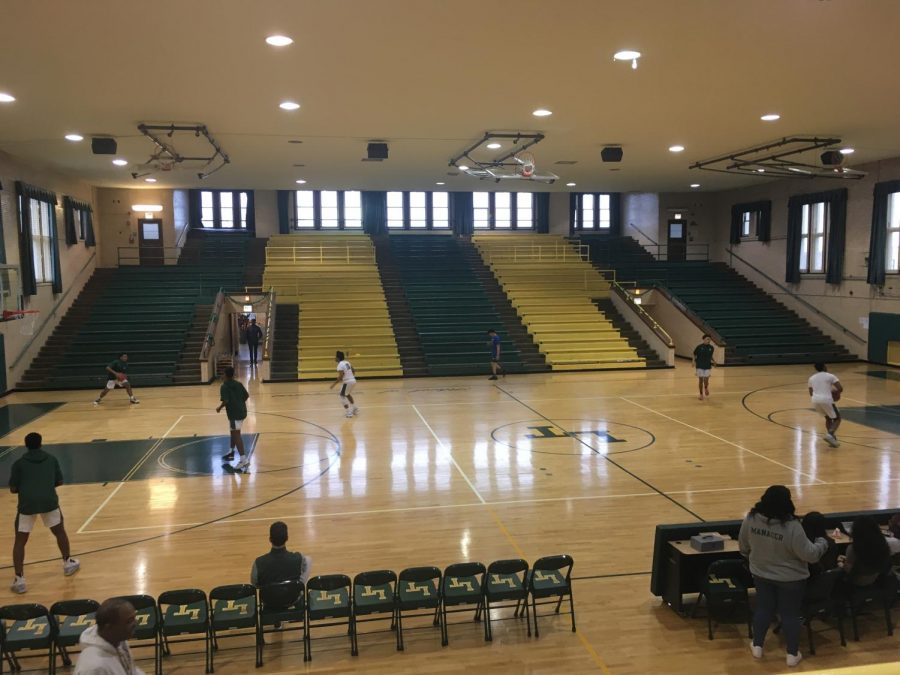 Following Tuesday's announcement, basketball will return to Lane's gymnasiums, starting with tryouts and practices, and then spectator-less games. (File photo)

After months of waiting, CPS winter athletes and coaches finally received some good news on Tuesday — sports are back.

Basketball, bowling, badminton, cheerleading, dance and boys swimming and diving all were allowed to start their seasons yesterday, a sudden start for athletes who earlier this week didn’t even know if there would be a season.

CPS athletes were left in the dust after Illinois High School Association’s (IHSA) recent schedule announcement. While most of the rest of the state has started to play in the past two weeks, CPS students heard nothing until Tuesday.

According to the Feb. 10 Student News email, the first day back for Lane athletics is today.

IHSA guidelines require all of these sports to have seven practices before taking part in a game or competition, meaning it will likely be another week until any official competition starts.

All of these sports can play until March 20, with the exception of badminton, which can go until April 3. CPS was given an extra week to play at IHSA’s February board meeting because of the district’s delayed start.

CPS teams will only be allowed to play other schools in Chicago’s Illinois Department of Public Health (IDPH) region, as well as other schools up to 30 miles away, even if it’s outside of the region.

Even with the shock of a quick turnaround, and no spectators allowed at any events (up to 50 spectators are allowed by IDPH in Phase 4, but CPS is not allowing any) many athletes are just happy to be able to play. Here is what the reaction to the return has been, as well as what CPS guidelines are for each sport:

Of all the sports returning, basketball is the only one labeled “high risk” by the IDPH. Despite this, excitement lingers in the air for a return to Lane’s gymnasiums.

“I was very happy to see that we will be playing basketball,” basketball player Aaron McQueen, Div. 159, told The Warrior via direct message. “I can’t wait to be on the court with my teammates. I have been working very hard for this moment and I know my teammates have all been working hard as well.”

Nicholas LoGalbo, who serves as both the school’s athletic director and boys basketball head coach, had a similar level of excitement.

The anticipation holds true for the girls team, as well.

“Honestly I don’t really have much to say besides that I am excited that CPS is giving basketball the chance to have a season, even if it is shorter than normal, and I can’t wait to be back on the court with my team,” basketball player Molly Joseph, Div. 179, told The Warrior via direct message.

While basketball usually draws some of the biggest high school sports crowds, this year the number of fans will be reduced to zero. There will be up to fifty people allowed in the gym allowed, including players, coaches and referees, according to the CPS COVID-19 basketball guidelines.

The only Lane sport that won’t be taking place inside of Lane’s building is bowling. The boys and girls team will be competing as they usually do at Waveland Bowl.

Bowling is already a non-contact sport, but there still will be changes to help prevent COVID-19. The balls will be cleaned, most equipment won’t be shared, and masks will be required, making the season different from past years.

Boys bowling head coach Kaitlyn Jensen recognizes these changes, but is still excited for her team to return to the bowling alley.

“Although this season will look very different from seasons in the past, I know myself and my athletes are excited to compete and resume where we left off,” Jensen told The Warrior via email. “While it is unfortunate, but understood, that state level competitions and tournaments will not take place, we are hopeful that we will take the city title instead!”

Girls bowling coach David Ruge is also ready for the return to play.

“I am so excited that Lane Tech girls bowling is going to get an opportunity to play this season,” Ruge told The Warrior via email. “Even if it is nothing like we have experienced before, at least we get the chance to go out there and compete and play the game we all enjoy so much!”

Up to 50 people or 25% of the bowling alley capacity, whichever is lower, are allowed in the bowling alleys at any time, according to the 2020-2021 Chicago Public League Bowling Guidelines.

CPS guidelines for cheerleading and dance establish that no physical contact may be made between cheerleaders and dancers while practicing or competing. Even with this change, the season will go on. Cheer and dance are the only two sports returning that will for sure have a state series this year, though those will be held virtually.

These state series are supposed to start Feb. 27 for dance and March 6 for cheerleading, meaning it will be a quick transition from tryouts to important competitions, something that concerns cheerleading head coach Maureen Murphy.

“Our sport, as well as dance, will have a state series this year so if we want to compete we would need to have tryouts early next week — seems really rushed to be ready to compete in two weeks,“ Murphy told The Warrior via email.

Murphy said that today she was having a virtual meeting with her returning cheerleaders to “discuss options and their feelings regarding safety.”

One of these returners, Tia Pepper, Div. 177, says the team is ready to resume practice.

“Our team is super excited about the recent news regarding the recent approval of sports by CPS,” Pepper told The Warrior via direct message. “We are not sure what our season will look like but we are happy we will be able to have one even if it looks different this year.”

Swimming and diving is the only sport that actually has some experience with carrying out a high school season during the pandemic. The girls swimming and diving team had their season in the fall, winning city and placing second at sectionals, with only one known positive test.

Swimming is the only sport that does not require masks because of its being played in water.

For practice, each lane will only be able to have four swimmers, and for competition, no pool smaller than “25 yards or 25 meters” will be allowed to host, according to the 2020-21 Boys Swimming & Diving COVID-19 Guidelines. Relays will be allowed for the boys season, while the girls were not allowed to in the fall.

Like bowling, there can only be 50 people or 25% of the pool capacity, whichever is lower, at the pool, and no spectators allowed.

Lane does not have a badminton team. However, the schools that do have badminton teams will have strict guidelines like all of the other sports. In addition to general guidelines, such as no spectators and no locker room access, doubles will not take place this year. Up to six additional singles matches may take place because of this.