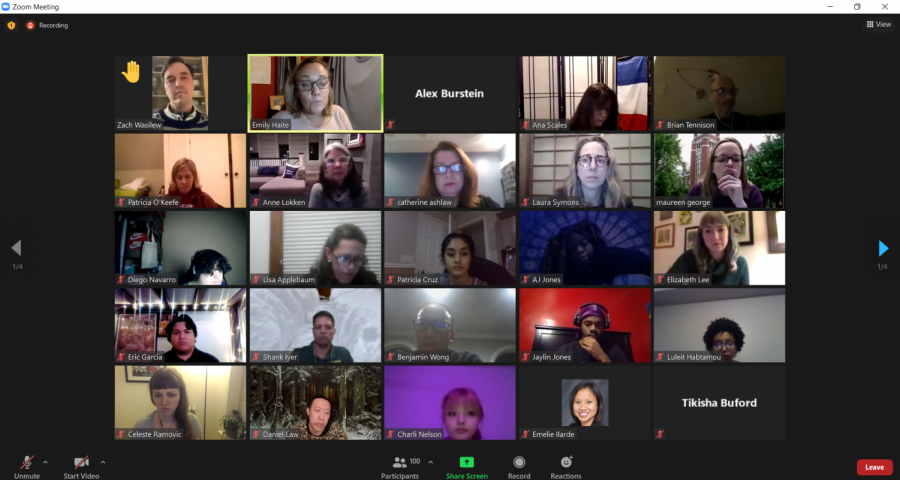 A screenshot from the Feb. 18 LSC meeting. More than thirty students spoke during Public Participation.

By Alex Burstein and Ella Rappel

Thursday’s LSC meeting began with over 90 minutes of Public Participation. With 46 public participants, a clear picture emerged: the students, or at least those attending this Feb. 18 meeting, do not want a return to in-person learning at this moment, with the COVID-19 pandemic still very much alive in Chicago, even with declining numbers.

“Are we considering the students?” Connor Green, a student, asked during Public Participation.

“You all put out that poll recently that was asking parents how they felt about returning to school,” Green continued. “Was there ever a poll that considered teachers’ or students’ opinions on this matter at all? Because at the end of the day, we are the backbone, and we are the meat and potatoes of what is actually going to go back to the schools.”

Some students, like Green, feel they have largely been left out of conversations surrounding a return to school.

So, Thursday evening, students brought up point after point against a return to school, a stark contrast to last week’s special LSC meeting regarding reopening, where the number of speakers from both sides of the issue was split more evenly.

After the increase in student participation, the LSC unanimously voted at the end of the meeting to send out a survey to students regarding reopening opinions.

Both teachers and parents have already been surveyed. Teachers were against a return to school right now. Conversely, 62.2% of parents who responded to the survey were in support of a return to in-person instruction. However, concerns were raised at the LSC special meeting last week about a lack of diversity in the parent survey. There were 1,075 responses, and of the 847 parents who disclosed their ethnicity, Hispanic and Black parents made up 15.5% and 2.6% of respondents, respectively, while they make up 39% and 7.5% of the school.

The students, though, used Thursday’s Public Participation to voice their opinions.

Jonah Bahr, a student who spoke at the meeting, was not buying the argument made by some parents that a return to school will help improve the mental health problems many students are having.

“I find it wholly ironic that the people that want to bring up mental health now haven’t actually made any legitimate strides in propping up Lane’s mental health infrastructure,” Bahr said during Public Participation.

Like Bahr, many students said that a return to school won’t necessarily help student mental health, especially if the return isn’t safe.

Pamela DiCarlantonio, a parent, told students at the meeting to think about which students were expressing their opinions and which weren’t.

“The kids who are grappling with mental health issues, even though you maybe don’t even realize they are, they’re not gonna be the kids who come up here and speak their minds,” DiCarlantonio said during Public Participation.

This comment did not go over well with multiple students, many of whom brought up their own mental health concerns.

Maya Asfaw, who referenced the comment from DiCarlantonio, said that she doesn’t think mental health will necessarily be taken care of when students return to school.

“It’s a lot easier to use mental health as a talking point to get students to go back to school than it is to actually care about students once they are there,” Asfaw said.

Multiple students also brought up the inequity of a return, citing worse COVID numbers in primarily POC neighborhoods, and because of that certain students won’t really have the option to return.

Green said that not all students are being considered in the reopening process.

“At the end of the day, who will most likely opt to stay home? BIPOC students,” Green said. “Why are we disregarding BIPOC students’ opinions here?”

Unique Mackey, a student, said that transportation is going to create inequity if schools were to return now, with the CTA not necessarily being a safe option for some students.

“I spend about 4-6 hours traveling a day to get to and from school, and I know hundreds of BIPOC who do the same thing for reasons we’re not discussing in this meeting,” Mackey said.

Abigail Islas, a minority student who takes two buses to school, said that everyone is not on an even playing field.

“The risks aren’t the same for everyone, and I just find it inconsiderate of some people to put everyone on the same playing field because not everyone has the same advantages as others,” Islas said.

Students also advocated against the return to school by holding up signs and changing their screen names during the meet, urging LSC members to send out a student poll and listen to students.

The final conversation of the night centered on potential action over the high school reopening situation.

The LSC has been talking for months now about sending a letter to CPS either in favor or against a return to school.

Despite extensive discussion of the matter, the LSC remains divided in their opinions on a return to the classroom.

Teacher representatives voiced their concerns regarding hybrid and in-person learning plans, stating that they are adamantly against a return to school this year.

“We believe that hybrid and in-person learning… for the remainder of this academic year is not appropriate. It’s inequitable, it’s dangerous, there’s no reason for it,” said Teacher Representative Katharine Gomez.

“I think what the students want is to invest in remote learning now because we know that that’s at least safer,” Garcia said.

“In a pandemic, we need to listen to epidemiologists, infectious disease doctors, we need to follow the guidance of the CDC, the Chicago Public Health; they’ve all stated it is safe to go back,” said Maureen George, a Community Representative.

Benjamin Wong, a Parent Representative, agreed that schools can reopen safely by adhering to CDC guidelines, adding that “parochial and suburban schools have been open since last August with limited infection outbreaks.”

However, reopening data from parochial and suburban schools may not be indicative of reopening capabilities at Lane, according to LSC Chairperson Emily Haite.

“I think the issue that we have with Lane Tech is what many of the students were saying today, [that] parochial schools, suburban schools, they… don’t have to deal with students coming from all ends of the city,” Haite said.

“There’s just no way to go back to school in a hybrid fashion in an equitable way for Lane,” Haite continued.

In advocating for an option to return to school, Patricia O’Keefe, a parent representative, emphasized the ability of students to choose whether or not they return.

Gomez pushed back on the idea that everybody has a choice, revisiting the story of student Kendra Byrd, who discussed in Public Participation the high risk of infection she would face as a student who takes three modes of public transportation to get to Lane. Many students shared similar stories, raising concerns about the dangers faced by students with longer commutes.

Gomez echoed these concerns in her rebuttal of O’Keefe’s statement.

“I don’t think that it is a choice for a lot of students because some students don’t have that choice in a safe way,” Gomez argued.

The majority stance of the LSC on a return to in-person learning remains unclear.

The issue will be discussed further at the next LSC meeting on March 18.

The LSC discussed two different letters during this meeting, the first of which is a letter to CPS and Mayor Lori Lightfoot requesting COVID-19 resources, such as vaccine priority for teachers and better contract tracing, for Lane’s cluster program. The cluster program letter was approved by the LSC but has yet to be sent.

As of now, the LSC’s draft letter requests that CPS allow “Principal Tennison or multiple stakeholders from Lane Tech be part of the task force regarding the reopening of [CPS] high school[s].” This letter is currently being drafted, but no vote has been taken on sending it yet.

Principal Brian Tennison reiterated that he would follow any directives given by the district, but said that transportation is a real problem and that he had similar questions about how lunch would work with a return to school.