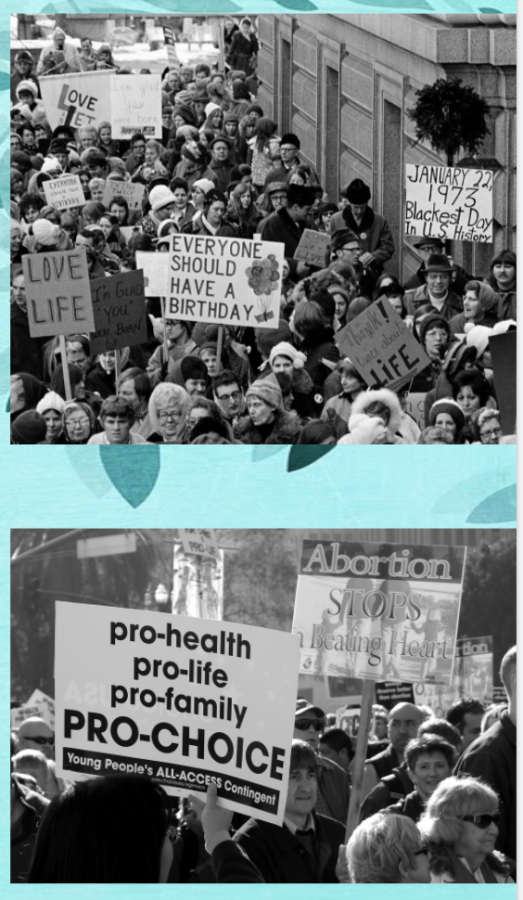 A slide from a Civics discussion on the pro-life and pro-choice movements in the United states. (Photo courtesy of Marrin Gillespie)

As former op-ed contributor Ewelina Novak wrote in the December 2015 edition of The Warrior, Civics is no longer a blow-off class. The old curriculum was replaced by a broad study of US government, history and activism. Civics, like students’ civic participation, has evolved.

However, Civics was not always this way. In 2015, Gov. Rauner signed a bill mandating Civics be a statewide graduation requirement. So, Lane decided to revamp its program to fit within the new statewide requirements.

“[Civics] wasn’t a real government class; it didn’t really address historical topics. It was more like it was a class for seniors to take and kind of engage with the staff and kind of do tasks around the building to be an aide essentially,” said Marrin Gillespie, a Civics teacher and Lane alum.

“So there’s the state requirements, the first one, the Public Law test, which the Constitution test is the same thing, the other one would be the service learning project, and then the last one is financial literacy, which all three of those actually count as Lane graduation requirements,” Gillespie said.

Public law is about the functions and processes of the government which culminates with the Public Law test, similar to the Constitution test many students take in 7th or 8th grade.

“It’s testing whether or not students have gotten to learn the ability of how to apply their Bill of Rights, or kind of just the big ideas of the Constitution,” Gillespie said.

The financial literacy piece is a graduation requirement on its own. According to Gillespie, its focus is on students’ financial life after school, giving them the skills needed to manage their money.

“Financial lit, which is really just determining whether or not students can build an understanding of how to be aware of credits, savings, checkings, the basic needs of what you need to do for like a W2 and to fill out your taxes,” Gillespie said.

The service learning piece is a project where students work to make an impact in their community according to Gillespie. The project brings the governmental study together with the focus on social movements to accomplish real good.

“We want to make sure kids are interacting with the community and trying to figure out a civic-minded project and how to make an impact,” Gillespie said.

Civics is about much more than just learning the mundane workings of the U.S. government, according to Civics teacher Joy Scott.

“The idea is that pulling in social movements, as a basis of our curriculum, really allows more diversity, within the curriculum, of ideas,” Scott said.

The curriculum aims to give students the tools to form an understanding of their own, according to Gillespie.

“They’re having the tools to pick apart our history, and kind of make their own opinions afterwards,” Gillespie said

According to Gillespie, the Civics course wants students to understand the power of people.

“At the end of the day, what kind of power does the average person hold?” Gillespie said.

Given the focus on past social movements, those of the current day have a large focus as well. Whether it’s BLM or others there is a focus on the here and now. After the traumatic events of Jan. 6, Civics was a place for discussion and understanding.

“I think it’s important to first acknowledge what is happening in Chicago, what was happening nationally, and then make a space for all of us and just be able to debrief and ask questions about the situations that we are watching on the news, and also have strong analysis of the situations,” Scott said.

Given the pandemic and political unrest, Maureen Bradish, a civics teacher, endeavors to bring a positive perspective to her students.

“I’m always trying to focus more on something positive for them to look at rather than, you know, this is a really gloomy situation we’re in right now. So how can we make it better?” Bradish said.

In the end, connecting government to ourselves is what Civics is all about.

“What does it mean to you personally? How does it affect you in your daily life personally? That is the major focus.” Scott said.