A look back at a brief moment in a memorable struggle: The Lane teach-out 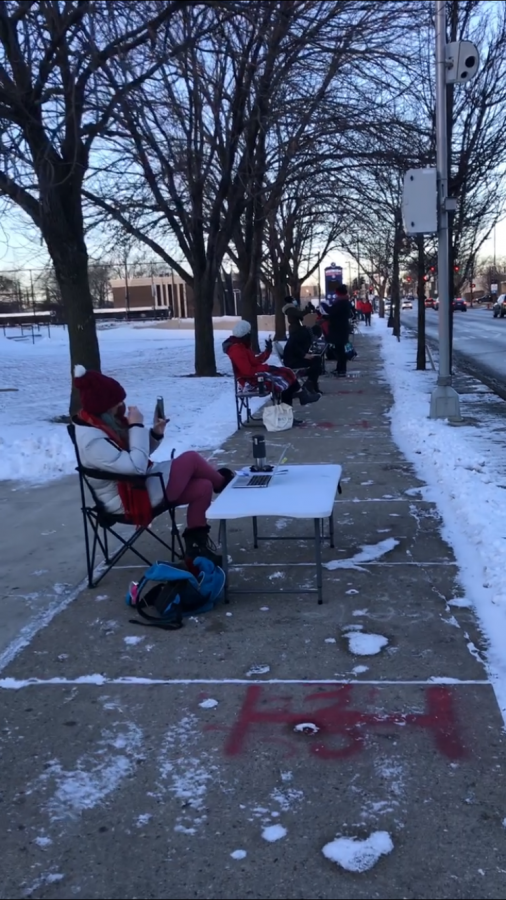 Lane teachers, as a rebuke of CPS’ reopening plans, conducted their classes on Jan. 21 in the frigid cold, forming a line up and down Addison.

By Aidan Sadovi and Finley Williams

As the already tenuous relationship between the Chicago Teachers Union (CTU) and CPS grew frostier in late January, teachers moved their virtual classrooms outside as a unique form of protest against CPS reopening plans. The “teach-outs,” as they were called, were some of the most memorable moments of a reopening tussle that captivated local and national attention alike.

The Champion thought it fitting to take a look back at these working-protests, a unique point in the complicated history between CTU and CPS.

On Jan. 21, Lane teachers dotted a sedentary protest line on Addison and Rockwell just outside of the Lane building and adjacent to the stadium. English, science, math, music and other teachers led their usual classes directly facing the usual onslaught of morning traffic.

Like many others there, Lane teacher Dane Haiken was adamant that this scene was not only an educational protest, but an act of solidarity with his colleagues who were going to be forced to return early to in-person learning. K-8 had been told by CPS to return to in-person learning the following Monday, and CPS threatened to lock teachers out of their virtual education Google Classroom accounts as punishment if they did not comply. Teachers and students in the special education programs of many schools had already returned to buildings.

“[We’re doing this] to raise awareness and to communicate to everyone that other teachers and students are next in being forced to go back into the buildings when clearly the conditions are not safe,” Haiken said.

The teachers who heard the comments paid them no mind.