We are living in the misinformation age, and only we can change it 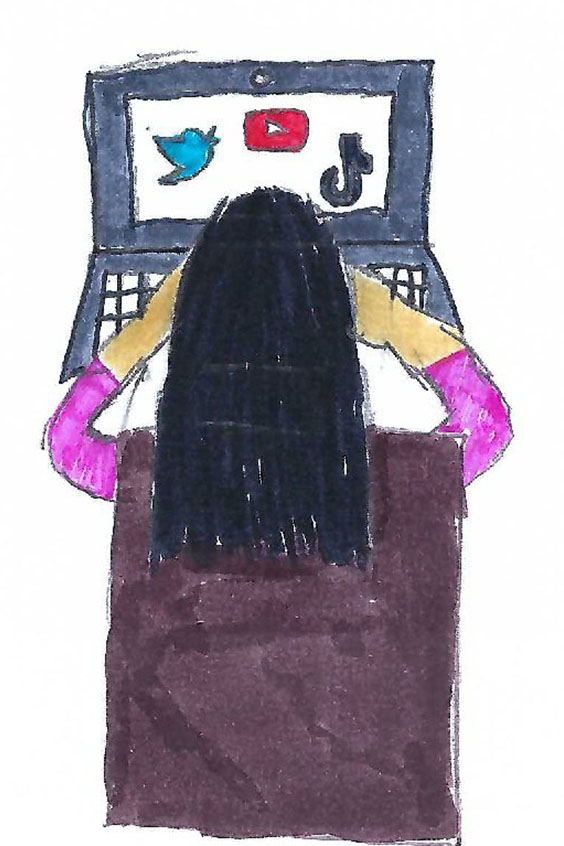 I distinctly remember falling into a YouTube recommendation algorithm trap during freshman year when I became very curious about politics and learning about views opposite of mine.

I started watching Steven Crowder’s “Change My Mind” series. Crowder was (and still is) very obviously conservative and never tried to be unbiased in any way. In his “Change My Mind” series he would plant a table in a public area with a sign that said something like “white privilege is a myth, change my mind.” I almost always disagreed with whatever statement he was arguing in any given video but by the end I would usually come closer to agreeing with him.

Normally, it’s great to seek out content that disagrees with your original stance on an issue or opinion, but the problem with Steven Crowder was that he gave himself much more of an advantage during his debates with strangers. He was obviously much more prepared than a random average person that he would debate because he came in knowing and preparing for a debate whereas the people he would debate would have no idea.  He would often plant his table on college campuses and target college students who were younger and less educated than him.  He was also able to edit his own videos and would clearly cut out any part where his opponent made a good point against him or he lost.

This made it very easy to make it seem like his points were always right and irrefutable, which is an extremely dangerous portrayal of ideas, especially since he would often cherrypick stats or quote incorrect information. This is especially dangerous for younger people, who may be unaware of his tactics.

Steven Crowder’s videos are just one of countless examples of modern misinformation, which is spreading at an alarming rate due to the internet and the algorithms that sites like YouTube use to recommend users similar videos. I was eventually able to make my way out of the right wing biased media phase but many people, especially young people, do not.

Now that the internet has been around for a while and has developed at a rapid pace, easy access to the internet has actually become harmful in many ways as we now shift to what some people like to call “The Misinformation Age.”

Misinformation has been rampant during the Trump presidency, but has existed long before the internet. Throughout history, misinformation would spread through cults and secret organizations, but now it spreads through more mainstream news outlets and social media sites.

One of the most recent examples of modern misinformation spreading and affecting the real world came on Jan. 6. It was abundantly clear after the 2020 presidential election and the Capitol riot that misinformation and fake news were at the forefront of the movement of Trump supporters and even Trump himself claiming election fraud after he was not reelected. Although Election “Night” was much longer than usual, after all the votes were counted and reviewed, it was clear that Biden had won. But still, millions of Trump loyalists believe that Trump had somehow won the election, all the way up until now, even after Biden has been inaugurated.

It’s not like this was some sort of hidden sect of people with a secret ring of misinformation either. Because the misinformation was spread by former President Trump himself, it was set at the forefront of major news outlets and social media networks like Twitter.

The internet makes many more people much more susceptible to confirmation bias. Sites like Tiktok and YouTube are especially dangerous places to fall into a confirmation bias trap, since they both have algorithms that suggest videos according to the viewers activity on their site.

Anyone who uses TikTok knows the effects of the vigorous algorithm the site uses to create its “For You Page.” The For You Page is essentially just an endless scrolling loop of videos that are recommended to its users by TikTok based on their activity on the site.

This quick-thinking and ever-learning algorithm can be extremely dangerous to young people and those who are not conscious of it. It can cause young people to move towards very extreme and sometimes even harmful views or beliefs, without even being aware of what’s happening to them or why.

It’s important that we as young people understand how to use social media and the internet in order to prevent ourselves from continuing to fall into these “recommended” and “For You Page” traps. That being said, I fear that these systems are already deeply ingrained into our minds and into our society, so it will be a long journey to overcome it. But it starts with us.

We as a country have already seen the effects misinformation and social media polarization have in the real world. In order to overcome the spread of misinformation and confirmation bias, we first have to recognize it. Sure, overcoming the deeply-rooted systems of the internet may be difficult at times, but it is necessary, and it only works if everyone is on board.