‘Pieces of a Woman’: A raw and quiet perspective on grief 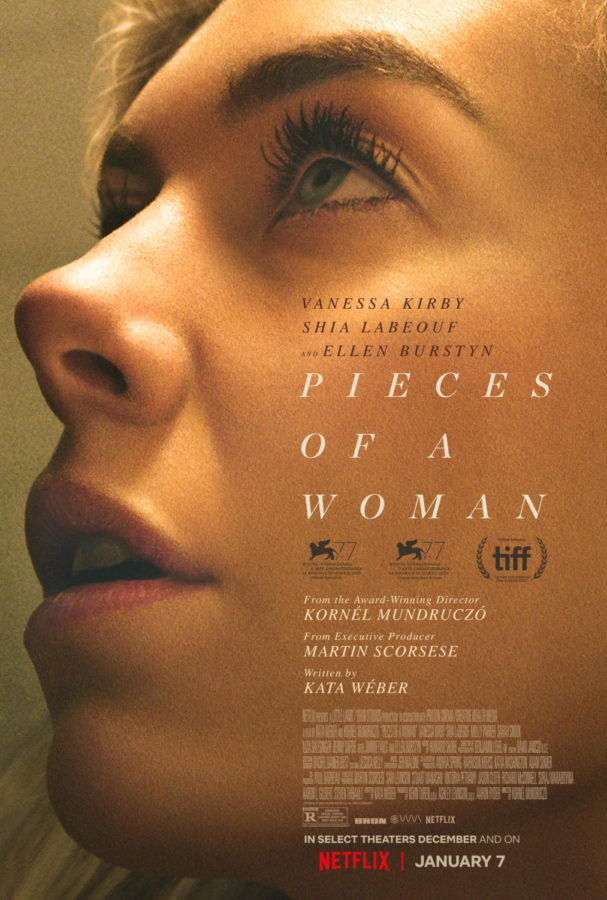 Opened by a heart-wrenching and erratic 30 minute scene, the introduction was more than abrupt. As I sat watching “Pieces of a Woman,” I lost all sense of time. The opening scene illustrates a nightmarish home birth which seems to be unraveling at hyper speed as a young couple goes from feeling youthful excitement to utter fear in the blink of an eye. I’ve never seen a movie provoke such strong emotions before the title of the movie can even flash across the screen.

After the opening scene came to a devastating conclusion, I quickly clicked pause. The severity of the home birth scene had shocked me, and it’s safe to say I became a bit anxious, as well as intrigued, about what the rest of the film had to offer. Upon resuming the movie, I can’t lie: I became a bit bored after being only an hour in. Truthfully, I felt more disappointed than I did bored as the film treaded on the surface of being Oscar-worthy.

The film continues after the tragic home birth scene and slowly depicts the effects of grief on the young couple. As Martha (Vanessa Kirby), the mom, internalizes her grief and tries to get a grip on her life, her husband seems to do the opposite. Sean (Shia Labeouf) begins to drink again and not only begins to cheat on Martha, but turns violent against her.

The violent scenes between Martha and Sean consistently came as a surprise as they were very abruptly placed throughout the movie. I found the scattered placement of such violent and upsetting scenes to continue to cater to this idea of realness within the ambiance of the movie. To make it realistic and perhaps even relatable to viewers who have seen grief affect someone they know in a similar way, director Kornel Mundruczo decided to shock audience members with Sean’s actions just as much as Martha seemed to be shocked by them.

While there are few of these violent scenes scattered throughout the remainder of the film, I still sat there waiting for a scene to provoke me like the opening one did. I feel that they set the bar too high with such an intense opening and so it felt like the movie fell a little flat afterwards.

The rest of the movie felt a bit mundane not because of the acting or production, but due to the actual writing behind the film. The dialogue did remain a bit dry, but I believe that was a stylistic choice to create a boringly realistic and raw take on silent suffering. While the dialogue worked, I feel that the overall plot did not, and that’s where the writers truly fell short. The film had such a strong start, but the end felt very rushed and as characters were quickly written out of the story I was left feeling disappointed.

I found the acting throughout the movie to be extremely impressive and as Martha painstakingly deals with trauma the audience gets the opportunity to understand her experience. Kirby effectively verbally lets on little, but uses her fraught physicality to depict a deeper and harsher reality.

Her acting was not overshadowed by Shia Labeouf as his performance was predictable and a bit worrisome. Labeouf’s character, Sean, deals with his grief in a most destructive and violent manner. The juxtaposition between Sean’s and Martha’s coping mechanisms was so stark that I hoped for a final confrontation or resolution between the two of them at the movie’s conclusion, but instead cringed as Sean seemed to be swept away and off screen weakly by the writers.

I think “Pieces of a Woman” is worth the watch for some, including myself, as it allows for an insight into a very real kind of tragedy that is less talked about both in film and in real life. I would advise all potential viewers to watch this movie with great discretion, as the film takes no easy routes out when covering extreme hardships like child loss, abuse, adultery, grief, substance abuse and sexual assault.

While the movie’s overall content and tone was deeply dark and perhaps misread by certain cliche or unfinished writing, the film’s opening scene and brilliantly raw acting via Kirby makes it one to look out for. I’m glad the film allowed Kirby to fully embrace her role and “show off” some of her incredible acting abilities as well as take the risk of opening the film with such a disturbing scene. Overall, “Pieces of a Woman” wasn’t the movie of the year for me, but it was one that’ll stick with me for a while.