‘Moxie’: An inspiring tale of girl-power 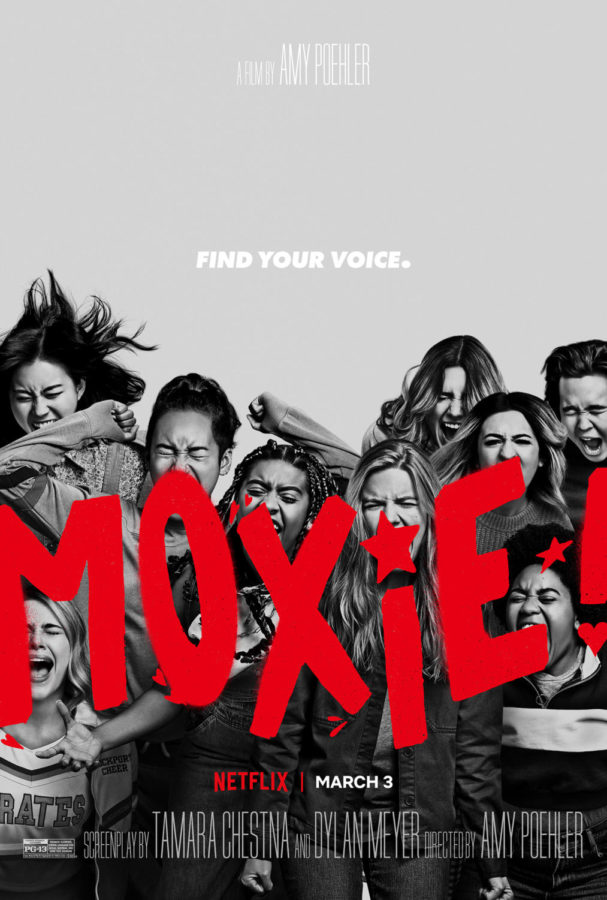 When I first read the description for “Moxie,” I was somewhat confused and wary of if the movie would be good. The description and trailer depicted a teen comedy mixed with a tale of girl power and feminism. “Moxie,” directed by comedian and actress Amy Poehler, is the film adaptation of the Jennifer Mathieu novel.

With an almost all-female cast, “Moxie” tells the story of a feminist revolution told through the eyes of Vivian (Hadley Robinson). When the new student, Lucy (Alycia Pascual-Peña) is constantly harassed by jock Mitchell (Patrick Schwarzenegger), Vivian notices this and sees a problem and starts circulating pamphlets under the pen name “Moxie.” The pamphlets start attracting many readers and make them notice the sexist and discriminatory practices at their school. At the same time, Vivian is confronted with friendship problems and a budding relationship with feminist skater boy Seth (Nico Hiraga).

While the story is told through the eyes of Vivian, I do not think she is the main character. I do believe that it is her duty to tell the story. I think the main character is not really defined either. Some might say the main character is Lucy because she was the face of the Moxie revolution, and while I would have loved to see more about her character, the point of the movie is to not focus too much on the characters but on the plot.

In the film, one of the main things that I noticed was the reference of the book, “The Great Gatsby” by F. Scott Fitzgerald. “The Great Gatsby” is told by the narrator, Nick Carraway, and he is telling the story of Jay Gatsby and Daisy Buchanan. Nick, like Vivian, is affected by the story, but the story doesn’t center around them; it centers around the relationships between all the characters in the story. In “Moxie,” the reason why Vivian started Moxie was due to the toxic and horrible treatment of Lucy by Mitchell. Eventually, Moxie grew into a phenomenon of girls supporting girls.

In terms of cast, “Moxie” not only featured a woman director but also centered around the treatment of women, not just white women but Black, Asian, queer and trans women, which is rarely seen in the film industry.

While it was eye-opening and somewhat inspiring to watch, the ending was predictable. One of the first scenes was Vivian not being able to answer her college essay question, “Reflect on a cause you feel passionate about.” From the trailer and that first scene, I knew what was going to happen: Vivian was going to go through this big eye-opening experience that would change her life and by the end, she would know more about herself and be able to answer that college essay question.

I think I was right. She finds a cause — sexism at her school. She finds a way to solve the problem — distributing the Moxie pamphlets — tries to make a change, and then she becomes this whole different person because of it. She was a timid and quiet girl turned outspoken and ambitious.

While “Moxie” was entertaining to watch, it was a lot to fit in the two hours. If the film was told similarly to the way “Titanic” was told, by an older Vivian, a Vivian who has learned and has had time to reflect, I think it would have been even better.

The one thing that really stuck out was the non-traditional relationship between Seth and Vivian. It has to be one of the sweetest straight relationships I have seen in the film. Seth respects Vivian’s efforts to make a change and respects her. It is stereotypical to have the girl adapt to the man or be the more sensitive one, but in “Moxie” Seth adapts to Vivian and is more sensitive, which is refreshing to see especially because most of the men in “Moxie” are insensitive and mean.

Even though it was a predictable movie, “Moxie” is still a step in the right direction towards starting more conversations about how women are treated in society. Having the cast be a group of diverse women really showed that when talking about women, Black, Asian, queer and trans women must have a seat at the table.