Cancellation of Quinceañera tradition due to COVID-19 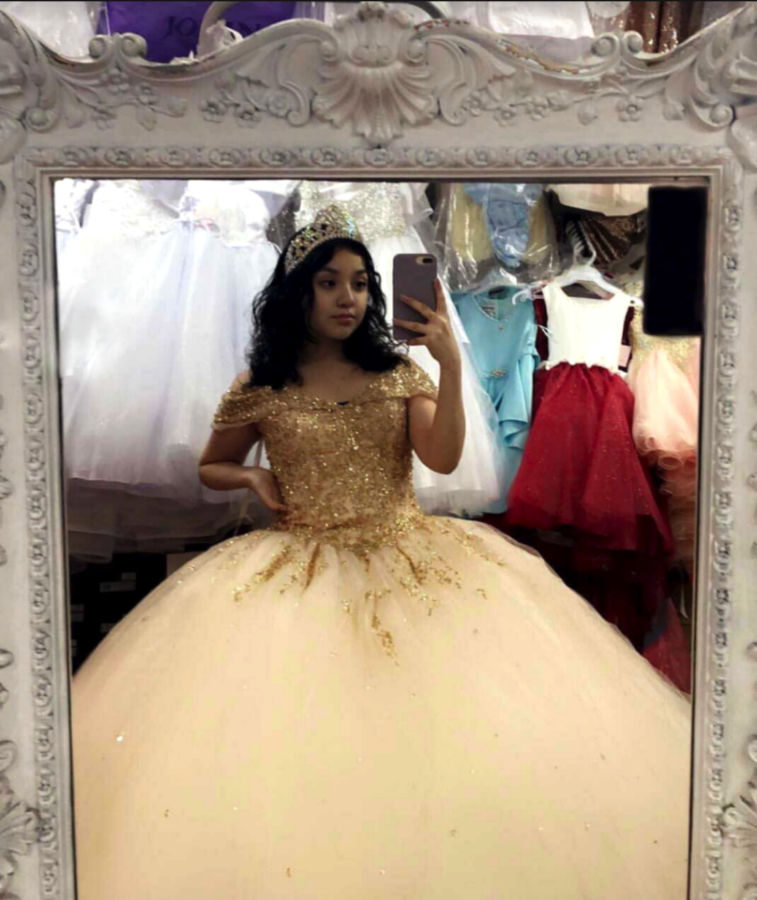 Ariana Medina tried on dresses before the cancellation of her quince in Caritas De Angel boutique, located on West Fullerton Ave in the Belmont Cragin neighborhood. (Photo courtesy of Ariana Medina)

Growing up in a Hispanic household as a young lady often means that 15 years of dedication will go towards one’s quinceanera —  a 15th birthday gathering that is held in a banquet hall amongst friends and family to celebrate the transition from girlhood to womanhood.

Sadly, some Lane Tech students faced the realization that their long held dream of having their big beautiful dress on, enjoying a great time amongst their friends, was canceled due to the pandemic. Not getting to experience this monumental moment — losing the traditional aspect of welcoming their maturity in becoming a woman — was compounded as families encountered the process of canceling a huge event and faced the difficulty of losing money. Coping with such struggles, they decided to celebrate in other ways, such as preparing for small events for their 16th birthdays.

Vianey Mejia Luna, Div. 451, grew up attending her cousins’ quinceaneras, looking forward to something like that for years. Luna was disappointed at the fact that her party got canceled, due to the cancellation of large summer events by Gov. Pritzker.

“We had been watching the news, just to keep ourselves updated,” Luna said. “Then we were on lockdown. When the lockdown kept extending, that’s when we decided, it’s not happening, we should cancel it.”

Her family lost money due to their prepayments for the banquet hall, the dress, and the DJ, Luna said. They lost about $6,000, which couldn’t be retrieved due to the sudden change of plans.

Luna ordered her dress online, but had to deal with shipping problems — the individual who was selling the dress decided to keep the money, and Luna received no dress in return.

Acknowledging what was going on in the media, her guests weren’t astonished at the cancellation.

Luna said, “We had to individually tell everyone that it was canceled and they knew it wouldn’t be possible either because of the virus.”

Luna said she is thinking about having a small get-together with her family for this year, celebrating her sweet 16.

Ariana Medina, Div. 368, initially planned her quinceanera for June 20, 2020, and decided to postpone and instead hold a small get-together with her friends for this year — June 19, 2021. She plans to have a party bus with her close friends for her 16th birthday.

She had planned to have her grandparents visit her on her special day but had to spend her time canceling their airplane tickets, getting none of the money back.

Medina was planning to spend $15,000 on her quince, and her family lost $8,000 before the cancellation of the event.

Families spend on average from $5,000-20,000 on their daughter’s quinceanera, costs that include the food, music, reception hall and invitations.

Roshellie Salgado, Div. 366, would have conversations with her grandmother about what would be expected at her party and how excited she was for it.

Her family had to handle the news that her event was canceled.

“They were kind of disappointed because they spent all this money on the banquet, on my dress already,” Salgado said. “So that part was frustrating.”

Salgado plans to take pictures with her dress to have documentation of her preparation for her quince. She’s also thinking about saving her dress for her 8-year-old cousin.

Through all her pain and suffering Salgado recognizes what she learned.

“Spending the time with your family is what’s most important,” Salgado said. “You don’t really need the whole grand event. Sure, that’s the ideal party for the transition from childhood to womanhood but in reality, it’s not necessary. You’re still transitioning from a child to a woman either way.”