Looking for answers through astrology in the COVID-19 pandemic 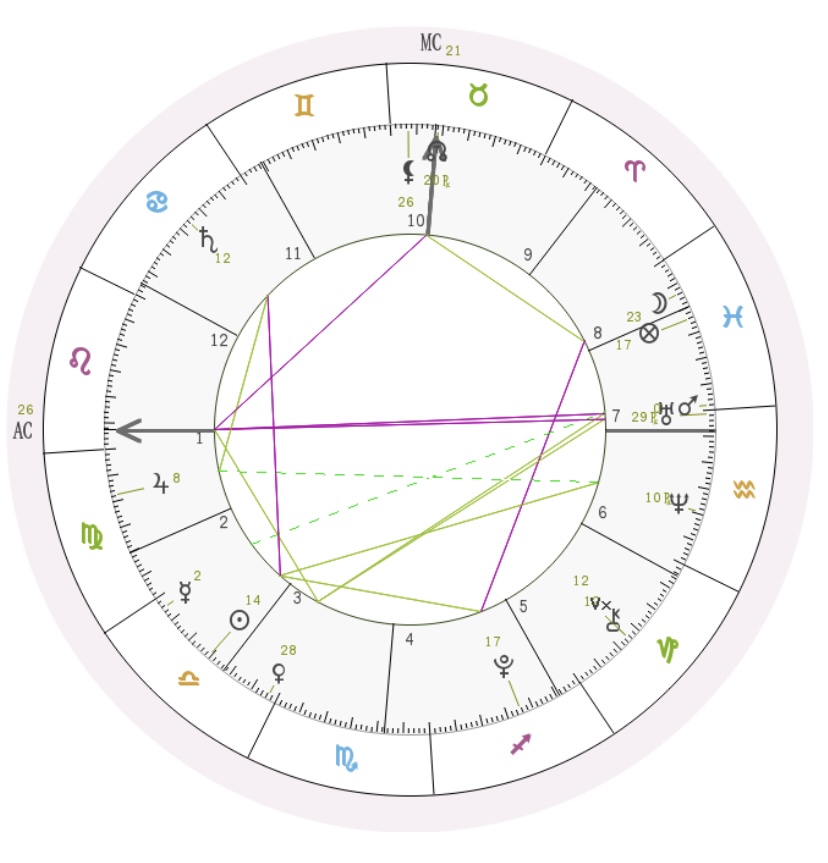 Isabel Veleta’s natal chart shows her the planets’ positions at her time of birth. The placements and their meanings give Veleta an insight into different aspects of her personality and behaviors (Photo courtesy of Isabel Veleta)

After Isabel Veleta’s mother taught her about astrology when she was 5 years old, she started to do her own research. When Veleta began to understand the meaning of her own planetary placements, she said she was also able to notice patterns in her friends and how they aligned with their astrological signs. Now, Veleta continues to study astrology to learn more about herself and others.

According to Britannica, astrology is a form of “divination that involves the forecasting of earthly and human events through the observation and interpretation of the fixed stars, the Sun, the Moon, and the planets.” Through a person’s natal chart, which is a snapshot of the sky at the time of their birth, planetary placements can be analyzed.

The practice of astrology began in the Mesopotamian age when people started naming zodiac constellations. Each zodiac represented one-twelfth of the Sun and Earth’s rotation.

Although astrology is considered a pseudoscience by scientists, people today still look to astrology and their natal chart to find guidance. With the uncertainties brought by the COVID-19 pandemic, people are turning to astrology now more than ever.

In an interview with Business Insider, five astrologers touched on the growth in demand for their services since the pandemic began. They have all experienced an increase in the number of clients and followers they have on their social media platforms, meaning that people are looking for ways to get their questions answered. In a 2019 survey from Fullscreen, it was found that 39% of participants ages 18-34 agreed that they turn to astrology to make sense of things, like Veleta, Div. 270, a Libra Sun, Pisces Moon and Leo rising.

Veleta said that looking at her placements has helped her understand some of her previous and present actions, as well as parts of her personality.

“I am a Pisces Moon and they are known for crying a lot. So, when I was younger I would cry at everything. Everything would make me cry,” Veleta said. “Now that I am older, and I have a Leo Rising, which is the mask that you wear to present yourself to the world, I am a totally different person. Now, I am way more confident and more extroverted.”

While Veleta has studied astrology for a large part of her life, there are others whose journey with astrology has recently begun.

Aylee Alazar, Div. 276, a Cancer Sun, Capricorn Moon, and Virgo Rising, began researching her placements when she was a freshman two years ago. Like Veleta, Alazar was attracted to astrology because she wanted to learn how and if a person’s natal chart impacts their actions.

Alazar now follows professional astrologers on social media, but when she first started learning about the topic she used an app called Co-Star. First, Co-Star generates a natal chart based on the user’s exact birth time, date and place of birth. Once the user’s information is set up in the app, it provides daily horoscopes based on the user’s placements.

Apps like Co-Star and horoscopes can be misleading, according to Veleta, since they can give people false information or reinforce false stereotypes of signs because they are too general.

“I just have a really hard time believing in some of the things that are so general, like Co-Star. I have Co-Star to look at other people’s charts, but the notifications that they give you are just so ridiculously general that I am like, ‘There is no way that this is real,’” Veleta said.

Alazar also said she advises people not to read their horoscope every day because they might be disappointed if something they read does not happen to them. She recommends that people read them a couple of times a month to notice themes or patterns that can guide them throughout the rest of their month.

Although Veleta does not like them personally, she said she won’t stop people from reading their horoscopes if they feel like they are becoming a better person from doing it.

Alazar wants to remind people that they should not take generalizations seriously when they start learning about astrology. According to her, astrology should not be used to judge others, but to learn more about them and who they are.

“Know that just because someone is a Leo it does not mean that they are all the Leo stereotypes,” Alazar said. “It is always good to know more about a sign and the person themselves because stereotypes can be very wrong and damaging.”