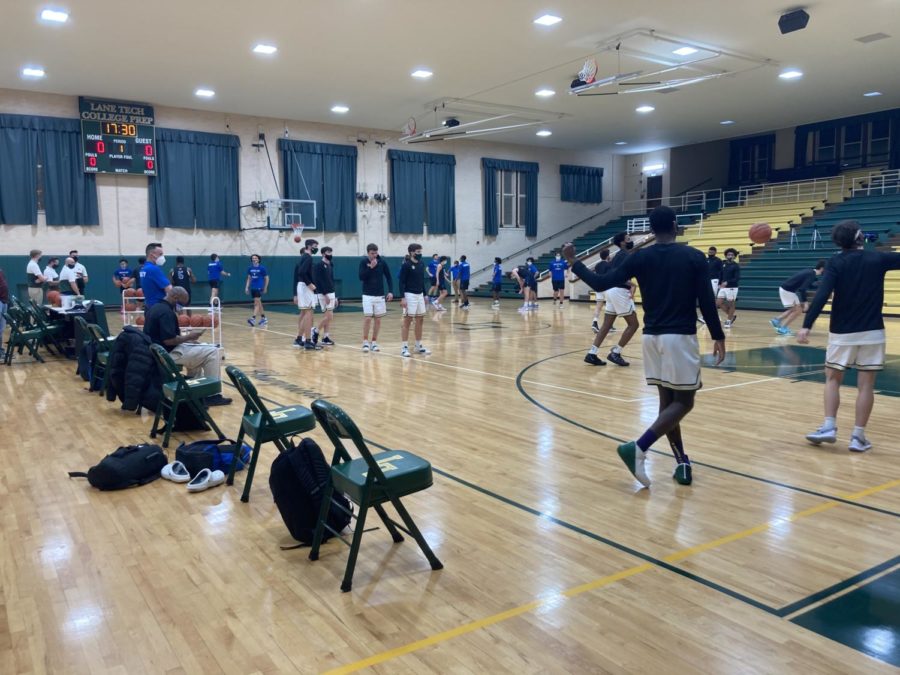 The Lane boys basketball warms up before their game against Taft on March 8. Taft won the rivalry game for the second straight year, beating Lane 56-55.

Unlike past years, with Thanksgiving tournaments and state playoffs, this year’s boys basketball season both started and ended on a quiet note, with cancellations from Farragut to start the year and North Lawndale to end the year.

But Lane was able to get in nine games, finishing with a 3-6 record.

“I purposefully make sure that when we get our schedule together, we always have at least a day of practice to prep before our next game,” boys basketball head coach Nicholas LoGalbo told The Champion via email. “With this season, we played nine games in like 15 days.  It was crazy.”

The season was much shorter than usual (in the previous season Lane played 31 games), but the team still faced their highs and lows during the month of playing.

The team started off strong, going 3-1 in the first four games; however Lane wouldn’t find the win column again after a 56-44 victory over Schurz on March 6, going 0-5 to close out the season.

“Towards the end of the season we were shooting better,” Molloy said. “Like during our Marshall game I think, although we lost, we still were making more threes and I think slowly we got better with our shot selection. We were passing better and I feel like we started to play more as a team towards the end of the year rather than the first few games.”

Injuries haunted Lane near the end of the season, with star senior forwards Chris and Aaron McQueen missing time due to injury. As a result, players like Joseph Perona and Ethan Grunebaum, juniors, saw expanded roles this season and showed they will be big pieces of the program for next season.

Lane only graduated five seniors this year, meaning two-thirds of their players, including one starter in Molloy, will return next season.

Due to the shortened season, no teams will be moving conferences next season in the Chicago Public League (CPL). Lane will remain in the Red North-West, one of the top two CPL conferences.

“We are returning four players [next year] from our rotation and we have some young guys that played big minutes this year so I am very excited for next year,” LoGalbo said. “We will be playing in some of the state’s biggest events (Chicago Elite Classic, DRose Shootout, Proviso West Holiday Tournament and of course, the Battle of the Bridge).”