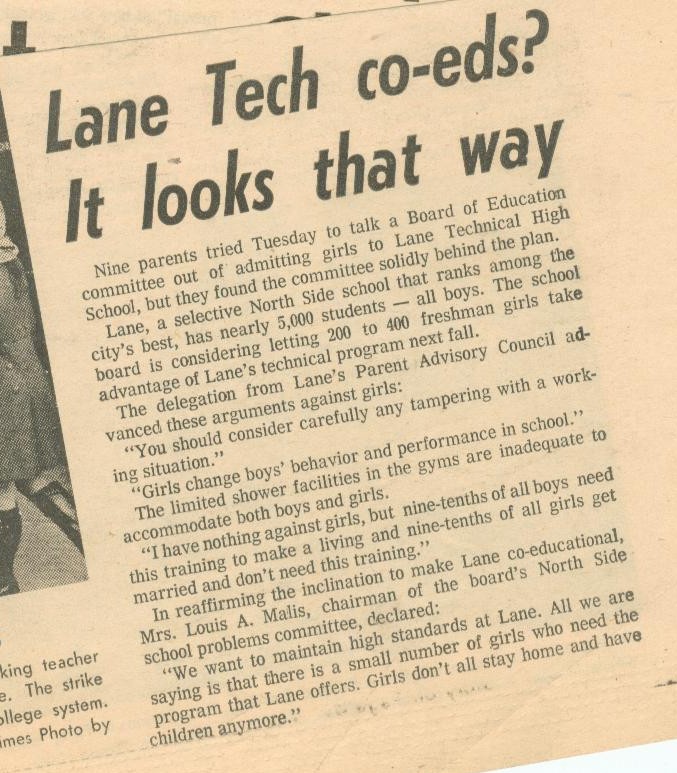 Newly admitted female students made history at the prospect of attending Lane-- an originally all boys school-- but parents thought otherwise and were adamantly against this change. (Photo Courtesy of Michelle Weiner)

History is the foundation for why society is the way it is. It not only teaches us our past but also enriches our future as individuals and as a country. Knowing our history means knowing ourselves, and when we don’t know the history that pertains to us; our dreams can slowly diminish. Women are being undermined for the many legacies they have created and this erasure of history not only negatively affects current generations, but future generations to come.

Mayra Andreu, Div. 175, says that students are being withheld important information that is necessary for improvement in terms of historical knowledge and women’s rights.

“The reason for the lack of representation is that men want to continue to oppress women by withholding their history. We deserve to learn about the struggles women went through and how we can liberate ourselves from male oppression,”Andreu said.

In the late 1800s, an African American woman and teacher named Ida B. Wells openly criticized the poor conditions of Black schools caused by racism in Memphis, Tennessee. Due to her protests, she was removed from her position and decided to become a journalist full-time.

Throughout her journalistic endeavors she fought against the lynching, segregation and economic oppression the Black community was facing. Although she wasn’t able to challenge discrimination nationally, she was able to make many differences in the city of Chicago. When she moved to Chicago, she founded the Negro Fellowship League for Black men, the first-ever kindergarten for Black children, and the first suffrage club for Black women. Ida B. Wells was looked down upon not only as a Black person but as a woman. Despite this, she decided to pursue justice; but her story is not as commonly shared.

Discrimination was and is not only common against BIPOC women, but women as a whole, as seen in the discrimination young girls faced in our own backyard: Lane Tech. The Lane Tech Alumni Association (LTAA) has an upcoming 50th-anniversary celebration of female students being admitted to Lane in September. LTAA President Michelle Weiner shared her experience being part of those first female students accepted into the school. She said there was a great protest amongst not only male students but faculty as well.

“But you could imagine the Friends of Lane, the LSC, the faculty, and all of the male students being against us. I have the original draft of the woman who was the head of whatever you would call the LSC back then. It was a 7-page diatribe that this woman wrote about why girls should not be allowed into the school,” Weiner said.

At the time, Lane was only accepting 318 freshmen and 68 sophomore girls. The ratio of male to female students was large and this led to many uncomfortable situations for the girls who were newly admitted, according to Weiner. Male students had a “No Girls at Lane” walkout to protest their admittance. There was physical aggression from male students and even microaggressions from teachers. Weiner mentioned that there were no female sports teams or clubs, and classes separated the girls, leaving only one to two female students in most classes. Girls were constantly ignored and the prejudice even showed in her history classes throughout the three years she attended the school.

“If you were a woman or if you were a person of color, he [a male teacher] had something snotty to say about everyone.  It was very bizarre.  But in our history classes, I don’t remember ever learning about women in history,” Weiner said.

These first female students made history not only for girls at Lane Tech but for girls in the city of Chicago as a whole.

These monumental movements made by women are not as commonly recognized, state and nation-wide. Although the lack of representation is not as detrimental as it was then, there is still significant underrepresentation.

Lane has recently integrated more diversity into their Civics curriculum due to a state-wide renovated curriculum, but this a recent occurrence. First-year Civics teacher Joy Scott says that the way history classes are taught is highly dependent on a teacher’s pedagogy and whether or not they are willing to tackle diversifying their teachings and abiding by the exact curriculum at the same time.

But the material that is being taught is ultimately decided by state governments, school districts, and schools themselves rather than just individual teachers. Scott said that teachers have a harder time teaching certain things especially if it’s a class preparing for end of year exams such as an AP class or a class that requires students to take certain tests, such as the Illinois Constitution test. They can stray from the general curriculum if they choose to do so, but there is a heavier burden when it comes to trying to tackle all the possible material that can be taught.

“My mentor teacher struggled to have her students prepare for the exam and recognize that the people that are in the curriculum and in the content are not necessarily reflected in who was sitting in our classroom,” Scott said.

She said that if a history class is considered diverse, this is most likely the result of students asking for more diversity because the general curriculum doesn’t always exemplify that.

“What I’ve learned about ethnic studies, social movements, and women’s studies is that students are asking to learn more or rather demanding to learn more from their professors or teachers or their institutions because it is such a shift from the general curriculum,” Scott said.

Andreu, who is a senior, said that her experience throughout her school career in terms of history classes was “passive teaching” — meaning a presentation with lots of different information and just note taking, according to Andreu — and this resulted in her being less inclined to engage in class. But since then she labels herself as politically and historically literate due to her own research and political theory, not from what she’s learned in school.

A 2017 Smithsonian Magazine study stated that one woman for every three men is talked about in high school history classes.  Andreu said that she strongly feels the absence of women’s teachings in class. A common narrative and bias that she’s noticed are the teachings of cisgender white men.

“I think that they will always hold privilege under a capitalist society. I believe that most, if not all, of us have inherited a white heteronormative male template because history classes perpetuate it,” Andreu said. “History has always been taught through the lens of a white man and never through the perspectives of women. Without recognizing this discussion and implementing solutions, schools will never appropriately diversify its curriculum.”

The statistics for the lack of women’s history being taught can be attributed to the documentation of events throughout history. Not only is the white male narrative still prevalent in modern history classes, but sources being provided to schools are typically the work of white men as well.

As society continues to change, the way history is being taught is also changing, albeit slowly. According to Scott, this change is important because without diversification an important element of history is missing: corroboration.

“A major skill in history is corroboration: it’s the ability to look at different sources and perspectives and compare them,” Scott said. “It’s about coming to your own conclusions and your own analysis of them. You can’t have a full analysis without the full picture and without the different voices that make up our society.”

Andreu says that the lack of female representation is detrimental for learning purposes but it also refutes the idea of an equitable society. Although schools are no longer taking extremes, such as segregating based on gender, as they were before, she feels that there is still a stigma created by underrepresentation.  She says that instead of seeking gender equality women should be taught how to achieve gender liberation. She feels that underrepresentation correlates to rights and the way women function in society and the only way to achieve positive changes is through active participation.

“Women are taught that if they try hard enough that one day they could maybe be powerful as a male CEO or politician or lawyer,” Andreu said. “However, we should not want a facade of equality where women treat men the way they already treat us. These women are being assumed the role of a man, which in itself is sexist. We should be taught how to achieve gender liberation and some examples can include decentering men from our thoughts and lives, mutual aid, separatism, building class consciousness, unlearning stereotypes placed on women, and challenging male supremacy.”

As a young biracial woman, I find that learning what my ancestors experienced is essential. What they have achieved shows me and other BIPOC women that we are capable of obtaining and achieving remarkable things regardless of the underlying shackles of our backgrounds. By undermining women’s successes and denying women’s subordination, schools are withholding information that may help us achieve true equality. Diversification is slowly being implemented into schools and I hope they continue to do so, so that young girls can see themselves reflected in what they learn and incorporate that into all facets of life and continue to make history.