Research shows that more and more parents are relying on Facebook groups to get information about their kid’s schools. Parent Facebook groups are run by parents of the school offering advice, answering questions, and sometimes clashing with each other on school issues. 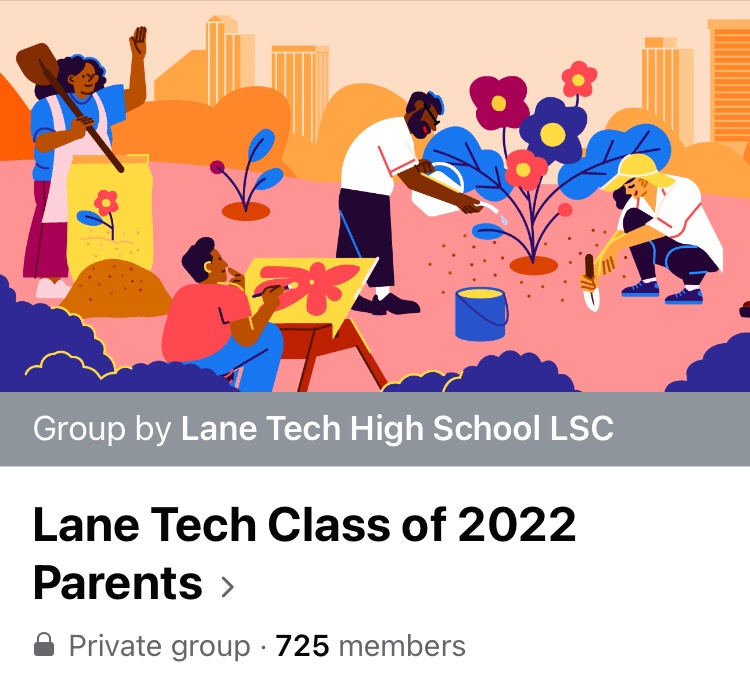 Screenshot from the Lane Tech Parents Class of 2022 Facebook page.

Facebook’s group functions are one of the most popular features of the app, with over 1.8 billion groups to choose from. I noticed many of those groups are parent groups that offer advice and ask questions about other parents’ experiences. These range from groups about kids who are homeschooled to private adoption groups helping with the adoption process. These groups also include groups for parents made by schools. I’ve noticed throughout my time as a student for almost twelve years, the presence of these groups has increased as time has gone on.

Lane Tech is no exception to that and has five parent Facebook groups run by parents. There is a separate page for every class except for the Academic Center — grades seven and eight — which is combined into one group.

These groups offer a way for parents of the school to connect by asking questions, giving advice and reposting important information sent by the school. Both of my parents are on the page. My mom often likes to share the information with me from the page because a lot of it is helpful information that pertains to my class. SAT, AP and college admissions information have all been helpful.

MaryAnne Hanlon is a Lane Tech mom who has been on the Lane parent Facebook pages since her child was in the Academic Center. She said the group was helpful from the beginning — when parents started to reach out because they were all in the same boat.

“They [the groups] have really helped me in terms of general knowledge about what’s going on,” Hanlon said. “I’m someone who likes to know what’s going on  — so it’s been important in that way.”

Colleen Contreras is a Lane Tech parent who is an admin on one of the pages and a contributor on the other pages. She has been on Lane parent Facebook groups since her first child started in the Academic Center. She says the group’s purpose is to share information concerning school and CPS issues.

“Sometimes people are asking questions just to verify that they’re getting accurate information from their kids,” Contreras said. “A lot of the time it’s questions and they [the parents] figure, this is a good target audience for me to ask a question.”

When Contreras’ kids were younger and in elementary school, all school information was handed to the parents. As her kids became older, it became harder to get that crucial information from the schools. This is what makes the groups such a good resource for high schooled-aged parents: it’s handed to them just like it was when their kids were younger.

“Now you’re in high school, we’re not getting all the information that you guys are getting, so sometimes we have questions and we can help each other out by sharing information,” Contreras said.

Kristene Richardson is an admin on all five of the groups and has been an admin since her daughter was in the Academic Center. Richardson said the parent groups save the Lane administration from getting countless emails on things like how to fill out an attendance form, what the finals schedule looks like, and many more.

“Sometimes a parent might feel that they may not want to call the school to answer a question that’s been answered a thousand times. This is kind of a soft way to answer that question,” Richardson said.

Contreras agrees. “Oftentimes veteran parents —  parents who have been through the junior year of high school or through that with an only child — will share relevant and helpful information.”

The two admins (Richardson and Contreras), have certain capabilities which other members do not. They can approve posts before they are posted, delete posts, approve parents wanting to join the groups, and sometimes have to play mediator among the parents.

“If things get too contentious among parents, an admin will oftentimes have to step in and facilitate a peaceful discussion,” Contreras said.

Contreras said that the majority of posts are helpful, either relating to Lane or CPS. But she says that she draws the line when the posts become irrelevant to the Lane or CPS community.

“If it’s something completely irrelevant or it seems irrelevant, I would often message the original poster, just ask them — did you mean to post that here or not,” Contreras said.

These irrelevant posts can be accidental posts (when someone means to post something on their personal timeline and instead posts it on the school Facebook page), comments where people are getting into arguments with each other, or if something doesn’t fit the group’s purpose of sharing school-related information.

According to Contreras, the way to know if something fits within the group is to read the “about” section of the group. Contreras said the mission of the pages is for parents of the Lane Tech community to share information with each other regarding school and other relevant CPS issues.

Richardson said that these irrelevant posts have been increasing during the height of the pandemic and the election.

“I generally don’t have [to] police the posts, but I think it was the time, the moment, and a lot of external pressure,” Richardson said. “It was certainly happening across my personal social media and it didn’t surprise me that it was happening within our small world of Lane Tech.”

I’ve certainly noticed my own social media becoming more congested and divided as the pandemic has turned out to be more political than a health scare. I constantly see people arguing with each other in the comments section about whether a vaccine is effective or if the 2020 presidential election was rigged. I can’t seem to escape it no matter the times I press “not interested.”

My parents have also shared the same experience that I have with my social media, except theirs is on Facebook. Sometimes my parents will come running to me to show me a post where someone made a stupid comment or people started bickering with each other in the comment section to share a laugh. In these times, middle-aged parents arguing on a Facebook page about the price of college or which types of APs their kid is taking is funny.

However, not everyone has the same outlook. Hanlon offers a different viewpoint than Richardson on the drama on the page.

“So there is drama, but I’m not surprised by it, because if we were standing around the school, perhaps like we did when our kids were in kindergarten, the same kind of drama was just being voiced instead of written on Facebook,” Hanlon said. “It’s possible people are not as careful because they’re writing it, they’re not saying it in front of the person you’re speaking to  —  but, it’s the same kind of drama  — it’s nothing new that I’ve seen.”

As a kid who spent the majority of my time after school with parents, listening to their drama instead of playing with other kids, I can attest to this. Sometimes it was a mean kid, a scandal, or a teacher who was treating kids unfairly. However, unlike the moms I was forced to listen to, Lane’s Facebook pages shut down any negative discourse on a specific teacher or class.

The admins will usually make some kind of comment on the drama to try and facilitate the discussion to make it much more peaceful. Richardson once had to pick up the phone and call a parent who was posting irrelevant posts.

“I had an uncomfortable conversation,” Richardson said. “People need to be redirected and I feel like sometimes the only way to do that is personal.”

My mom has shown me large threads from the Lane parents’ Facebook page where people are voicing their frustrations about why teachers aren’t teaching inside the building remotely or why the teachers are striking.

“During the strike — when people were blaming teachers — some people got a little heated about it,” Hanlon said. “The ones that are upset about something are the ones who are speaking out.”

Contreras had a different experience with the types of discussion.

“I think it’s a dialogue about important issues. But mostly everyone is very respectful and well behaved and it is very rare an admin has to step in and defuse the situation,” Contreras said.

In a poll of families about where parents got most of their information, parent and family Facebook groups are ranked the highest above schools’ websites or even students.

Families obviously trust these groups because they get a lot of their information from there.  These groups have a priority to post accurate information, or else families may be led down a hole of misinformation. Their responsibility is to provide helpful information, especially when so many parents rely on them.

But do these groups reach every single parent? According to Richardson, no; she said they only reach about a third of the parent population.

“I feel that the parent population is underrepresented on Facebook and underrepresented by way of people of color and I don’t know why,” Richardson said. “We tend to have white, sometimes Hispanic parents and again since it’s an organic thing, we let people know that friends of Lane administers these pages and you’re welcome to join, but some people don’t have Facebook.”

For me, personally, the group has given my parents a lot of information about school. I have always been an independent person; filling out forms by myself that normally my parents would have to do. Because of that, my parents are not always in the loop about what is happening at school and the group helps them stay engaged.

For students who don’t share information with their parents, the Lane Parent Facebook pages are a good place for them. The group allows parents to find out crucial information that will greatly benefit them in the future. It also helps a parent stay more connected to their school community.

“If we on the Facebook page could give any advice to the students, it would be to read your emails and share the information with your parents — that is important,” Contreras said.

On the other side, for an overly engaged student, peering over at your mom’s phone to see what middle-aged parents are arguing about also makes for some fun entertainment. Especially when there’s no school and nothing interesting seems to be on TV. However, it can be harmful for the parent who looks at the page expecting to only find information that pertains to their kid. The page’s pros and cons depend on the type of kid one has and the type of parent one is. They can be good for information, but can get annoying when there are already people arguing all over social media.