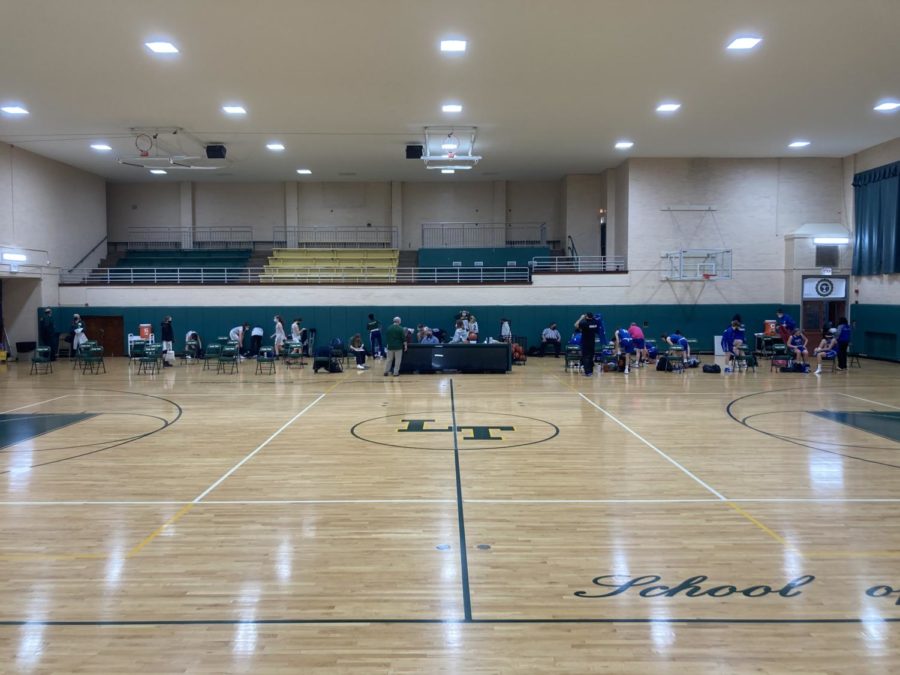 Lane Gymnasium being set up for girls basketball senior night, a 66-46 loss to Taft.

The Lane girls basketball team was coming off a third place finish in the Chicago Public Red North-West, one of the most competitive conferences in the state, when the world shut down due to the COVID-19 pandemic in March of 2020.

It took the year, but the team finally returned to the court in February for a shortened season, going 4-5 over a nine game conference-only schedule.

Despite not as strong of a season as last year, according to junior Anastasia Lamperis, Div. 259, the team made the most of the shortened season.

“There were times where we were realizing one day someone could get sick and we wouldn’t be able to have any more games or any more practices, and this could be our last practice or our last game, so we were always just making sure that we were playing like it could be our last day,” Lamperis said.

Lamperis, who averaged over 14 points per game, was one of the stars for a Lane team that had to start from scratch this year, blending together a group of seniors and juniors, many of whom had never played together before.

“It was hard in the beginning, obviously, one week of playing and going to practice together — we all bonded so well,” Lamperis said.

Even with the many changes during the pandemic, such as masks while playing and no fans in the stands, the season went rather smoothly, with no cancellations and the team adjusting, according to Head Coach Molly Molloy.

And although the gym was mostly empty, Molloy pointed to energy from the bench that kept the team motivated.

An injury to senior Eily Quinn, who was averaging nearly eight points a game, caused her to miss the last four games of the season. With the loss of a star player, Lane went 1-4 in their last five games, including a three-game skid to end the year.

While Lane fell under .500 for the first time since 2018-19, the team has the tools to compete next year, returning eight players. Molloy said the team will be looking to once again finish top three in the conference.

“I’m just excited to meet the new players [next season] that are going to be on our team, and I just hope our dynamic is as strong as it was this year,” Lamperis said.