The Lane Tech Champion • May 3, 2021 • https://lanetechchampion.org/11044/sports/lane-off-to-a-hot-start-as-high-school-baseball-returns-in-illinois/ 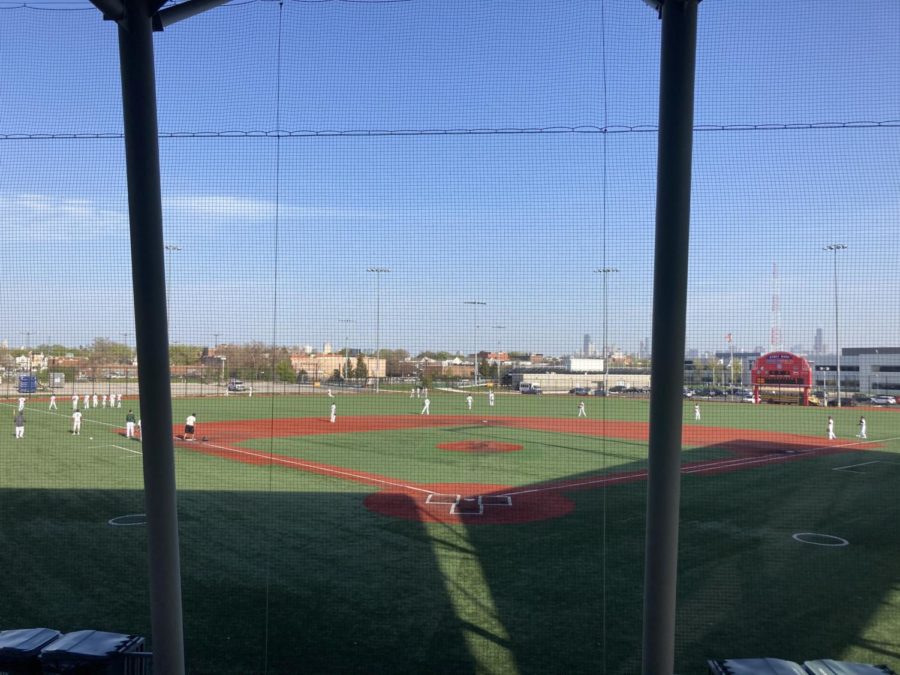 Lane Tech and Northside players warm up before their game on April 26. Lane went on to win 10-0 in five innings.

With the cancellation of the 2020 high school baseball season in Illinois, for almost two years the Lane Tech baseball team was away from Kerry Wood Field. But, with IHSA baseball returning in early April, one would not be able to tell the Lane team hadn’t played for that long.

Lane, currently holding a 10-2 record, has had a nearly perfect start to the season, with a perfect 6-0 conference record and a #16 ranking in Illinois by Illinois Prep Baseball Report (PBR).

“We have a strong chemistry and learned how to work together to score runs and play strong defense,” senior second baseman Josh Aguiniga told The Champion via direct message.

Both at the plate and in the field, Lane has found success early in the season, keeping opponents to three or less runs in seven games, while also mercy-ruling teams in four games.

Aguiniga, who has batted third most of the year, has been a big part of the strong batting lineup for Lane this year.

“Personally I stuck to my routine [over the offseason] and worked any moment I got,” Aguiniga said.

Lane has found themselves on the losing end against two ranked opponents this year, Lincoln-Way East (currently ranked #3 by PBR) and Warren (#25), but was still able to get a win over #19 ranked St. Rita in an extra innings thriller on April 25.

Wins against St. Rita, as well as against strong Evanston and Maine South teams, are helping build Lane’s resume for high sectional seeding in the IHSA state series, where they will be hoping to win their third straight regional title.

Despite the ranking (Lane is the only CPS team to be ranked), the team is going about their games as normal.

“[Being ranked] doesn’t change our mindset,” Aguiniga said. “We stick to our game style and play hard for each other.”

The season still has a long way to go, with state playoffs not starting until early June. Lane has 15 games left on the schedule, as well as city playoffs, where Lane will look to compete for a city title.

Lane, playing in the Jackie Robinson North CPL conference, is the only team to have started conference play with a 6-0 record, meaning they are on pace for high seeding in the city playoffs. Taft, Payton and Lake View trail right behind Lane in the conference standings, with Lane still to play a two-game series against all three of those teams.

Being a low-risk outdoors sport, baseball has had fewer COVID-19 restrictions; however, limited preseason practice space and no buses for teams have been a couple of obstacles for Lane and teams across the state this year. Additionally, one positive test could knock the whole team out on COVID-19 protocol, meaning the players have to be extra careful.

“The most difficult part of playing this year is making sure everyone is accountable to stay healthy,” Aguiniga said.

With still a month left in the season, fans will have to wait until June how this season will end. However, with the right tools in place, Lane could be in a position to contend for a sectional title against some of the other top teams in the state.

“My expectations are to continue playing hard as a team and work together to win ball games,” Aguiniga said.