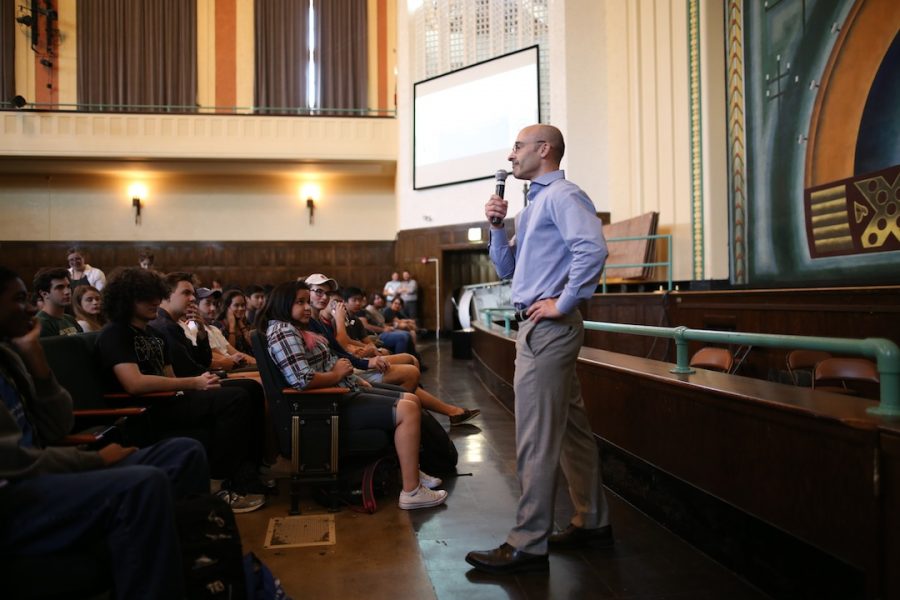 Principal Tennison wasted no time acclimating to his new role when he first became principal. Here, Tennison is addressing freshmen and juniors at the annual Rules Meeting on September 13, 2016.

One of Principal Brian Tennison’s self-proclaimed goals at the start of his tenure was to shake or high-five the hand of every single Lane student. And while no one can say whether or not this lofty goal was actually accomplished, he did become a fixture of the everyday Lane ecosystem, roaming the halls with the steady crush of students, teachers, janitors, and support workers, and of course, never shying away from a greeting.

Nearly five years from when he set those goals in 2016, Tennison will be resigning at the end of the school year. In a principal communication sent out to the entire Lane community late Tuesday evening, Tennison announced he will be leaving Lane Tech before next school year. He will be joining the Elgin Public Schools District, known as U-46, the second largest in Illinois, as “Executive Director of High Schools.”

Before announcing his resignation in the email, he touched on Lane’s stellar ranking and improvement.

“Lane has risen in national ranking and is third in the state for college readiness. Lane is a strong school with a bright future. Lane is an example of the power of community,” he wrote.

On the heels of a national reckoning on the nature of the police force in this country and several deadly and dangerous incidents involving school resource officers (SRO) nationally, Tennison was the principal to oversee the SRO removal at Lane, bowing to the passionate activism of many students pushing for their removal.

“Even if one student feels uncomfortable,” he said at an LSC meeting, “SROs should not be in the building.”

Tennison has spent most of his career in CPS, cutting his teeth as a substitute teacher in Naperville before moving up career rungs during 16 years at Whitney Young as a social studies teacher, eventually becoming a dean. From there, he became an assistant principal at Von Steuben and then Taft before making his way to Lane. Tennison was confirmed in a 2016 LSC meeting by a margin of 10 votes to 1, signing a four-year contract.

Prior to his arrival, the Lane leadership role was marred by inconsistency: Tennison was the fourth principal in five years for Lane.

In the communication, he wrote that he will work with staff and the Local School Council and to make sure there is a smooth transition for his successor.

He expressed his gratitude to parents and students. In his farewell to students, he cited his iconic, “Empathy, Kindness and Respect.”

“I hope you know how special and truly beautiful each of you is as a person. I wish you fierce kindness, bold empathy, and deep respect,” Tennison wrote.

For his part, Tennison was a believer in student press rights. Featured in multiple Champion (then Warrior) stories across his Lane tenure and quoted in many, he was even nominated by this publication’s adviser, and eventually won, the 2018 McCormick Foundation Principal of the Year Award, recognizing not only his support for his students’ constitutional rights, but also the authority of the school newspaper itself in determining and printing content.

As of the time the announcement was made, there was no additional information as to who would take Tennison’s position but what was clear was his gratitude towards Lane.

“Thank you for your many notes of encouragement, ideas, and concerns over the years,” Tennison wrote in the email sent out to the Lane community.

In an email to The Champion, Assistant Principal Hanly said that Tennison will stay until the end of the school year.

“I will miss his motto of always putting students’ needs first and creating the culture of kindness, empathy, and respect,” Hanly said.

In an email to The Champion, Principal Tennison said, “I want students to know how the school exists for them. The education is for them as individuals. It has been the pinnacle of my career to be their principal. I will miss you all.”