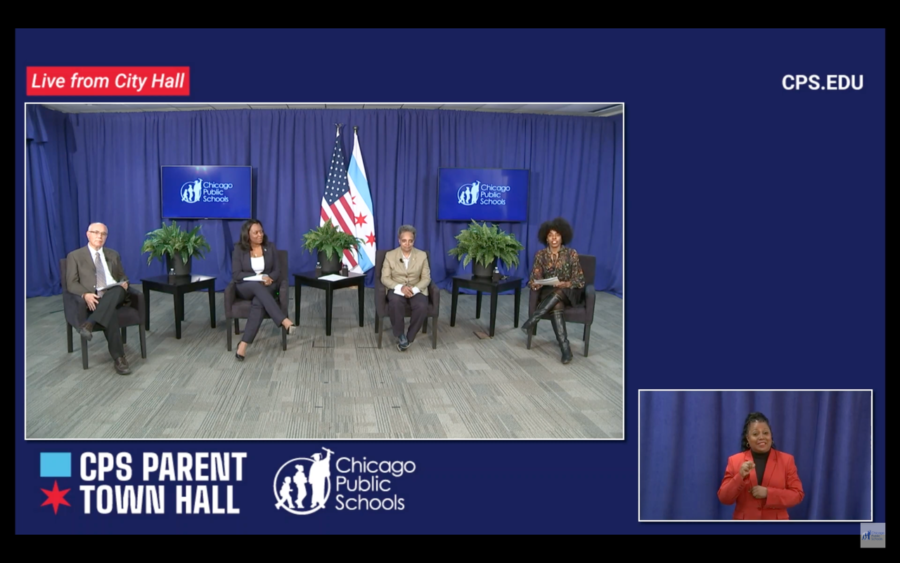 Outgoing CPS Chief Executive Officer (CEO) Janice Jackson reiterated many of the goals she and the district prioritized during the latter half half of her tenure at a Thursday night virtual town hall on May 6, saying there “is no reason we can’t open schools in the fall.”

Jackson, Mayor Lori Lightfoot, and School Board President Miguel Del Valle led the May 6 meeting streamed live from City Hall, focusing on the CEO’s departure, summer opportunities and programs for students and parents, and pre-selected questions from parents and stakeholders.

Lightfoot and Del Valle started the evening by applauding Jackson’s time as CEO, with Lightfoot saying her legacy as leader will be “long-lasting, because she has led with integrity and led by example.”

The mayor cited increasing test scores as one highlight of the CEO’s tenure, along with “students reaching ever-increasing heights of promise” and “new highs of college enrollment.”

Because of Jackson, Lightfoot said, “CPS is the strongest it has ever been.”

The process for hiring  a new CEO has already started, according to Lightfoot, and the nationwide search will soon commence. The mayor encouraged those within the CPS system who feel they have the “bandwidth, experience and passion for our children” to apply.

Lightfoot also said that the hiring process would take into consideration the voices of CPS parents and stakeholders. She said she anticipated surveys and focus groups to include those voices.

Around the half hour mark of the meeting, an attendee asked about what support or intervention there would be for students who have struggled during remote learning and the past school year.

Jackson said lists of struggling students based on grades and test scores have been given to principals in order for schools to conduct direct outreach and speak with families and parents.

“If you have not been contacted or received anything from your school, definitely reach out to your principal,” Jackson said.

CPS will be offering credit recovery this summer to any students who failed a course, along with “double hour efforts for English-Language Learners.”

Also to be launched is a new “equity-focused” curriculum called the “Skyline Initiative,” branded as a “scientifically rigorous, culturally relevant curriculum” by the panel.

According to a 2019 presentation on the curriculum, the first three years of the program are estimated to cost $45 million, tapering off to an estimated $20 million four years after its proposed roll-out this year.

Additional funds have been allocated for enrichment activities across the city — programming geared to 90,000 students, and possibly more, based on demand. Lightfoot said there would be around 250,000 opportunities for students to be engaged this summer, such as the summer jobs program, a program heavily pushed by the city.

There are more open spots than applicants for the One Summer Chicago program, which the mayor has pushed previously.

Also mentioned was the Choose To Change Program and Green Corps, along with the Park District and libraries, which will be open across the city.

As for the wider reopening process, the panel felt that a relatively smooth CPS hybrid reopening was evidence enough to demonstrate “we can reopen schools safely.” Lightfoot said that over $100 million has been put into schools this year to make them safe.

As of writing, weekly COVID cases in the district are at a high for the school district this year, with two new cases, one marked as a “possible” and another a “reported” case, at Lane within the first week of May.

Lightfoot later said that CPS has “never had this kind of money,” much of which comes from the federal government, which has consistently pushed for a full in-person reopening of the educational system as soon as possible.

After an attendee-submitted question claimed that students with IEPs (Individualized Education Plans for students who have a disability) are treated as “second class citizens” by the public school system, Jackson acknowledged the emotion and sentiment behind the question.

“It has been a challenge educating students with disabilities during the pandemic. The whole purpose of an IEP is to provide an individualized plan, and it’s hard to do that remotely when a lot of shifts were occurring.”

Lightfoot interjected, saying that this was precisely the reason why these students were prioritized during the transition to in-person learning, specifically with the Cluster Program.

“Teachers were able to become more creative, but it took us a while to get there,” Jackson acknowledged.

“I think our clinicians, teachers, learned how to provide services through a virtual model,” she said.

The Extended School Year program is provided to diverse learners if the option is needed, she added.

“No parent should feel their child is treated as a second-class citizen within our system,” Del Valle said. “I don’t want anyone to feel that way.”

“Now that they’re back we want to make sure we not only continue to make progress, but accelerate the process and use the resources” he continued.

Del Valle pointed to an infusion of funds for the Diverse Learners program to be seen in the next budget.

“I hope the day comes that Alex,” the name of the person who submitted the question, “and others do not feel that diverse learners and others are treated like second-class citizens,” Del Valle said.