The Lane Tech Champion • May 15, 2021 • https://lanetechchampion.org/11067/sports/murrays-hat-trick-propels-girls-soccer-to-victory-over-payton-in-regular-season-finale/ 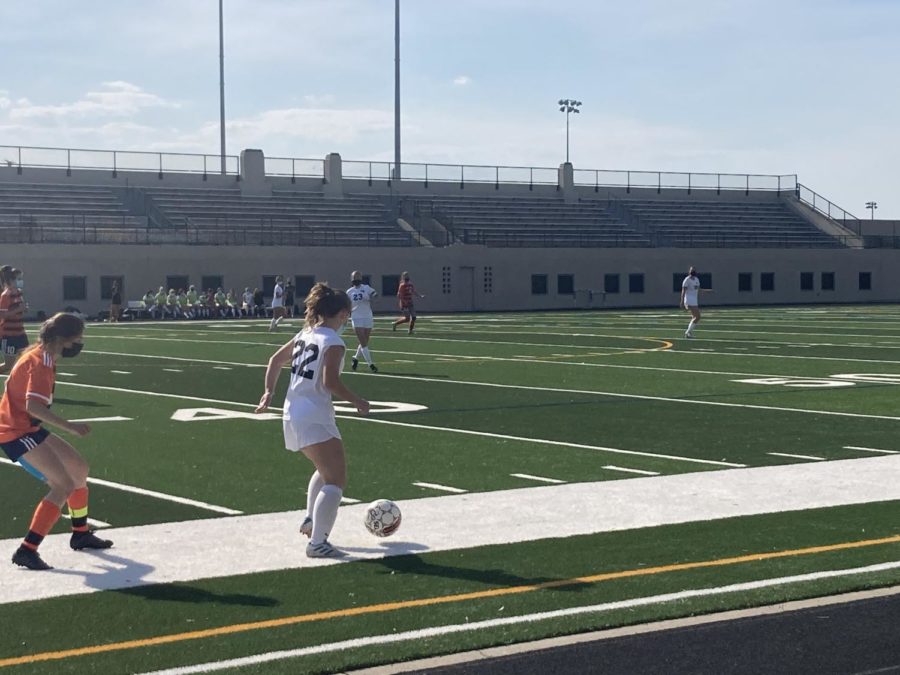 Junior midfielder Scout Murray (#22) receives a pass during Girls Soccer's 4-0 win over Payton on Friday, May 14.

After scoring six goals in the first half against Solorio on Wednesday (en route to a 7-0 win), Lane Tech Girls Soccer was ready for another fast start last night.

“‘First five minutes make sure to get one.”

According to junior Scout Murray, that’s what was said in a pregame huddle yesterday, referring to scoring an early goal against the Payton Grizzlies in their regular season finale on Friday.

Murray took those words to heart, scoring a goal from the right side of the field, assisted by senior Lisa Rios, less than two minutes into the game. She’d tack on two more, as Lane played to a 4-0 victory to close out their regular season with a record of 6-3-2.

“[Talking about scoring early] always brings up our confidence and makes us play better, so that’s exactly what we did,” Murray said.

The strong start held through the first half, including one more goal, this time on the left side from Murray assisted by sophomore Mary Rau with less than a minute to go in the half, as well as a strong line of defense.

Despite the early lead, Girls Soccer Head Coach Michelle Vale made sure the team knew to keep the energy up for the second half of play.

“Earlier in the season we had two ties against two of our strongest opponents,” Vale said. “We had a tie against [Whitney] Young and a tie against Jones. And one of the things that I told my team during the halftime was I didn’t want to see that happen again today.”

The Grizzlies were able to build some momentum at the very start of the half, with two close misses, including one just to the side of the goal post by Payton sophomore Lola Feuer.

But, Lane was quickly able to settle into a rhythm, with Murray making it a hat trick just over three minutes into the second half, scoring another goal assisted by Rau.

Maria Katsogridakis makes it 4-0 Lane with under 32 minutes to go. pic.twitter.com/8xt9ZlhLxC

Lane’s junior goalkeeper Petra Oganovich would put the cherry on the sundae with a penalty save with around 18 minutes to go in the game.

“I think right away we got the intensity up,” Murray said. “And we decided early on that this is going to be our game, considering we tied both Whitney and Jones, so we knew that we needed to step this up because we had to win this game.”

Lane, who currently sits second in the Chicago Public Premier Conference behind Whitney with a 5-0-2 conference record, will begin their postseason run next week, with group play matches for city playoffs slotted for Tuesday, Thursday and Saturday. Regionals for state playoffs are set to begin May 31.

“It was really important [we win the regular season finale] because I think we did need confidence, considering we have tied games I think we should have won, and so that’s what we did,” Murray said.

Of course, this season has been anything but normal for the players on the field, with limited conditioning ahead of the season, masks on the field and more. Despite this, the offense and defense were able to play in sync last night, something Coach Vale said has been difficult to achieve.

“It’s been really challenging [to get the team in sync] because we had to mix in conditioning with our training,” Vale said. “And in addition to that, a lot of our players are from either the former JV team or they are younger players, and so they didn’t have a lot of experience on varsity. So it’s been a year of a lot of teaching and learning, and just rolling with the punches.”

Now, the team prepares for what they hope will be another strong year in the city playoffs (Lane has won the city title each of the past five competitions), and a run in the Illinois High School Association state playoffs.

“I expect us to go as far as we possibly can. I expect us to make a showing at the city playoff[s], at the city final,” Vale said. “I definitely think that this is a really special team. Given all of the obstacles that they’ve had to face, they are still continuing to grow and grow each day, and they’re persevering despite the pandemic.”