Instagram drama accounts — are they your friend or foe? 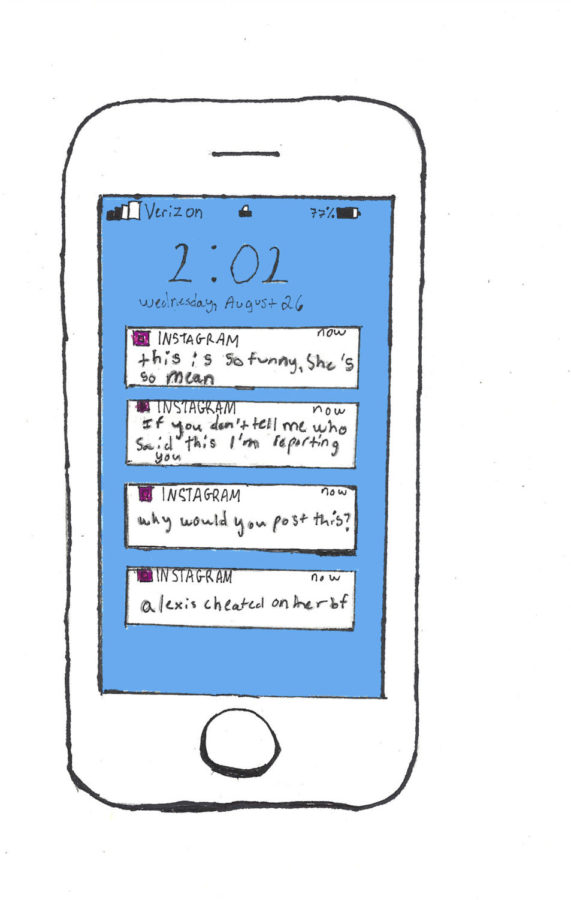 They called me gossip girl. I knew everything about school and its drama nestled quietly inside my small iPhone. I knew who the nice and the mean kids were and who was secretly despicable behind closed doors. I ran the school yet I had never even stepped inside of it — I lived 700 miles away going to another school and did this all from my phone remotely —  climbing over the social hierarchy of the school to queen.

I did this by creating an Instagram confession account for that school — an account where students could submit their anonymous drama. The idea struck me when I saw a TikTok of someone doing just that for the purpose of running a school they didn’t attend in order to make new drama for that school. Kylie Gardner, from South Shore, Massachusetts, saw the same Tik Tok as me and also made an account for a school she didn’t go to, yet this time, it was my school.

“I was trying to find a school that I thought would have the most drama to entertain me during these boring quarantine times and I decided to choose the biggest school in Chicago because it has most kids — it’s a city, so they’d have to have drama,” Gardner said in a phone interview.

For me, I decided to choose the school I would’ve gone to if I had never moved to Chicago. I was born in Syracuse, New York, and moved to Chicago when I was in elementary school. I wanted to reconnect with the kids I was friends with but also find out what type of person I would’ve been if I stayed.

So I made my account, just like Gardner did, and confessions started to roll in. Instantly, my account grew in popularity as more drama was sent in. But as new confessions were sent in, my consciousness began to flood with new worries — was I a perpetrator of cyberbullying?

Maggie Wu, a follower of my page and a student at the school for which I made the account said the anonymity of submitting confessions made it easier for people to target their peers online.

“I think that if you just listen close enough a lot of people in our school have a lot of awful things to say about other people,” Wu said.

As an account owner, Gardner denied promoting cyberbullying in any way.

“I think some people took advantage of the anonymous confession aspect of it but the majority of what was sent to me was nowhere close to bullying,” Gardner said. “A lot of people didn’t like when people tried to submit confessions that were attacking someone else and would rather my account just be satirical and funny without putting others down.”

I became aware of the cyberbullying world as my account became more popular. People constantly threatened me over negative confessions that were posted when I wouldn’t tell them who sent what in. As the account owner, I faced the short stick; anyone who had something negative to say came to me.

According to Sameer Hinduja of Cyberbullying Research Center, “Confession pages have garnered tremendous popularity in some circles for the same reasons that other novel environments breed cyberbullying.” Confession pages allow for people to share their deepest darkest secrets with people from their schools but negative confessions allow for feelings to be hurt. But nowhere in the report was there any discussion regarding the implications and negativity an account owner could be facing.

“I think the good was probably greater than the mean stuff. Yeah, I just remember being pleasantly surprised that more people were saying nice things,” Smith said. “I think the biggest thing was just focusing on who it was — not really like what was being said.”

Smith said the anonymity of the person behind the account is what made it so popular  — that was the account’s highlight.

“It was almost like a mystery for the school,” Smith said. “It definitely was really fun just to have that mystery, that curiosity going through our minds as it was happening.”

Smith also said that students all talked about who the account owner could be. Was it a friend or an enemy? Was it the quiet kid in the corner or the loud jock everyone knew? The mystery kept the account alive and fresh and it fed on the desire to find out more about the people around them.

“I think it helped the account keep growing because people were trying to figure out who you were so they kept sending stuff in  — I think just to try and figure it out,” Wu said.

After a month of my anonymity, I decided to reveal myself. Some of my followers had made it their mission to figure out who I was, direct messaging every person I followed, so I decided it was time.

My reveal was as dramatic as I could make it — I had a date set and made sure to get everyone excited for big day. I finally outed myself writing paragraph after paragraph like I had gotten canceled — expecting my account to die because of my truth.

“The fact that it was not somebody from our own school and it was just someone who lived a bunch of miles away — that kind of blew people away — that’s why people still continued to send stuff in and why so many people from our school continue to talk to you,” Smith said. “You’re somebody so far away — you’re not going to interfere with our personal lives by knowing this stuff but I think the fact that you did reveal that it was you, it kind of made people feel a lot more comfortable almost because it wasn’t someone who knew them really well or anything.”

However, after my reveal, the account went on its downward spiral towards the end and was never revived. People got bored of it. Even if my account didn’t have a relative impact on the school because it was short-lived, I was able to create my own social network in a place I hadn’t lived in for almost ten years.

However, in other cases, confession accounts have brought a school together. Anonymous confessions can let students know that they are not alone and what they’re feeling does not pertain only to them. In my own case, it’s allowed me to put myself in another student’s shoes and to see what life is like for them. Even if some of the confessions may be considered foolish, they are ultimately a way to find out what another student is struggling with.

I don’t think I realized that until I ran my own account and became aware of how real it was — it wasn’t a game — this was real life. I experienced a rush of emotions while running the account; people became upset, and then the very real heartbreak of realizing how these were people’s lives and I was impacting them to some degree felt very surreal to me — I had made many friends but I had also ruined friendships.