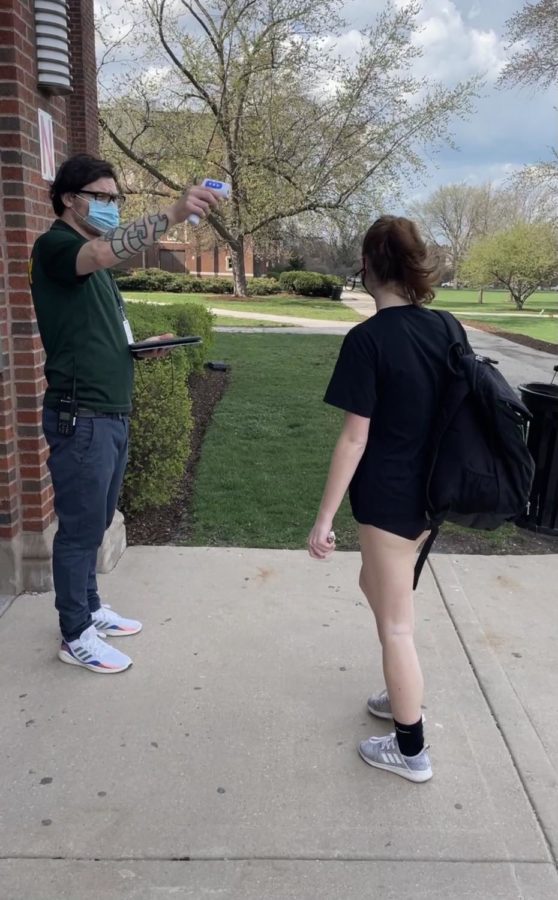 A student passes a temperature check before being allowed in the building for volleyball in April.

For student Giselle Carrion, Div. 364, the return to school has been about the adjustment to the new rules and regulations brought on by the COVID-19 pandemic.

“We’re not allowed to hug or even shake hands. For me, that really sucks because I used to hug and do a special handshake with almost all of my friends. One of my friends hugged their partner in the middle of the hallway and one of the security guards made them wave at each other to show what they should do. I understand why this protocol is enforced but at the same time, can’t we at least touch elbows or something?” Carrion wrote in an email to The Champion.

Lane’s security guards must also comply with the new rules. Unlike students, however, they had to weather the year in the building.

“CPS security was at their schools the whole time. For those who didn’t get an exception,” Mr. Smith, Lane’s Head of security, wrote in an email to The Champion.

Security has adapted to, and now enforces, the CPS COVID policies. For security, these rules are applied no differently than to anyone else.

“Security officers have to be 6ft apart and wear a mask per CPS. For students we have to check them into a database to make sure that they did their health screener and also that their temp has been taken per CPS,” Smith wrote.

Without students the cavernous halls of Lane can be a desolate and lonely place. Now, with the return of students and staff, those halls are a little less lonely, according to Smith.

“LANE TECH WAS A VERY VERY VERY LONELY PLACE WITHOUT STUDENTS AND STAFF. I’m HAPPY TO SEE PEOPLE IN THE BUILDING!!!!!!!!!!!!!,” Smith wrote.

An often overlooked piece of the Lane Tech community are the custodians. They, like security, have had to deal with the changes brought on by the pandemic. Lane’s 21 custodians have had to change their routine little over the pandemic.

“Typical day involves cleaning and with the pandemic, it has just become more regimented with additional high touch surface cleaning included,” wrote Mr. Luis, Building Operations Manager, in an email to The Champion.

According to Luis, CPS contracts its custodians through Sodexo Facilities Management, the “Worldwide leader in food and facilities management.” The minor changes in protocol have seemingly not been very difficult to adapt to.

“It just requires more diligence on their part for cleaning effectively,” Luis wrote.

The difference for students has been seemingly large. Getting into the building, students’ first experience to start the day, is subject to the new regulations.

“It was definitely different between the pandemic times and pre-pandemic times.” Ann Duong, Div. 364, wrote in response to a Champion survey.  “Because there were less people in school, there was less traffic, so the commute to school is much faster. I would leave my house much later than I would usually do before the pandemic due to the faster commute.”

In an email to The Champion, Duong wrote that Lane feels “strange.”

“To me, I think the biggest difference between pre-pandemic and now is the number of students who are in school. There were way fewer students than before. Since I am a student doing hybrid learning, there were about three to eight students whenever I would come into my classes. Some days, I would be the only person in the class, so it felt awkward. But overall, the hallways were not as crowded and it feels strange,” Duong wrote.