Rolling in the Windy City: Finding community in the Chicago skate scene 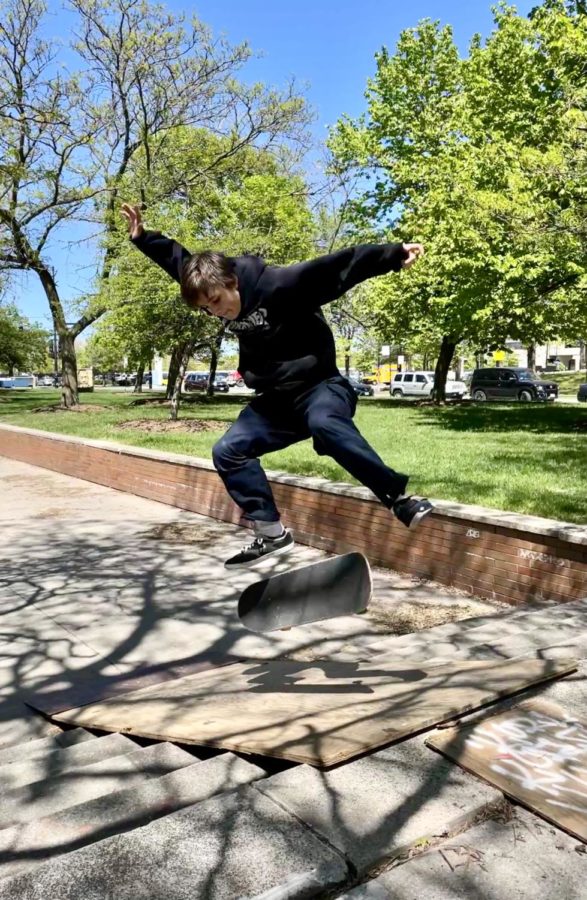 Charlie Hunt pops a textbook kickflip on a ramp made of plywood and other scrap materials brought to Clemente High School.

Charlie Hunt skates a few blocks from his house after logging out of 8th period to go to Clemente High School, but not for anything school related. Behind the building is a courtyard of rails, ramps, ledges, and more skateable obstacles all brought to the school by skateboarders. Only a few blocks from his house, the Clemente D.I.Y. park is one of Charlie’s favorite places to skate in the city because of how welcoming it is.

“I love the community in skateboarding,” said Hunt, Div. 382. “Skateboarding opened so many doors to so many new fun things that you can do, not even just skating.”

After having skated for two years, Hunt says he stuck with skateboarding for the feeling of landing a trick you’ve been trying for so long.

“I used my money from my confirmation into the church to get a board from Uprise,” Hunt said. “I think my parents just thought I’d get it, use it once then never use it again.”

Another Lane student, Amon Ellis, prefers to sharpen his skills downtown. Better known as Exelon Plaza or Chase Tower — the Chase Plaza, as skaters often call it — is one of Chicago’s most notable skate spots.

“The sessions there are pretty much always good,” said Ellis, Div. 153. “A lot of pros and really good skaters come through all the time.”

Ellis says skating is fun almost anywhere there are friends along for the ride.

In 2020, Grand View Research estimated that the skateboard industry was worth $2 billion, and it is expected to keep growing. Various companies have been trying to involve themselves in the skate industry, like IKEA, who released a complete cruiser skateboard in May of 2018.

Dylan Luloff, an employee at Uprise Skateshop, agrees that skateboarding is trickling its way into mainstream culture now.

“It’s totally the cool thing to do right now,” Luloff said. “A lot of people like it on that level, whereas 10-15 years ago you’re still kind of like an outcast.”

He has been working at Uprise for three years, but had been shopping there for years before.

“It’s always been super popular, even from people all over the country. I feel like everybody knows about Uprise.”

Uprise, which has been around since 1997, has had collaborations with notable skateboard brands like Nike SB and Spitfire Wheels. However, Chicago’s skateboarding scene isn’t usually nationally recognized.

“It feels kind of small, or like there should be more to it,” said Luloff. “But it’s just the people who are doing it; it’s all on the underground level — people who aren’t really trying to make it on skating, it’s just dudes who want to do it because they love doing it. Living in the Midwest with harsh winters and all that, you gotta really love it to stick with it through all that kind of stuff.”

But according to Ellis, just because Chicago isn’t always featured in the latest Thrasher Mag doesn’t mean the scene can’t have a heart of its own.

“I think skateboarding is about 40%, or maybe even less, what happens when you’re on the board,” Ellis said, “and a large portion of it is the community, the people you meet through skating.”

Both Ellis and Hunt agree the most important thing to do when you’re skating is to enjoy it.

“It doesn’t matter if you’re good, if you’re bad,” Hunt said. “If you have fun doing it and you like being out on the board, then you shouldn’t be afraid of what other people think.”