‘The Song of Achilles’: A tale of true love and trials and tribulations 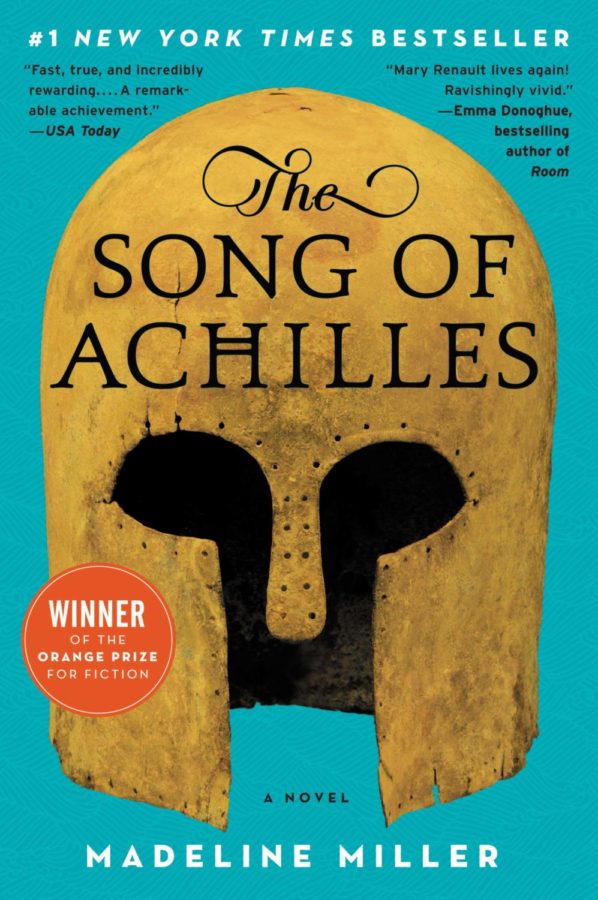 As a dedicated Percy Jackson fanatic, I knew when I stumbled upon “The Song of Achilles” multiple times on my ‘TikTok For You Page,’ that I had to read this book. I have loved Greek mythology since the 4th grade after devouring the two series written by Rick Riordan called “Percy Jackson and the Olympians” and “The Heroes of Olympus” in two weeks, but as the years have passed I’ve slowly ceased to remember all the classic myths I once knew and loved.

I consider myself someone who has read a lot of literature, but I have not been impacted by anything I’ve read recently. It has been a while since I’ve felt confident enough to declare something as my favorite book; a while since I’ve felt the overwhelming feelings of true, utter appreciation for a book. But the moment I finished reading “The Song of Achilles” I knew it would become a favorite due to the contrasting themes of heart-wrenching sadness and the euphoric feeling stemmed from their story.

“The Song of Achilles” (2011) is Madeline Miller’s debut novel that recently started trending on TikTok alongside her second novel “Circe” (2018). “The Song of Achilles” is Miller’s rendering of Homer’s “The Iliad” which is centered around the greek hero Achilles’ downfall due to his wounded pride and inextricable wrath.

Homer’s classic flourishes through its heroic characters and the brutality of the Trojan War but there is a lack of detail surrounding the reason as to why Achilles reacted as violently as he did to certain events and his relationship with his close companion, Patroclus. Miller provides a backstory for this ambiguity while incorporating grandiloquent writing similar to Homer’s, but simple enough for readers to easily understand.

The story begins with Patroclus’s background as a former prince and the only son of King Menotius. His father regards him with disdain due to Patroclus’s lack of talent in princely matters and constantly threatens him to do better in order to keep up appearances. One day when Patroclus is being pressured and cornered by a neighborly prince, due to his lack of mental fortitude, he pushes the boy, who dies from head trauma. Menotius is forced to punish Patroclus and he ultimately chooses to exile him to Phthia, never to see him or return to his kingdom again.

In Phthia, Patroclus resides in King Peleus’s kingdom along with other young boys who Peleus had taken under his care. There Patroclus meets Peleus’s son, Achilles, who is his polar opposite. Achilles is half-human half-god, declared to be the greatest warrior of all time, and is his father’s most prized possession. He has radiant blonde hair and striking, expressive blue eyes in contrast to Patroclus’s raven hair and expressionless, onyx eyes. Patroclus develops a strong hatred towards Achilles due to his inferiority complex but slowly they develop a friendship that blossoms into love as the years pass by.

The story follows their lives as they grow older, discover themselves, and become more infatuated with each other. They face numerous trials and tribulations but the biggest, most insurmountable event is the Trojan War where Achilles is destined to die a savage death and in his undying love, Patroclus follows him into battle.

Miller’s writing is phenomenal in her ability to take a story like “The Iliad” and provide a background story the classic doesn’t while making it completely her own. Her writing style had me entranced; the words were practically pouring off the pages. The story is told from Patroclus’s perspective and I believe this was the driving factor of the story. It takes place over the course of eighteen years and I felt as though I grew with Patroclus through the years. I could feel his frustration and anger, and his patience and love all at the same time.

Although Patroclus and Achilles’ relationship was the book’s main focus, the events that occurred were well endowed with detail. The book constantly transitions from one place to another but Miller is able to create realistic transitions, which not many novels like this are able to do. The shifts felt natural but at the same time there were so many unpredictable twists and turns; readers are not given a single moment to recuperate. These events portrayed the evilness of narcissistic leaders, the selfishness every character possesses, and the dangers of the most toxic trait of them all: pride.

Patroclus does not shy away from describing the utter cruelty of certain events but he constantly tries to see the moral good rather than accepting things for what they truly are. The barbarism of the gods is a common theme as well as how despite their mortality and tendency to fall victim to vulnerability, humans can be equally as cunning. Patroclus is unlike any other character in this story because he is aware of his weaknesses and prides himself on his ability to quietly pursue and love others while not receiving much acknowledgment.

Achilles on the other hand joins the masses in being extremely prideful. As he ages, his arrogance grows. He is well aware that the Greek army needs him to succeed and so when he finds something distasteful, chaos ensues. Patroclus is what grounds him; he is his better half. Achilles barely acknowledges anyone besides him and although he is not as generous with his expressions as Patroclus is, it’s clear that they could not live without the other.

Many people deny the possibility of Patroclus and Achilles being together romantically but “The Song of Achilles” relays the answer that Homer leaves untouched: they couldn’t have been anything but in love due to the utmost dedication and loyalty they had for each other.

The love described in this novel is quiet but passionate which is what made their love even more beautiful. There weren’t many romantic moments per se but the writing captured the abundance of love they had for each other. “He is half of my soul as the poets say. I could recognize him by touch alone, by smell. I would know him blind, by the way his breaths came and his feet struck the earth.” These are a few lines out of many that portray Patroclus’s adoration for Achilles. Achilles shows his love for Patroclus through actions and it may seem at certain points that Achilles had less love for him, but the ending ensured that this was not the case at all. Patroclus’s love was easily reciprocated by Achilles who adored him just as much, if not more.

This book was absolutely flawless from start to finish. I dare say that it is my favorite book and love story. I’ve read my fair share of romance novels and I would deem myself as a romantic, and yet this book completely changed my perspective of love. Miller took the childhood friends to lovers trope and made it incomparable to others. The writing, the development, and the events were crystal clear in my mind’s view. I felt as though I was physically present in the story.

Although an extremely romantic love story it is also a poignant one. There are rarely any moments of upbeatness; it is overall a depressing read. Throughout the novel are trials and tribulations that Patroclus and Achilles are forced to overcome but these events showcased the strength of their relationship. I felt as though Patroclus was chasing the sun at some points due to how untouchable Achilles seemed but Achilles was more like the earth; surrounding him at all times and beneath him all along. They were constantly causing each other distress (more Achilles than Patroclus in all honesty) but not once did they give up on each other; they were relentless in their pursuit for each other.

When I finished this book, I felt as though someone had ripped out my heart and soul and left me to rot in my state of anguish. I felt my ears ringing violently and my tears drenching my cheeks; I could taste the salt on my lips. Their story was extremely tragic and heartbreaking but it taught me the meaning of true love and many life lessons. Not only was their story astonishing but all the characters had an effect on me. But Patroclus easily obtained the crown and became my favorite character in this novel because his bravery and passion was amazing and unwavering.

There were also underlying questions in the book that seemed to be asking: what if they just let each other go? Wouldn’t it be easier to live separate lives? But in my opinion, these questions are surmounted by the fact that Patroclus and Achilles are inseparable and practically soulmates.

“The Song of Achilles” is a read that will leave a mark on you the moment you decide to give it a chance. Some people label it as ‘overhyped’ due to its trendiness but it will not disappoint you. The story is intense and will have you practically ripping out the pages in anticipation of what’s to come next. The emotions and turmoil each character faces is almost palpable and the frustration that stems from it will leave you yearning for more. It’s an addictive ride that is in a league of its own.