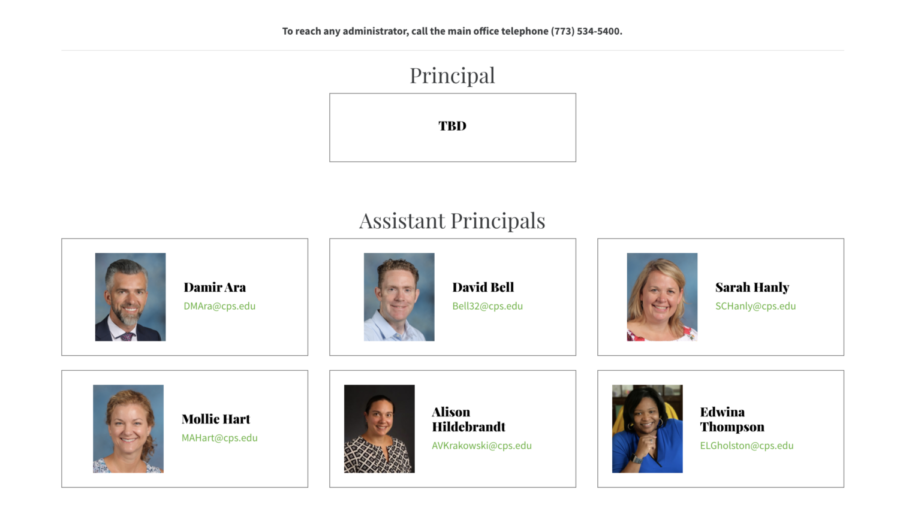 By Mara Mellits and Emily Delgado

During its final monthly regular meeting of the year, on June 3, the LSC announced the final two candidates for the new principal, who Chairperson Emily Haite hopes will be selected by June 15, just in time for the senior graduation on June 17.

The LSC met on June 1 to look over resumes and concluded that two were not eligible for the position, decreasing the number of potential candidates from seven to five. Out of those five, the LSC narrowed it down to two and they will be interviewed on June 8.

Opening the meeting, Courtney Reid, parent of a senior and two sophomores, expressed her gratitude for Principal Brian Tennison and said she hoped the LSC would find someone as sympathetic as him to be Lane’s next principal. She added that she wishes the new principal is as “politically savvy” as Tennison, who she said advocated for the students within CPS.

Haite then responded to emails asking if online LSC meetings were going to continue. She responded that she isn’t sure, but virtual meetings allow for more public participation. Currently, Haite is paying for the extended time of ZOOM and Friends of Lane is marking it as a donation.

As the month of May ended, Tennison announced in an email communication to the Lane community that despite his initial statement indicating that he would remain principal until the end of the school year, he will actually leave on June 1. Haite said that something came up that led him to leave June.

“I know people are hurt that he left. He was hurt that he had to leave too and he couldn’t finish going through graduation. He had to take care of some things and it didn’t work out with CPS for his personal things,” Haite said.

There was no principal report available during the meeting.

Teacher Representative Daniel Law said that the “Grading for Equity” books have been passed out, but the PPLC has not had much time to meet. Haite mentioned that she has been approached by some teachers saying that they do not know what to do with the books or if the books matter now that Tennison is gone. Teacher Representative Katherine Gomez said that they will continue to work with the books despite Tennison leaving.

FOL held the Green and Gold Peloton Raffle and raised a little under $70,000, according to Haite, citing information she received from Nikki Pesch via text.

Kristene Richardson, social media manager for FOL, added that FOL is looking to have end-of-year elections, and the survey went out June 4.

Richardson announced that parents can still pick up auction items on Tuesdays and Fridays at the school store.

FOL is trying to find a date for their end-of-year board meeting as well.

The committee tasked with finding a new symbol for Lane is filled with two LSC members; three students; Alumni Association President Michelle Weiner; Assistant Principal Ms. Edwina Thompson, an alum; and Brian Telles, an English teacher, who is also an alum and a coach. Haite said the LSC had hoped to have a symbol by graduation, but the survey was sent out a week ago and it is open until June 11. She said the new symbol will hopefully be determined by next school year. The next LSC meeting will be spent discussing survey submissions. The LSC will send out another survey to narrow down submissions and then the students will get the final vote. There are currently 277 total submissions and 107 of those are from alumni.

In an abrupt discussion, Haite addressed the conversation she has seen online concerning graduation.

Haite said that she is upset about the hurtful comments saying that the administration does not care about graduation this year. The seniors and everyone had a challenging year, she said, but she has seen assistant principals and other members of the school working hard to make graduation special.

Tennison’s abrupt departure from the school means that he will not be at graduation as he planned to be, Haite said. She also spoke on the frustration coming out because of the specifics of this year’s current graduation and Tennison’s departure. Some parents are angry about the number of tickets (usually there are six but this year students are only offered four).

Haite said she talked to Tennison and he mentioned he is upset that he will not be able to come to graduation.

The LSC agreed that their organizational meeting will be July 14 at 6:30 p.m.

Patricia O’Keefe, parent representative, reported that the survey from April was not statistically valid this month because of low numbers. Only 317 parents responded while past years had more than double that.

A success of the survey was also offering it in Spanish as it allowed more parents to express their opinions, O’Keefe announced.

O’Keefe said that there may need to be some revising on the homework section of the survey and is considering asking questions on equitable grading. She said the survey was good to capture this year because it was so unique, but there was not enough statistical data to represent information.

Haite spoke on the specifics of principal hiring and where the LSC was in the hiring process.

The venue for the interviews on June 8 is yet to be decided. Haite said she would prefer that they be done in person, but she announced that they cannot meet at Lane or in a CPS building.

The candidate forum will be virtual and will take place on June 14. More specific details will be announced later, according to Haite.

Haite brought up some important dates:

After discussing the current updates of the principal hiring process and the announcements, Haite adjourned the meeting for everybody except the members of the LSC as they were going into a closed session to review the closed meeting minutes.