The Lane Tech Champion • May 1, 2021 • https://lanetechchampion.org/11160/opinion/intuitive-eating-and-rejecting-diet-culture-a-new-way-to-approach-life/ 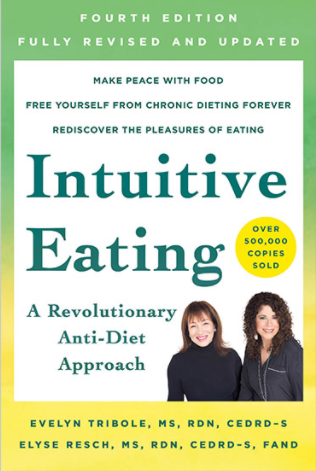 Intuitive eating is a way to shake free the influence of diet culture.

In the book “Intuitive Eating: A revolutionary Anti-Diet Approach,” written by Evelyn Tribole and Elyse Resch in 1995, they aim to educate their readers on intuitive eating through science, client testimonials, as well as an in-depth description of the process and principles.

“Intuitive eating provides a new way of eating that is ultimately struggle-free and healthy for your mind and body,” according to Resch and Tribole.

What is intuitive eating? It is the absence of guilt, rules, and restrictions around food. It is listening to your body and doing what feels right.

However, it is important to note that intuitive eating is a privilege. Many people do not have access to the healthy foods that their body wants or needs, due to living in food deserts or being unable to afford the high prices that are tacked on to nutrient dense foods.

In a survey of 93 Lane students, 53.8% avoid foods high in fat, carbs, or calories, and 67.7% get mad at themselves for eating something unhealthy.

As demonstrated, many teenagers struggle with the weight of diet culture that is shoved down their throats from a young age, from observing parents, watching ads, and consuming media.

These feelings, through no fault of their own, are binding and restricting.

Diet culture is defined by Christy Harrison, a certified intuitive eating counselor and host of the podcast Food Psych, as “a system of beliefs that worships thinness and equates it to health and moral virtue.”

There are ten principles to the process of becoming an intuitive eater according to Resch and Tribole, the first one being rejecting the diet mentality.

This one in particular can be extremely difficult because the world promotes thinness, with diets being the way to achieve this ideal. However the system of diets is designed for failure, diets are unsustainable and put your body into starvation mode, yet people blame themselves when they “fail,” according to Resch and Tribole.

Lane’s “Fit Female” class has a “focus on fitness and healthy lifestyles for females that will encompass all areas of wellness” according to the course catalog. When the teacher, Ms. Davis, was asked what she would say to students who are struggling with diet culture said, “Does the diet work? Of course it does. All fad diets work. But it’s only short-term.”

In the end, continual dieting, using any diet, can become a trap constant stress over food and weight.

James, a former client and interviewee from Resch and Tribole’s intuitive eating book, reportedly watches with a heavy heart as his boss goes through endless circles of dieting not realizing that it is a sure way to ruin your relationship with food.

According to NationalEatingDisorders.org, in a large study of 14-15 year olds, those who dieted moderately were five times more likely to develop an eating disorder and those who restricted heavily were 18 times more likely. Additionally, 62.3% of teenage girls and 28.8% of teenage boys report trying to lose weight.

As a result of the sheer number of teenagers attempting to lose weight, that leaves many of them extremely susceptible to developing an eating disorder

The effect that diet culture has had on teenagers is profound and extremely damaging, as these statistics indicate. But, while the journey to love oneself and reject diet culture in any shape or size is difficult, it is completely possible. One way to challenge the internalized diet mentality is to change the way one approaches eating.

“You just need to be in tune with yourself, eat to heal your body, eat to fuel your body,” Davis said.

The second and third principles of intuitive eating speak to this as they are honoring your hunger and making peace with food. These principles are relatively straightforward, yet equally as ingrained in people’s subconsciousness.

They require aspiring intuitive eaters to eat when hungry without shame — and abandon the internalized food rules and guilt, such as avoiding carbs or desserts.

The fourth principle from “Intuitive Eating” is to challenge the “food police,” that little voice in a person’s head that enforces the food rules.

Fifth, the satisfaction factor. The eating experience does not have to be a burden or chore.

“When you eat what you really want, in an environment that is inviting, the pleasure you derive will be a powerful force in helping you feel satisfied and content,” Resch and Tribole write in their book.

Next, feel your fullness. This means listening closely to your body’s hunger signals, maybe even pausing while eating in order to determine one’s hunger level.

The seventh principle is to cope with your emotions with kindness. For many, food is used to soothe negative emotions, and while that may offer a short term reprieve, it will not resolve the issue in the end.

The survey of Lane students revealed that 63.4% of students eat when they are stressed and 64.5% when they feel emotional, regardless of physical hunger.

While food is delicious and comforting, in the end when people eat when they are not physically hungry, they are further disconnecting themselves from their natural hunger and satiety cues.

Intuitive eating requires “interoceptive awareness,” which is “the ability to perceive physical sensations that arise from within your body,” according to Resch and Tribole. Essentially, eating when you’re hungry, and not eating when you are not hungry.

This can be more difficult than it seems due to people oftentimes not having enough time to stop and have a meal or snack when they want it.

Resch and Tribole’s eighth principle is to respect your body. One of the largest problems people have with this is comparing themselves to others; learning to accept, love and appreciate one’s own body as it is, is essential to overall health and happiness.

The last two principles are movement and honoring your health.

In regards to movement, this does not mean “militant exercise” according to Resch and Tribole. Instead, focus on how your body moves and feels, to aid in interoceptive awareness, as well as to be energized.

Finally, honoring your health means understanding that your body will tell you exactly what it wants. This means communicating that it wants things that are essential nutrients or sometimes nonessential nutrients. Being in tune with your body and satiety cues requires no longer labeling food as good or bad. It is simply food.

The effects of diet culture are very deeply entrenched in people’s psyches, convincing people to turn against their biological hunger cues, teaching them to hate their bodies, and ensuring that no one succeeds in achieving what it deems to be ideal.

But, Resch and Tribole’s10 principles of intuitive eating show a way out; if the option is available, it is a path towards eating and living freely and unabashedly.