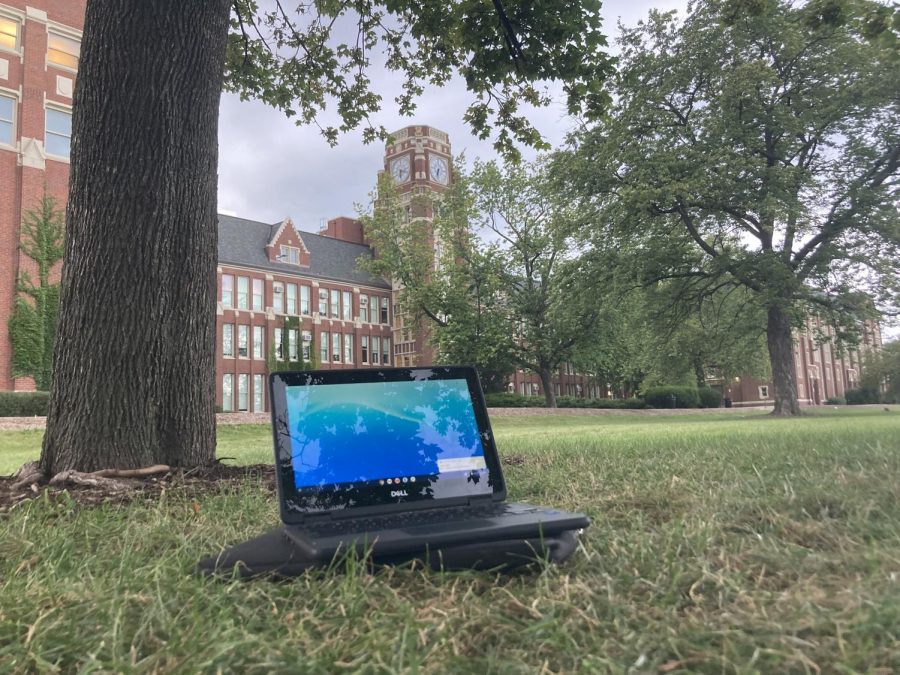 Chromebooks were given to every Lane student. The one-to- one model plan was accelerated due to remote learning needs. (Photo illustration)

There will be differences, however.

A new, as of yet undecided, mascot and school symbol will sometime be in place. Students will be wearing masks and doing their best to stay safe. These are, however, fundamentally cosmetic differences. They only layer over the intractable realities of everyday life. One, much more fundamental change is the fully realized switch to a one-to-one device model, meaning every student will have a Chromebook every day at school.

According to the official website, CPS had endeavored to modernize the technology used in its schools prior to the pandemic. In the fall of 2019, the district distributed devices to the schools that needed them, using the University of Illinois-Chicago hardship index to determine priority. By the spring of 2020 the district had determined that “more than 100,000 devices were needed to support our students in need. Schools distributed their existing stock of devices, and the district filled in the gap with new devices.”

However, many years before the pandemic, Lane sought to integrate technology into its classrooms, with an eye towards a one-to-one model.

“I think about 10 years ago would be probably the first instance of when this tech was getting introduced in the school slowly, with always an idea of, wouldn’t it be nice that if every student could have this experience?” said Damir Ara, assistant principal responsible for the technology office.

“Originally, it was, you know, let’s just save time, turning things in, having to go print it somewhere else, it could be emailed, and you know, just kind of testing the waters about what are the capabilities of this new technology at that time,” Ara said.

The one-to-one ratio seems to have been an achievement for a school of Lane’s size.

“The thought was always how can Lane be a one-to-one school, and the answer was always, wow, that’s going to be really hard, because we have so many students,” Ara said.

The eventual goal was, according to Ara, that every freshman was to get their own device and keep it.

“We actually had a plan going, we’re going to do one class and then another class, and by the time we get to the seniors, we’ll collect enough money to switch them [Chromebooks] every year,” Ara said.

The pandemic, and switch to online learning, expedited the technological master plan.

“It probably would have taken us at least another year or two to get to this point, but with the pandemic and, again, with CPS sending additional Chromebooks that we would have to have bought, just expedited and pushed us into where we want it to be,” Ara said.

Now that Lane has the technology, it will be used in a number of different ways.

“One of the complaints that we get all the time is that the books are really heavy and then kids have to carry a backpack full of really, really heavy books. And my ideal situation is that everyone here is just walking with the pretty thin tablet that they’re taking to their class,” Ara said. “And that is their tool, and they don’t need anything else, because the curriculum, and anything involving instruction or assessment will be already online.”

Seemingly gone are the days of overstuffed backpacks and binders. The age old copy machine frustrations may, too, be a thing of the past.

“There’s absolutely no need for anyone right now to be making thousands of copies and handing them out when you have Google Classroom,” Ara said.

However, the technology’s use is still up to the teacher’s discretion.

“[The] administration may have a desired action with the Chromebooks,” Ara said. “But ultimately, I think it falls on the responsibility of a teacher, and how much teachers utilize that technology in the classroom.”

According to Ara, the change will ultimately be positive.

“So it’s kind of a give and take, but overall if I was to weigh the pros and cons, I feel like, there’s so many more pros than cons that I firmly believe that it’s going to move the building into a positive direction.”