CPS institutes vaccination mandate for all employees by Oct. 15 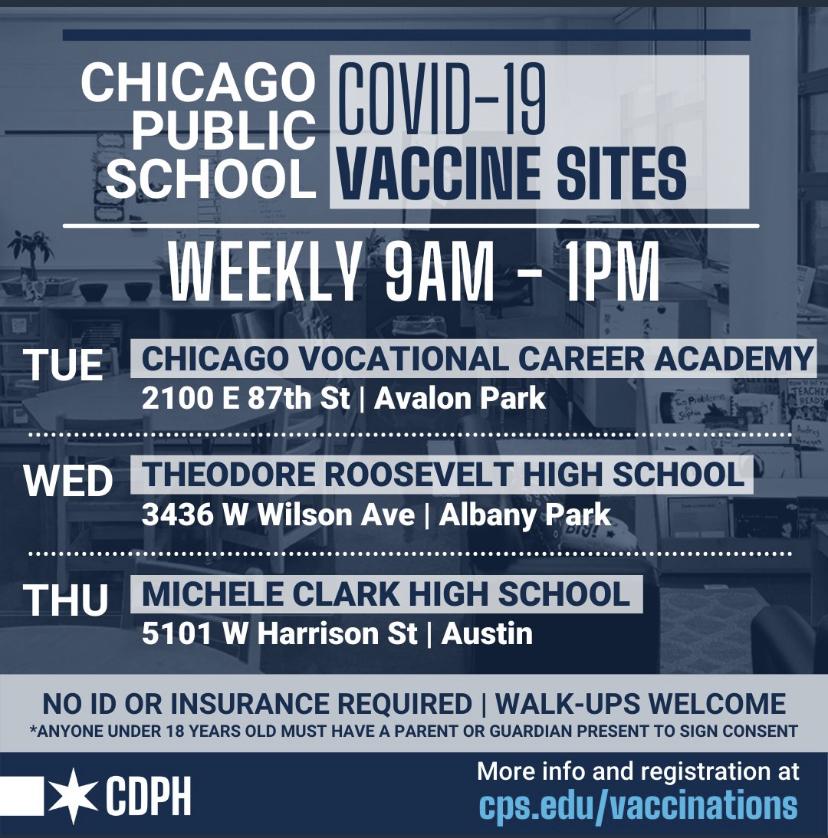 CPS has defined their murky stance on mandatory vaccination, requiring all employees, including teachers and staff, to be vaccinated by Oct. 15.

The mandate, implemented just 17 days before the reopening on Aug. 30, comes about half a year after a hybrid reopening in which CPS stayed silent on whether or not employees would be required to get the vaccine.

But now, as an influx of thousands of Chicago students into many bustling, crowded schools like Lane nears, CPS policy has changed.

Ahead of the hybrid return last year, the district promoted vaccine opportunities for teachers and employees, but did not utilize a forceful approach, instead opting for one that allotted opportunities for its teachers, employees and staff to be inoculated at school-based sites, before opening sites for students 12 and older to be vaccinated this summer.

Staff not vaccinated by the deadline must qualify for a medical or religious exemption by Oct. 15 or risk removal.  Under the normal legal procedures for religious exemptions, employers, such as CPS, do have the right to question whether such a belief is “sincerely held,” and will request proper documentation for a medical exemption. Such exemptions also have to be proven to not do “undue damage” to the employer.

During a March 15 town hall, after the district’s first vaccine push, CPS Project Manager Shruti Saxena confirmed there were employees who immediately signalled they did not want to be vaccinated.

Data gleaned from self-reported surveys and statistics taken from CPS-affiliated vaccination sites shows that 62% of CPS teachers (as of Aug. 13) are currently vaccinated, with another 232 claiming they were awaiting their first dose. For the greater district however, 68%, (or 32,538) of the 47,678 employees are vaccinated.

In regards to students, however, the vaccination outlook is a little grimmer, especially when taking into account the economically and socially stratified nature of America’s third largest city.

According to WBEZ, 45% of teenagers of age to receive a vaccine are vaccinated in Chicago, with most being concentrated in wealthy neighborhoods on the City’s north side.

Lane students come from all over the city, which poses a challenge for the school to make sure enough of the student population is vaccinated to avoid a possible outbreak.

CPS is still steadfast, however, that it will not impose a vaccination mandate for students.

Interim CEO Jose Torres said to WTTW that CPS “wants all children to come,” before adding that testing would be made available to students during the first week of school.

Eight non-COVID vaccines are required for CPS students, including those for Meningitis, Hepatitis B, Polio, and Chicken Pox. Students without such required doses can face exclusion from school, according to CPS’ minimum health requirements.

During the hybrid reopening, Chief Health Officer Kenneth Fox made a point of saying that COVID rapid-testing would never be “mandated or forced,” suggesting there are ways for possibly unhealthy and unvaccinated students to slip through the cracks.

While the Chicago Teachers Union and CPS have been in agreement over the vaccine mandate, they have been at loggerheads over what the CTU claims to be a “rolling back” of health protocols and measures that were utilized during the hybrid return. Social distancing, especially important at larger schools like Lane, is one of the most important.

CTU president Jesse Sharkey has also taken issue with one of the more notable CPS-led COVID programs, saying that the CPS-led vaccination initiative, consisting of vaccination events at schools and other programs, doesn’t do enough to meet the needs of underserved communities, and does not deliver enough vaccines to enough schools-only a handful. “We have been asking for 100 vaccination sites a week to be set up in schools,” he told WTTW.

Employees not fully vaccinated by the Oct. 15 deadline will be required to undergo weekly testing.