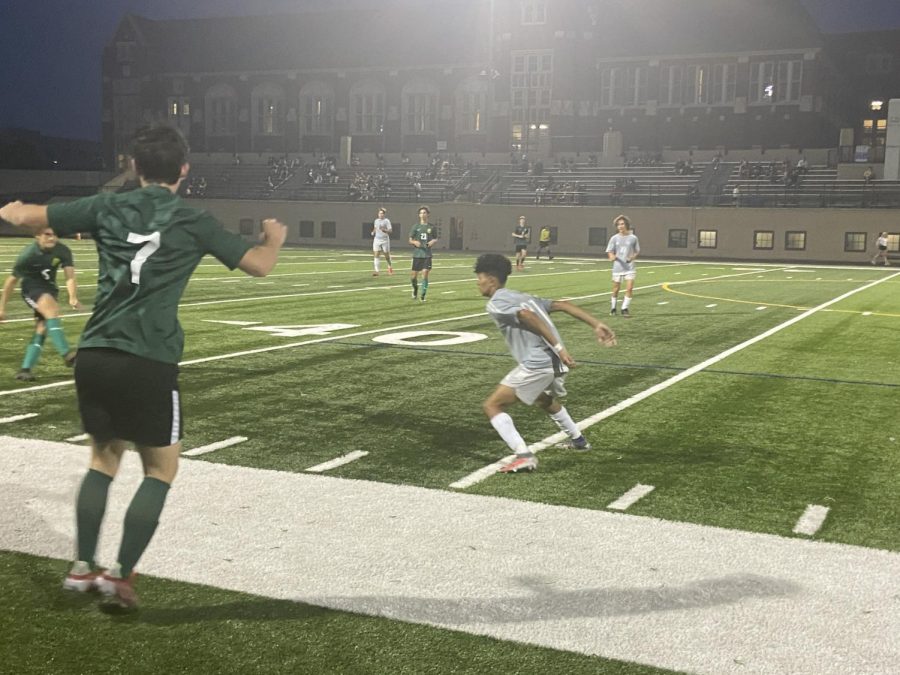 Henry Winston (#6) passing the ball down the field towards (#7) Ryan Hardgrove.

Correction: A previous version of this story stated Wednesday’s kickoff for Lane vs. Whitney starts at 6:00 p.m. The game actually will start at 7:00 p.m.

When Lane and Taft clash on the soccer pitch, more than a win is on the line for the north side rivals. The newest chapter of the storied history between the two squads was written Tuesday night, on a hot and muggy night at Lane Stadium.

An aggressive and very physical game highlighted the story, with coaches from both sides arguing with the ref throughout and fans heckling the opposing team throughout the night.

Players from both sides racked up yellow card after yellow card resulting in many penalty kicks and free kicks, but despite the plethora of opportunities, each team was only able to cross the goal line twice, as the rivals played to a 1-1 draw.

“Taft’s always been hard — it’s always a one-goal game or a tie — it’s rarely more than two goals for either side. We haven’t lost to them in a while but the point is, it’s always tight,” Coach Ricks said postgame.

The game started off strong, with attempts made on goal within the first few minutes of the game starting. However, both teams possessed a strong defense that cleared the ball quickly. The aggression from the players picked up leading to Lane being awarded their first free kick in the first ten minutes.

The two teams challenged each other with the Eagles having quick feet and good communication while Lane boasted better technique and skill. Ricks echoed these contradictions in why the game ended in a tie.

“We have players that have skill, but we aren’t getting the ball,” Ricks. “We’re having to break down lots of numbers; we’re not getting counterattacks with these wide-open spaces and so when that space is a lot tighter, it’s harder to score so we’re not scoring as much.”

Lane played the majority of the first half on the attack, capitalizing on Taft’s mistakes and making a couple of shots on goal. When Lane did let the ball run past them to the back, the defense was quick to sweep it out of there.

“We played well at the back for the first time in a while — we connected the ball nicely,” senior Ridley Shumaker said postgame.

Those connections referenced by Shumaker sprung the ball into action and into the midfield. This allowed Lane to open up some holes and take a few shots on goal. Despite this, Lane nor the Eagles scored with both of them heading into the second half with a goalless tie.

Lane came out for the second half motivated, with a near misses on goal that excited the fans but it ultimately didn’t lead to anything.

Senior goalkeeper Efraim Stewert made a few good saves for Lane when the defense’s miscommunication allowed for the Eagles to make their way through, but that didn’t stop problems arising.

“It could’ve been stronger in the back — going in hard in tackles,” Shumaker said. “There’s sometimes where we’ll play out the back very nicely and build up the field but then there’s other times when we lose our composure and then we boot the ball up the field.”

Lane lost their composure which ended up costing them the game’s first goal. Nine minutes into the second half, the Eagles scored their first goal, erupting chants from the visiting fans.

Lane quickly changed its formation, adding an extra defender and doing everything to protect the net. Little by little, Lane applied the pressure, slowly moving the ball up. Fifteen minutes after Taft’s goal, they moved one of their defenders up with their eyes set on revenge.

Lane wouldn’t score until there were twelve minutes left in the game. A yellow card for the Eagles resulted in a penalty kick that senior Nico Wagner easily hit the back of the net to tie up the game.

“[Taft] didn’t have a great offense and then we gave them a goal that was kind of weaker but we fought back to show character and tie the game,” Ricks said. “After we scored the tie, we were the aggressor to try and win the game so I was proud of that and the character of the team to come back.”

There were no more goals after Wagner’s equalizer, as the teams left the pitch with a draw.

Lane continues conference play against Whitney Young at home on Wednesday, Sept. 15 at 7:00 p.m. They quickly return to action against Morton High School on Thursday, Sept. 16 at 6:30 p.m.

“It’ll be a great challenge for us [against Morton], it’s going to be tough. So that Thursday game is going to be really special even though we’re the heavy underdog,” Ricks said.

Then, Lane looks to make it into the playoffs and go further than that.

“We have a tough couple of games coming up [including] against Morton High — that’s going to be a tough one but other than that, I think we can win the city championship, hopefully,” Shumaker said.