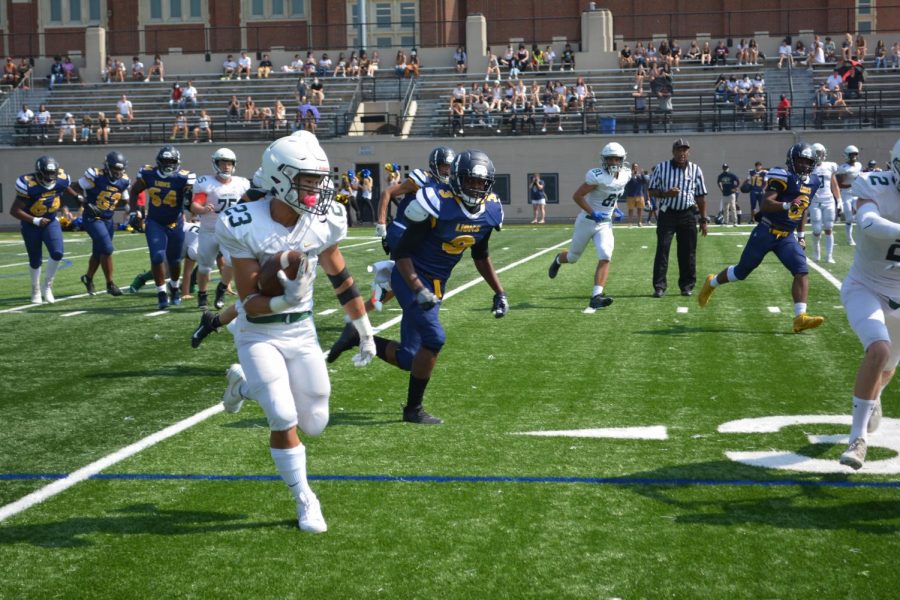 When lightning forced Lane off the field on Friday, the football team took the electricity and ran with it.

After a postponement of Friday night’s game against Lincoln Park due to rain and lightning, the teams returned to Lane Stadium Sunday afternoon to play as both schools looked for their first win of the season.

And for the first time this season, Lane’s offense saw sparks, putting 29 points on the scoreboard as Lane won their first game of the season 29-6 over the Lincoln Park Lions.

One key to success? Solid quarterback play from Mark Seward.

After switching between Seward and Donnell Adams throughout the game last week against Whitney, Seward got the ball for the first three quarters and part of the fourth Sunday.

While his opening drive resulted in a three and out, by the second time he trotted onto the field, a new quarterback seemed to have arrived.

“The consistency of the command of the huddle, that’s something that he [Seward] gives us,” Coach Dewalt said postgame.

Six straight rushes, including three first-down rushes, by running back Daeyhun Kim followed by a 46-yard pass to wide receiver Noah Verbrick set Lane up with first and goal from the ten. A 10-yard reception by wide receiver Benji Agunloye gave Lane their first points of the day. The extra point attempt by Simon Olson put Lane up 7-0 with 3:30 to go in the first quarter.

“A quick start is something that we haven’t had in a while,” Verbrick said postgame. “Getting that first touchdown to Benji, that definitely set the momentum for the whole game and then we came out in the second half and played the best football we’ve played.”

Before Lane could get to their second half success, the team looked similar to their first three games of the season with multiple penalties across the first two quarters and two interceptions in the first half by Lincoln Park’s Anius Finch, including one in the end zone to keep Lane from putting more points the scoreboard.

Despite no more first half points from the offense, the defense earned two points with a safety by Sebestain Cordero with three minutes left in the first quarter, just thirty seconds after their first touchdown.

As the second half kicked off, it looked like Lincoln Park might keep the game close, after it only took two plays for the Lions to get on the scoreboard off of a 57-yard touchdown reception by Cameron Toussaint. Their two-point attempt was stopped.

But for every step Lincoln Park took, it seemed Lane took two, as Lane would put another touchdown on the board with 2:10 to go in the third off of a 17-yard touchdown reception by Noah Verbrick, in his first game back after suffering a concussion and missing weeks two and three.

“It felt great,” Verbrick said. “A concussion is nothing to play with and it’s not my first one so I had to take it easy. It’s a game that I didn’t think I would miss, but, you know, getting out there, getting a touchdown and getting a win is the most important thing so I felt great.”

“I mean we started off pretty rough, including me,” Agunloye said postgame. “I didn’t play that good in the first half but our coach, he gave us a talk, at halftime, in the locker room. We came back with a different energy and we were able to make a couple plays.”

Seward and Adams both finished the afternoon with two passing touchdowns. A decision on a starter for next week’s game has not been made yet, but the team will definitely continue to roll with a rotating quarterback strategy, according to Dewalt.

As the team sorts through their quarterback strategy, they may have pieced together an offensive strategy for the rest of the year — an early run game before transitioning to the air.

“In football, I really believe that you have to establish the run,” Dewalt said. “And I think what we haven’t done the first three weeks is really get our running game going. As [today] we were able to get our running game going and open up the pass, because when you get four, five, six yards a carry out [of] the run, that, as you saw, sucked in the defense [so] that we were able to throw the ball behind them.”

Because of the game being pushed back, Lane will have a short week of rest before their homecoming game against Curie.

“We can’t practice them tomorrow because I have to let their bodies recuperate. So tomorrow we just lift weights and have a walk-through, then we work Tuesday and Wednesday, walk through on Thursday and, play on Friday,” Dewalt said. “We’re at the point of the season right now where the kids kind of know what’s expected, their bodies are really acclimated to being hit and hit and things like that so right now is a good thing as well because we have some guys that are hurt and need to heal up a little bit.”

The key to establishing a new winning streak is consistency and that will be put to the test at their next game, according to Agunloye.

“We just have to continue with this momentum that we got, we can’t start off slow in the first half, like we always have this season — we just got to start fast — overall,” Agunloye said.

And for Kim, he thinks one win has the power to carry the team forward.

“I think we’re already locked in,” Kim said postgame. “I think our momentum is going to carry us over.”

Lane’s homecoming tilt with Curie will kick off at 7:15 p.m. Friday, Sept. 19. Lincoln Park will continue their search for their first win as they host Hubbard next Saturday at 1 p.m.