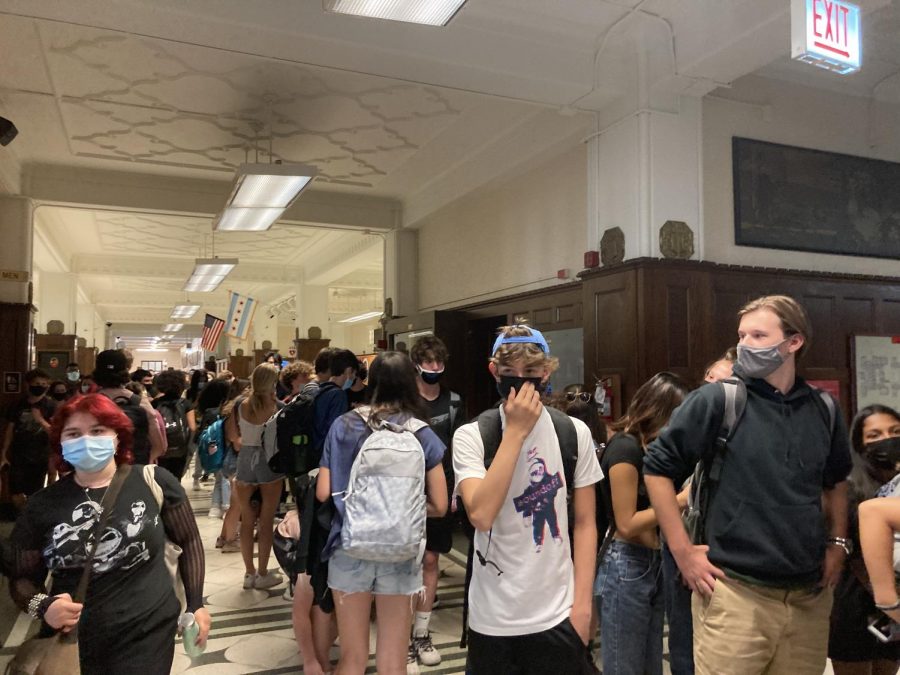 Students wait in the halls of Lane to pick up football tickets after school on Sept. 17.

Have you seen them around? I certainly have: those students, those people. Just, like, walking around. What’s up with that? Why are they here? There are so many, it’s kinda overwhelming. It’s almost as if your brain can’t comprehend just how many people there are. If all that’s real is what you see, then your class is everyone in the universe. But then, sometimes, you move class, and that’s everyone in the universe again. Were all these people created just for you? Clearly, you’re special. Well, maybe you’re special.

Unbelievable, right. It was when I first got here. How could so many people coexist in one spot at one time. I’ve lived in Chicago my whole life, I’m a city kid; I know what it’s like, yet, nothing prepared me for those hallways. We’ve all seen the pictures, the students packed like sardines within the bustling thoroughfares. Those pictures, mostly fabrications taken during fire drills or assemblies, however, tell a true story about our school’s size.

How do you stand out amidst the bustle? That seems to be the maxim of city life and that of Lane life. It animates so many facets of the school. The flamboyant dress, the fiery ideas, the intense, subconscious, competition: all driven by that insatiable need to stand out. In a place like Lane it’s almost entirely impossible. Some get their moment in the sun: the sports players, the I-Days captains, the valedictorians. But, for the vast majority, it’s a daily struggle to stand out amidst the straining mass.

How many names can you match to a face? I challenge you, right now, to do it. How many could you recall? 10? 20? 50? I don’t believe I could go any higher than that. To know that many people is simply a skill I was born without, however, it is one I envy.

To carry out more than eight close relationships is something that, for me, is totally impossible. For whatever reason, whenever I go over that eight somebody vanishes. It’s like playing Jenga with too few blocks: add or remove one and the structure falls. What was I to do when confronted with all those people? Try to be friends with everyone, of course.

That experiment failed harshly and quickly. The first several months was a contest of how many names I could learn and then immediately forget. I would meet people, befriend them, and disappear: having involved myself with some other people. Eventually, it occurred to me that by attempting to know everyone, I knew no one. I realized only then that what I needed was an anchor, someone or something to affix me to a spot within the school.

I’ll be honest, I’m here, in print, for the community. I enjoy writing, and I enjoy other people’s writing. It’s that simple. It keeps me tethered to the building and the people within it. When I go home I can never say it was like I was never here.

These clubs, these sports, these anchors allow you to cultivate relationships unlike any normal class. The people you meet and the friends you make will be astronomically easier to take with you outside the halls. Fundamentally, club members associate by choice not by chance.

This school’s size means becoming lost in a shuffle is an inevitability, something not to be avoided but embraced. Your friend eating lunch with somebody else: go read in the library (it sometimes runs out of space). Your crush rejected you: cry in the fourth floor bathroom (I promise no one goes in there). What I wish I had understood as a youthful freshman is that it’s OK if not everyone likes you, and it’s also OK to hang out alone sometimes.

At Lane, it’s inevitable these things will happen. The size guarantees you will run into bad people, but it also guarantees you will run into good people. There are so many people, somebody will like you and somebody will say yes, eventually. There are, like, also at least 30 people with whatever strange niche interest you have, so go find them. There will always be someone to talk to, someone to commiserate with. There will always be someone who loves and hates you. It’s just the way it is.

What does a school supply if not a pre-packaged community. A place where we communally learn and digest the world. A place not quite for adults but not quite for children. Lane is a city, and why do so many flock to cities? For community and for opportunity. Lane supplies and delivers both, with stunning efficiency and finesse. The opportunity to have your words published on the printed page. The opportunity to meet people from every type of place.  Its size is its virtue and its undoing. No kind of person, bad or good, is unrepresented here. This place contains everyone, meaning you’re never lost and you’re never quite found.