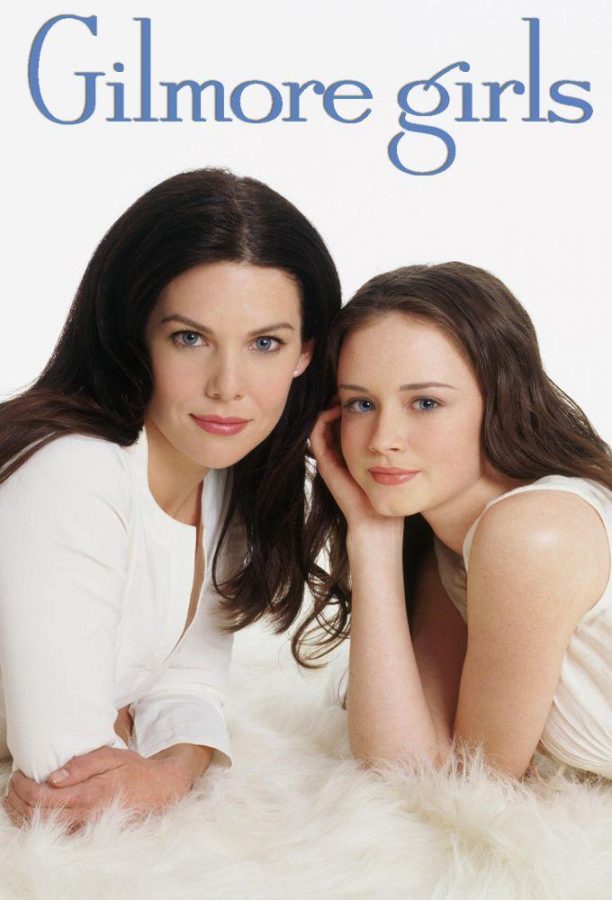 Maybe you’ve heard this line before. Or maybe this one.

The point is the popular early 2000’s show “Gilmore Girls” (2000-07) is still as popular as ever — especially during fall — the season perfect for binge-watching.

Rory Gilmore (Alexis Bledel) is the perfect teenage daughter: straight A’s, an adorable smile and has just been accepted into the prestigious private school Chilton. Her young mom, Lorelai Gilmore (Lauren Graham) is elated when she finds out. Yet, there is one drawback: Lorelai can’t pay for Rory’s new school.

She goes to the only people who can help her — Richard (Richard Herman) and Emily Gilmore (Kelly Bishop) — Lorelai’s estranged parents. They agree to help Lorelai by paying the tuition but there’s one caveat — Lorelai and Rory must eat dinner with Richard and Emily every Friday. Richard and Emily feel that they don’t know their granddaughter because Lorelai has been hiding her from them.

When Lorelai was sixteen, she became pregnant with Rory, causing a rift between Lorelai and her parents which in turn led to her running away from her wealthy life in Hartford off to the small town of Stars Hollow.

She was taken in by an Inn owner who also gave her a job and a place to stay. Lorelai and Rory then met the quirky cook Sookie (Melissa McCarthy), the grumpy diner owner Luke (Scott Patterson), the sultry dance teacher Miss Patti (Liz Torres) and the quirky yet the most important townsperson, Kirk (Sean Gunn).

Kirk is one of the best side characters on the show and shines through because of great writing. He aggressively competes against the Gilmore girls in a 24-hour dance-off, surviving the entire night; is selected to be a lead in an elementary school play despite being in his twenties; copies Luke by making his own diner and taking away Luke’s customers but only for one day because it would be too much work to continue.

But what I really love about “Gilmore Girls” is how it continually highlights the mother-daughter bond through different relationships. Rory and Lorelai are best friends and tell each other everything, spotlighting a close relationship. Rory’s best friend Lane (Keiko Agena) and her strict mom (Emily Kuroda) contrast the Gilmore girls through an orthodox adherence to religion and bad communication. The writers also feature that struggling mother-daughter bond within the relationship between Lorelai and Emily, who constantly fight because of their differing approaches to life.

The writers do this all for the duration of the series — underscoring different mother-daughter pairs — contrasting Rory’s and Lorelai’s relationships. By doing this, the viewers see the many sides of motherhood and daughterhood. It makes for great drama but also for development amidst the characters.

That allots for one of the best parts of the series — the love shared between Rory and Lorelai. No matter what happens to them, they will always be best friends. There are several points where the show highlights the strong mother-daughter bond showing that the bond between a mother and a child is truly unbreakable.

The writers also contrast social class and lifestyle among the Gilmores. Richard and Emily have fun by going to debutante balls, DAR (Daughters of the American Revolution) meetings, and lavish cocktail parties. Rory and Lorelai have fun by rewatching “Casa Blanca,” eating rotten Chinese food, and throwing deviled eggs at the town bad boy’s car.

When Rory goes to Chilton she experiences this same type of class divide between her classmates and herself. This is further drawn out when she attends a prestigious ivy league school later in life.

Although she grew up differently from her classmates, Rory wrestles with her privilege her entire life in a way different from everyone else because of her upbringing. She grew up with a single mom who didn’t have the support of her family, yet her tuition for high school and college was paid for, no questions asked.

The complexities within the characters themselves are what make the show so entertaining. These are everyday people going through everyday experiences. There isn’t an underlying seriousness to the series, but that’s why it’s so great. “Gilmore Girls” has a great set of actors that make the characters real and stand out with comedy underlined. It’s where A-list actor Melissa McCarthy got her start and opened the doors for many others. There’s a running joke among fans that every mainstream actor got their start on “Gilmore Girls” because of the multitude of guest stars.

The humor is what makes the show come alive and it’s the reason why it’s one of my favorite series that I always go back to. Even though I first binged the show when I was in sixth grade, I’ve gradually made my way back to season one episode one every fall — it’s a tradition at this point.

Other than the great writing and characters, the beautiful New England scenery of colored leaves falling down and autumn jackets that are just enough for the warm breeze but cannot sustain the snow keep drawing me back. Every time I put on the show I’m pulled into a warm hug with a scent of baked cinnamon apple lingering in the background. Just the nostalgia of it alone is enough to remind me of days when I’d run out of the yellow school bus and jump straight into the pile of red, yellow and orange leaves.

So put on your favorite pair of pajamas, grab a hot cup of coffee, (or hot chocolate if you’re like me) and try an episode of “Gilmore Girls” — it’s my favorite fall activity and I’m sure it’ll be yours too.