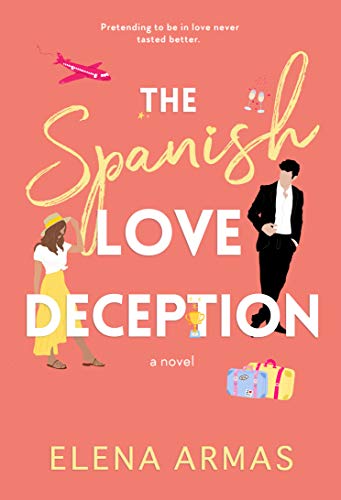 It was past midnight — a week before school started and I was itching to read a new book, specifically a romance contemporary. As I was scrolling through Goodreads, I came across “The Spanish Love Deception” and immediately pulled my covers over my head and threw myself into finishing it as soon as possible. I was intrigued by the cliche but lovable enemies-to-lovers trope and the representation for women in STEM  — I knew I was bound to love it.

Elena Armas’s debut novel, “The Spanish Love Deception” (2021) follows Catalina Martin, who fled Spain to live in Brooklyn, New York, to pursue a career at an engineering firm. Although her primary purpose in coming to America is to live out her dreams, it is also a means of escape. She desperately wants to evade the suffocating atmosphere surrounding her difficult breakup and the pressure her family has put on her to indulge in a new relationship. Catalina manages to stay on a peaceful trajectory until she’s suddenly knocked off course — her sister is getting married back home in Spain and Catalina desperately needs to bring along a date to the wedding.

She doesn’t want to seem pathetic in front of her family by showing up alone and so she does what she believes is best. She carries out an elaborate lie that she has a boyfriend, she’s madly in love, and he will be attending the wedding with her.

Catalina defines herself as a successful, hard-working woman but her efforts seem futile in the realm of romance. Being in a leadership position at an engineering firm has granted her little to no time for romance and if anything, her romantic endeavors seem to lead to trouble.

Her main source of trouble comes in the form of one man, Aaron Blackford. Aaron Blackford is Catalina’s work arch-nemesis, the bane of her existence, she would say. When Aaron is first hired to the firm, he ignores her efforts to befriend him, and from there they form a seemingly hateful relationship.

Aaron happens to find out that she’s in need, and much to her surprise, he offers to be her date for the wedding in exchange for her to be his date for an event as well. She refuses until her desperation overpowers her pride and she finally accepts his proposition, finding herself having to pretend to be in love with someone she despises.

Arriving in Spain leads to chaotic family gatherings, awkward meetings with a newly engaged ex, and hate turning into a strange mix of fondness and frustration. Catalina finds herself drawn to Aaron and is bewildered by his change in behavior. Their fake romantic relationship begins to feel possibly real and the question between them lingers: are we still faking it or will this deception turn into something more?

When I first decided to read “The Spanish Love Deception,” I was just looking forward to something cute that would put me in a good mood. My expectations weren’t low but they weren’t particularly high as I had just discovered it and its use of a typical enemies-to-lovers trope. However, I was pleasantly surprised when Armas exceeded my expectations with this lovable, fun, romantic debut novel.

The progression of Catalina and Aaron’s relationship is slow but not to the point that it annoyed me. Aaron is very obviously into Catalina but she’s reluctant to accept his feelings because she feels like she’s being led on.

Catalina is not very trusting and cares too much about what others think, but these traits are the result of people, mainly men, undermining her skills. In turn, she began to doubt her integrity as well and so she continually tries to prove herself as worthy.

I loved the whole narrative of her being a woman in STEM and how contrary to others’ beliefs, she achieved everything through her hard work. Her character made me feel empowered because when people doubted her, she proved their accusations meritless. Catalina’s character developed throughout the story and by the end, she became more tenacious than ever.

Aaron, on the other hand, is her polar opposite. He keeps to himself, which causes him to appear arrogant and closed off. He always seems fraught with tension yet so uninterested in others’ presence, especially Catalina’s.

But this portrayal couldn’t be further from the truth — he’s much more considerate and kind than he exudes. He judges Catalina at first, but it’s clear that he regrets his actions — which he proves during the trip to Spain where he takes his chance to fall into her good graces. There are so many subtle things he does for Catalina that make it undeniable that he’s enamored by her. Catalina and her family constantly swoon over him, and I can’t deny as a reader, I was definitely swooning as well.

Reading Catalina and Aaron’s dialogue is incredibly entertaining and will cause readers’ feelings to fluctuate like a plane in turbulence. I can’t even count the number of times I squealed in excitement and then groaned in frustration. There are also insertions of Spanish dialogue which made the authenticity stand out, although I was frustrated because my Google translations were not all that great.

This book is genuinely funny, witty, and romantic but it doesn’t shy away from pressing on more daunting topics: outer appearances, sexism, conforming to the expectations of others, and the difficulties of overcoming traumatic experiences.

If you’re looking for a feel-good book that will have you letting out boisterous laughter, look no further than “The Spanish Love Deception.” I could not put this book down for a minute; I stayed up all night continuously scrolling as if my fingers had a mind of their own. There are definitely unrealistic aspects of the story, but I don’t think this made the story lacking whatsoever — it’s called fiction for a reason. It’s predictable at times but it will leave a lasting impression, especially if you’re a hopeless romantic like myself. After reading this lovable story, I’m definitely anticipating more wonderful novels from Elena Armas.