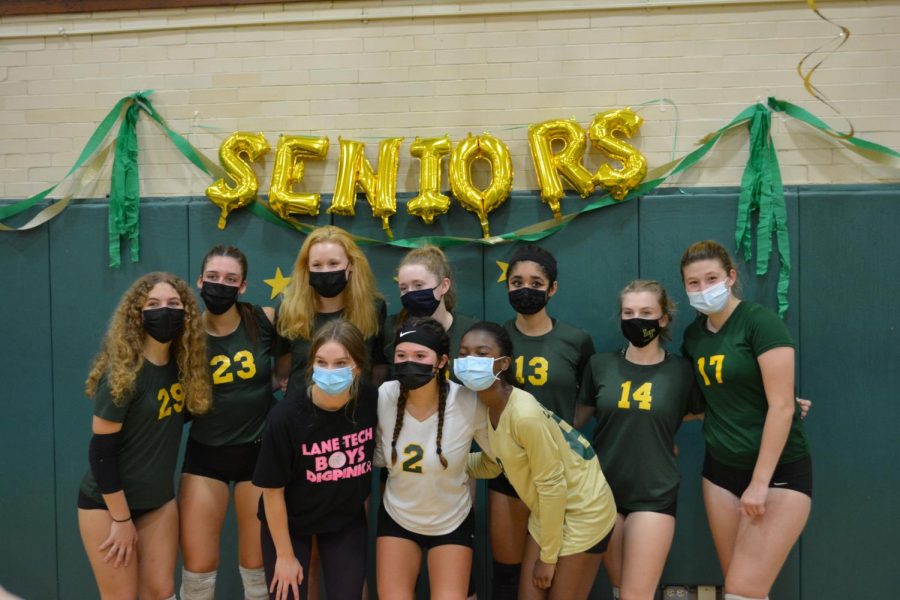 Lane faced off against George Washington High School in an intense match of girls’ volleyball and seized victory in two sets on Sept. 28. What made Tuesday night special, however, was Senior Night, celebrating the leaders and backbone of Lane’s varsity team.

The Washington Patriots, 4th in the Chicago Public Super Conference, saw a formidable opponent in Lane, who are 2nd in conference. Lane was confident coming into the game, emboldened by emotions running high in the gymnasium.

The confidence shined throughout the game, with Lane sweeping the match, winning in straight sets 25-11, 25-20.

“Everyone felt really hyped, you know,” said senior setter Alexx Torres, Div. 261. “I think that we kind of missed this tradition last year with the season because we didn’t have a formal season. And it’s just cool to kind of have the sight of celebration.”

The seniors were welcomed onto the court by the junior varsity team, who gathered into formation with colorful pool noodles. Cheers erupted from team managers, coaches, families and the student section as the senior players — as well as senior manager Maya Matusaitis — emerged from the formation and took photos with their parents. Coach Brian Telles followed with a speech commemorating the seniors.

Telles, formerly head coach of varsity, is now head coach of junior varsity. His connection with the varsity team still runs strong, and he has watched firsthand how the seniors demonstrate leadership on and off the court.

“They run the team, they run the offense,” he said postgame. “It’s a great group of seniors, they’re awesome. I mean, I had them last year. They’re just a wonderful group of kids.”

High spirits from both the crowd and team bench extended to the court as Lane took command of the first set, which saw exciting rallies prolonged by defensive blocks and powerful spikes from both sides.

Washington, despite being at a slight size disadvantage, were able to rack up points. But Lane’s attack triumphed with outside hitter Stella Smiejek and right side hitter Aminah Ahmad hitting bombs that gave Lane a solid lead over Washington. Torres, the team’s starting server, also went on an eight point serving run with multiple aces.

Whether it was a missed Patriot dig on a serve-receive or the ball flying out of bounds, the gymnasium roared with each new point, further energizing the team and its senior players. Lane would go on to win the first set 25-11.

“I think our confidence and our energy carried the team offensively,” said senior libero Simone McKenzie, Div. 271. “When we play down, we don’t do our best. We played with a lot of energy today and you can see that in the first match.”

Lane lost a bit of rhythm at the start of the second set, being riddled with some miscalculations in the back and middle row that gave Washington an early lead. Washington’s JV cheered the varsity team on as their defense remained resilient despite a taller Lane front row at the net.

Lane re-established its cadence halfway through the set. The score eventually balanced out to 13-13 with fumbles from Washington and another powerful serve from Torres that pierced cleanly through Washington’s back row. McKenzie kept Lane’s back row together with some solid digs, and hitters were able to find rhythm with setters. Washington then began to crumble as the scales tipped, Lane inching closer and closer to 25 points.

Washington continued to fight on in the latter half of the second set, chasing Lane in the race to 25. However, with Lane’s dynamic solidified, Lane would go on to win the second set 25-20 and secure victory.

Since the beginning of the season in August, the team has seen vast improvement that can be attributed to building the team’s relationship with one another, according to Smiejek. With this game in particular, the team was able to focus on what they have been struggling with in practice: “Serving, passing off to the serve and hitting in like the right spots and actually paying more attention,” Smiejek said.

But above all, the seniors and the energy they brought to the rest of the team shined on the court.

“We’re really excited to try to fill these shoes [as upperclassmen] and I think that the seniors this year are just really positive,” Torres said, “and I think that’s really gonna take us to the [city] championship.”

A possible precursor to what could be an intense city championship match, the Lane-Washington game provided much needed momentum for Lane for the rest of the season. The team is expecting a busy several weeks ahead of them as the city championship approaches.

“Washington came out to play,” Telles said. “They got a taste of what it’s going to feel like in the playoffs. It’s so close now, it’s a week away.”

Varsity went on to face Fenwick and Westinghouse following the Washington win. They added a loss and win to their record, scoring 0-2 and 2-0 respectively. Lane will be on the road against Resurrection on Oct. 4 and Payton on Oct. 5. With big games up ahead, Lane hopes to hold on to their energy and momentum that can carry them to success in the city championship.

“Our coach tells us that these [games] are just practices for the tournament and all the way up to the city championships,” McKenzie said. “We take a lot of these games seriously and we really want to win.”