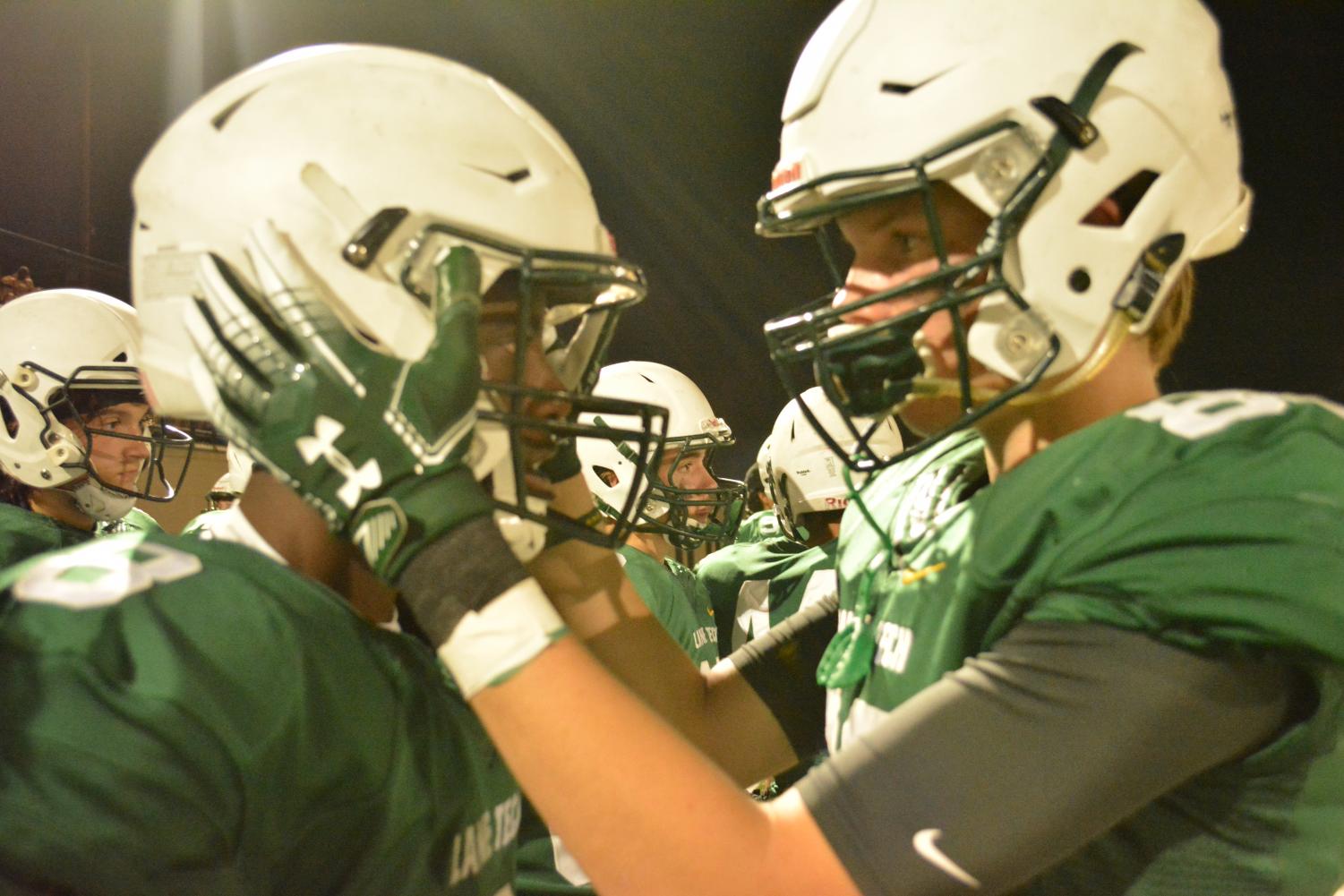 Charlie Duncan (#80) motivates Donnell Adams (#8) before he goes on the field. (Mara Mellits)

Charlie Duncan (#80) motivates Donnell Adams (#8) before he goes on the field.

After an overtime loss to rival Taft last year, Lane football was ready to shake off that two-point, 36-34 loss.

The Eagles had other plans.

Fans packed into Lane Stadium to watch one of the biggest CPS rivalries of the year, as Taft extended their victory margin from last year by a point. Taft (4-2, 3-1 Chicago Public Illini – Land of Lincoln Conference) defeated Lane (2-4, 2-2) 15-12 in a low-scoring battle on Lane’s breast cancer awareness and teacher appreciation nights.

“I think regardless of who’s the better team, these games always are tight because there’s a lot of emotions on both teams — brings out the best, brings out the worst,” Taft’s Head Coach Zach Elder said postgame. “You gotta be smart, you got to play fair and play to the whistle. The fans start yelling on both sides, and then everybody gets more ramped up so it’s just trying to keep the focus on the field and on the game, and not on all the other stuff going on.”

The high emotions from both sides were on clear display throughout the game.

There was a scuffle between the teams near the end of the third quarter leading to two ejections from both teams. Players were visibly angry at each other, as multiple penalties were dished out by the refs.

Lane players reported being stomped on during the fight and players on both sides were injured throughout the game, most notably an injury to Lane Quarterback Mark Seward. Seward exited the game after his injury in the third. He completed 7 of 16 passes for 103 yards, with one interception during his playing time.

“This rivalry meant a lot to the team because we’ve lost in the previous two years and a lot of people call it a rival school,” Lane wide receiver Casey Joyce said postgame. “It’s a really tough loss because there’s a lot of chitchat going around, there’s a lot of banter going back and forth but at the same time, we played a great football game so that’s all you can ask for.”

After a late third quarter touchdown gave Lane the lead, the injury to Seward started momentum for the Eagles, which led to a late score by Taft to clinch the victory. 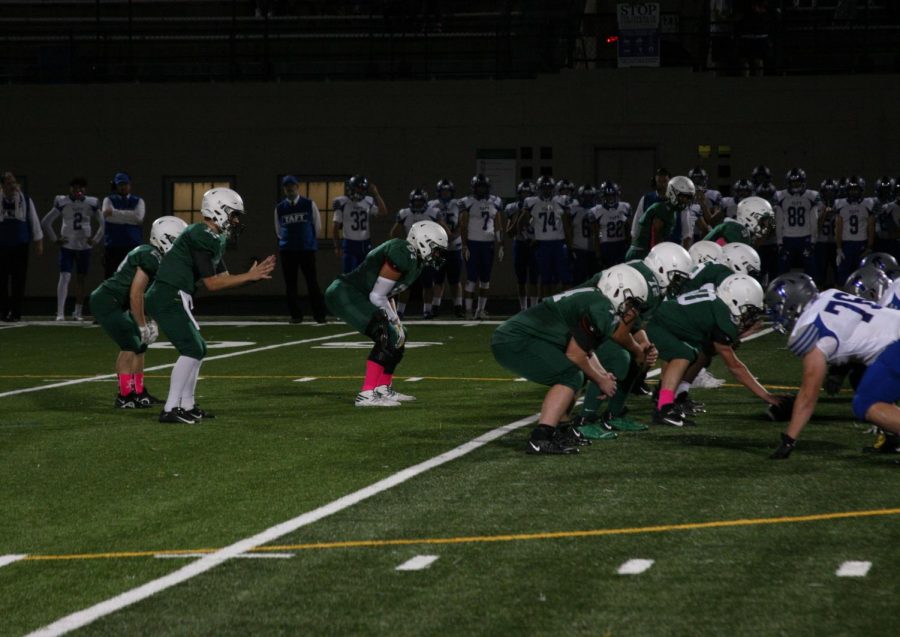 Quarterback Donnell Adams would come in to finish the game for Lane after playing the second quarter, but had trouble advancing the ball. He’d finish the game with just 15 passing yards and four incompletions, three of which came on Lane’s final drive.

“We just have to finish these games — but we’re getting there, we have to learn how to win,” Lane’s Head Coach Dedrick Dewalt said postgame.  “Right now, we haven’t quite learned how to win.”

While Taft’s offense also had its fair share of errors throughout the game, a consistent rushing attack from Isaiah Cruz and Ryan Porebski fueled the Eagle’s offense. Cruz finished the game with 100 all-purpose yards while Porebski went for 47 on the ground.

“Rushing has been our bread and butter all year,” Elder said. “Ryan was forced into running back actually week one. I think he delivered with like 80 yards and a couple touchdowns. He’s been an animal all year. And then you know Cruz is Cruz. He’s been that dude since his freshman year.”

Despite the strong rushing game, it was a 15-yard touchdown reception by Taft’s Steven Tantchev from Quarterback Barah Abad and a successful two-point conversion that gave the Eagles the 15-12 lead with just 2:21 left in the game. The lead would stick.

The big news for Lane coming into the game was the loss of kicker and soccer player Simon Olson, who due to CPS COVID guidelines cannot play in more than one sport this fall. His absence was felt in some key moments, with Lane not attempting any field goals or extra points.

James Connolly stepped up for the kicking role but there were few opportunities to test out his skills. Lane attempted two-point conversions after both of their touchdowns, and missed both times.

“We’re pretty good special teams-wise so I don’t think that his [Olson’s] loss really affected us that much,” Dewalt said.

It wasn’t all disappointment for Lane throughout the game, with the defense showing more aggression than usual out of the gate.

Their defense continued to have good moments throughout the game, holding Taft’s offense to two touchdowns, but those two scores were all the Eagles needed.

In addition to Tantchev’s receiving touchdown, Abad showed off his run game with a 15-yard rushing touchdown to put the Eagles up 7-0 with 8:55 to go in the second quarter.

However, Lane’s two missed two-point conversions kept four points off the scoreboard that would have been crucial in such a close game. Even though they came alive in the second half, scoring all of their points, their offensive problems persisted. It was Lane’s third time this season scoring under 15 points.

“We are a second-quarter type of team on offense right now. I feel like if we come out stronger first quarter and dominate full game, we have a better chance of winning,” Joyce said.

Gavaldon led Lane in receiving yards, while Finn Merril led the rushing attack for Lane with 20 rushing yards. Lane only put up 144 yards of total offense as a team, with a strong defensive effort from Taft.

“You know our defense was flying around, I felt our D-line specifically was great,” Elder said.

The Eagles take on Westinghouse on the road at 1 p.m. on Sat., Oct. 9. Lane will also take the field Saturday, taking on conference leader Phillips on the road at Gately Stadium at 6:30 p.m.

“It’s going to be tough to pick them up. The road only gets tougher from here,” Dewalt said. “We’ll have them come back Monday, motivate them and get them ready to play but that shouldn’t be an issue — we got a great group of kids, so we should be OK.”

Donate to The Lane Tech Champion

Your donation will support the student journalists of Lane Tech College Prep. Your contribution will allow us to cover our annual website hosting costs.

Thank you for your donation!