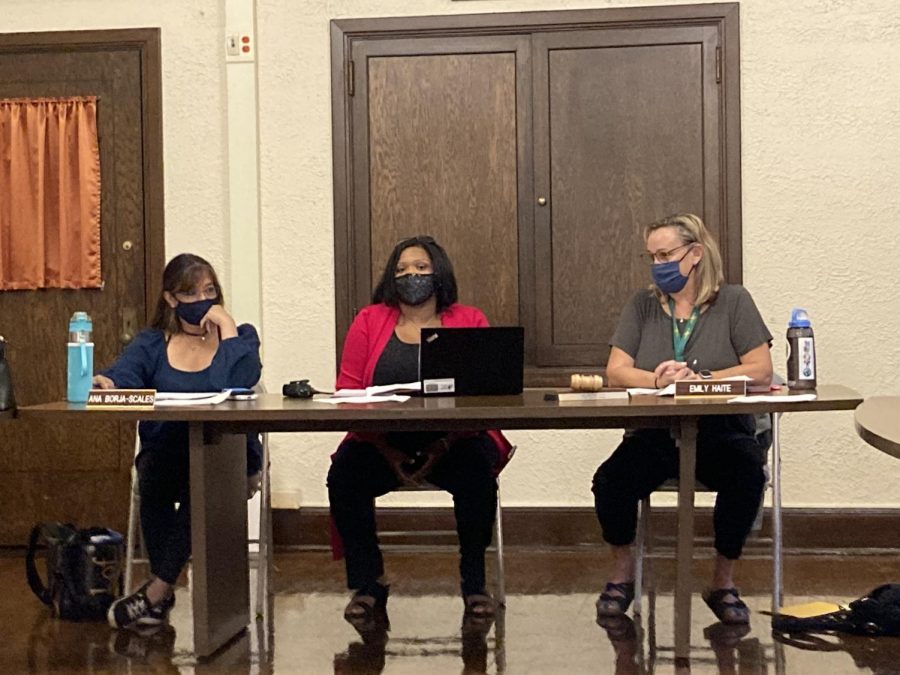 By Aidan Sadovi and Alex Burstein

The days of computer cameras and muted microphones at Lane Local School Council (LSC) meetings are gone — but will be back in less than a month.

The LSC met in Room 113 on Sept. 23 for their September meeting, their first meeting in the school building since the world shut down for the COVID-19 pandemic.

Despite the fully in-person meeting, a solid part of the meeting was spent discussing whether it should stay that way. The verdict ended up being no, with a Google Meet option for streaming to be offered in upcoming meetings.

In addition to the meeting format, COVID-19 protocols, a new school symbol and more were discussed.

Public Participation
One participant praised the in-person meeting format and thanked the LSC for their speediness in appointing new principal Edwina Thompson.

A student asked for the use of a microwave for students during lunch.

Another participant asked the LSC to continue to ask parents for ideas regarding COVID-19. She also sent in an email asking about indoor eating accommodations and how college representative visits are planned.

Haite read an alumni email asking for meetings to have a virtual participation option. According to the writer, who said they had diabetes, the in-person meetings were not feasible for them due to their high risk for COVID-19, and as such, made a request invoking the Americans with Disabilities Act for future meetings to be online.

Since it is currently the last year in the two-year cycle of the CIWP process, Thompson pointed to the system that has focused on staff development, college and career planning, diversity and student voice, and family engagement. In regard to these “competencies” as they’re called, she spoke of SEL (Social Emotional Learning) workshops recently held with teachers, recent changes to grading and resubmission policies, distribution of Chromebooks and newly purchased projectors, college meetings held in conjunction with the College and Career Center, and more.

Principal Thompson spoke, saying there’s no new PPLC until elections. The PPLC will continue to discuss Social-Emotional Learning and grading.

FOL did not have a representative at the meeting, but President Nikki Pesch sent Chairperson Emily Haite notes to read. FOL donated $10,000 to Lane’s homecoming, and they are kicking off their annual appeal.

Additionally, Oct. 6 and 7, Roscoe Village is hosting a shop for schools. Twenty percent of all sales at participating locations for shopping and dining will be donated to Lane if you mention you’re there for Lane.

FOL’s next meeting will be on Oct. 7.

The Alumni Association did not have a representative at the meeting. However, Thompson briefly talked about the 50th anniversary of women at Lane dedication ceremony that was held earlier in the month.

Thompson said there will be a bigger event later in the year that the Alumni Association is hoping to be able to hold at Lane.

Currently, the LSC has no teacher representation, after Daniel Law and Katharine Gomez stepped down as teacher reps this summer.

An application to join the Lane LSC as a teacher representative was opened when teachers returned to school, but there were no responses. Thompson said one teacher said they’ll do it if there’s no one.

Haite hopes to find people by October, and wrote a letter that the LSC voted to send to teachers asking for applications.

The LSC heard from multiple people asking for a virtual option.

A motion unanimously passed will allow for people to stream meetings. No virtual participation will be allowed, but questions and comments can be submitted until 3 p.m. the day of, to be read at the meetings.

An in-person quorum of LSC members will be preferred; however, members can join and participate virtually to avoid the possibility of the LSC not having a quorum.

Thompson said that she is proud of students for wearing masks. She went on to say she could not say how many students and teachers are vaccinated, but a majority of students have a vaccine card submitted.

Thompson also said Lane is looking at more places for people to eat inside this winter. However, Thompson said students continue to go outside.

According to Thompson, students with vaccine cards on file will only have to be quarantined if they test positive or if they show symptoms, not if they are a close contact.

A new symbol selection committee will be needed for this process, according to Haite. She said it’s been a much longer process than expected, and students, a teacher and Principal Thompson all had to step down from their roles on the committee for a variety of reasons.

The process for determining a new symbol will end with a student-only survey with three options.

Haite and Community Representative Maureen George will continue to serve on the new committee, along with Student Representative Dayana Bautista. Ideally the new symbol will be determined this semester, according to Haite.

Announcements
Haite reminded everyone the upcoming meetings will be on the third Thursday of the month and will be hybrid. This month’s meeting was moved back a week due to Yom Kippur.

She also mentioned how much she loves spirit day in the run-up to the next day’s pep rally and homecoming day. Haite said in her ninth year as a Lane parent she still gets goosebumps from the Lane spirit during homecoming week.