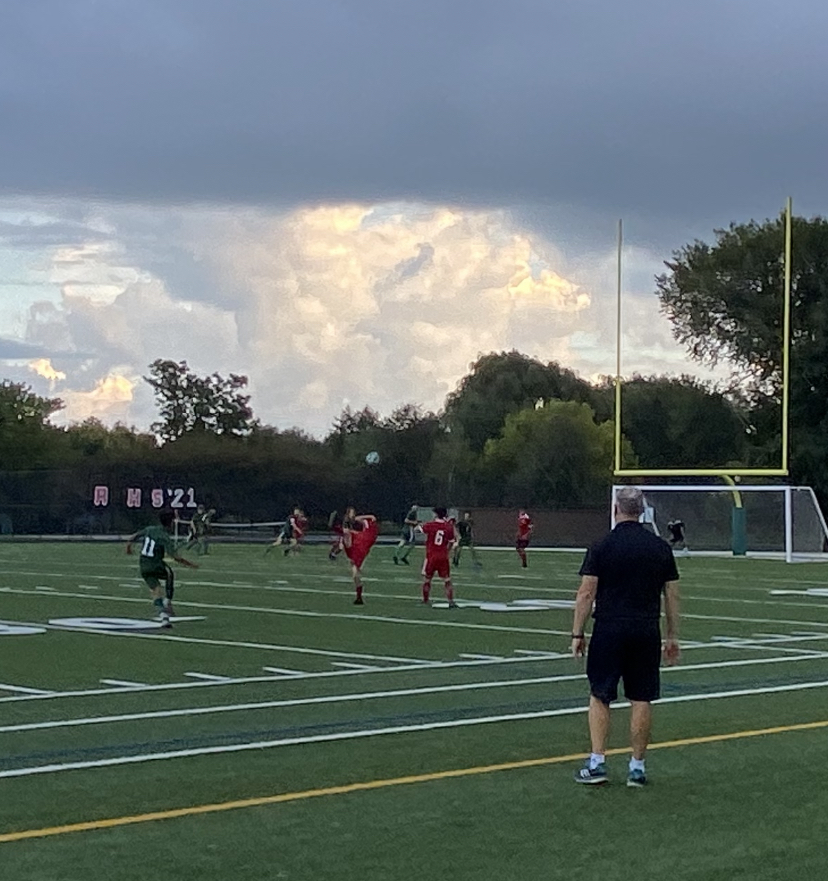 Thursday morning’s thunderous deluge may have put Lane and Lake View’s 4:30 kickoff in doubt, but the victor always seemed a certainty after the first half hour of the game.

An energetic Lane ran riot over Lake View, resulting in a decisive 6-0 win, helped by multiple goals from senior Ryan Hardgrove, along with others from fellow seniors Maciej Flasza and Nico Wagner. Sophomore Ben Dopp and junior Kamil Pluta also chipped in with strikes.

The first time Lane played Lake View this year, according to senior Nico Wagner, Lane only won 2-1 in a much closer game — a marked difference from the trouncing on Thursday.

Head Coach Andrew Ricks and his players stuck to their regular formula of cultured possession and playing out from defense, but they passed with much greater verticality and zip than usual. Whereas Lane would often take longer to play out from the back in some other games, patiently waiting for a killer pass or run, Lane center-backs found midfielders like junior Josue Ramirez very shortly after receiving the ball.

Lane’s first goal came not from passing, but from pressure. Lake View defenders’ attempt to pass out of the back was nullified by the work of junior Allan Ramirez, who threw himself in front of a high pass. The ricochet fell to Ryan Hardgrove, who had the relatively simple job of finding the net from close range after a short run.

“You don’t win in the first three minutes,” a cautious Lane team member from the bench was overheard saying, as it was 1-0 only shortly after the game started.

Around the eleventh minute, another goal came from a deflection, this time when Hardgrove’s cross was blocked by a Lake View center-back, falling to sophomore Ben Dopp. This shot, too, was blocked, but fell back to Dopp, a chance he dispatched easily.

Lake View persisted, even after getting put against the wall by a losing scoreline.

When Lake View got closer to Lane’s box, they were dangerous, with many of their players utilizing some quick dribbling and powerful long shots to at least keep the leaders on their toes.

Goals came later in the first half for Lane from Hardgrove, Wagner and Flasza, from tap-ins, volleys and well-worked crosses.

At halftime, Ricks was not entirely content with their performance, hammering in the importance of “intensity” into his team despite (or maybe because of) the lopsided score.

Ricks reiterated the focus on intensity after the game also, even after giving them an earful on the subject.

This win, he said, was never guaranteed — at least not before the end of the first half.

“We had to get a tie or a win to advance [in the City tournament], so it was not a tune-up. But once it became 5-0 at halftime, then it was a tune-up,” Ricks said.

As the second half commenced, a dejected but still determined Lake View found attempts to stifle the confidence of Lane ultimately futile. They found much of their possession on the counterattack, and many of their shots were hopeful ones from outside the box.

The only goal scored during the second half came from Lane junior Kamil Pluta, who scored Lane’s sixth goal of the game by heading in a cross to the back post at point-blank range.

Unbeknownst to the sideline and other onlookers, that would be the last goal of the game — but     not because of the mercy rule.

Around the 60th minute, the sky began to darken, and eventually downpour. Thunder struck, and the game was officially called off.

Speaking in the locker room in the bowels of Amundsen’s Winnemac Stadium, Ricks said Lane had hit a rhythm, but has not started playing solid, “mistake free” soccer yet.