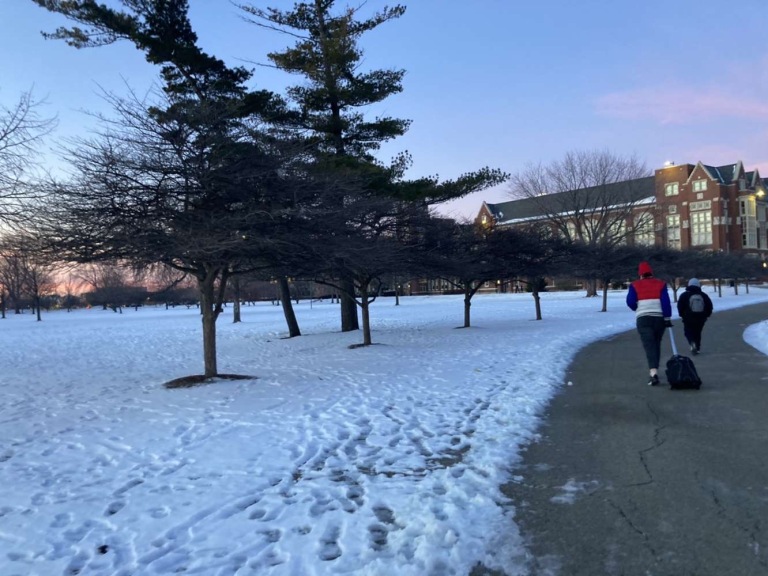 Lane Tech on the morning of Jan. 4, 2022. Classes were canceled across CPS for the next day after a district-wide teacher vote came out in favor of remote work action.

The first week back from winter break has been unusually uncertain for CPS students.

Students entered only their fifth month back in their respective school buildings after an entire school year spent largely in front of a computer, but rising cases and panic around the Omicron variant of COVID-19 have caused the Chicago Teachers Union to vote for a return to virtual learning.

Tuesday evening 73% of teachers voted for a remote work action starting on Wed., Jan. 5, the CTU announced on Twitter. CPS responded earlier today, stating before the vote that if teachers choose to work remotely, classes will be cancelled for students on Wednesday.

“The action will end when one of the following conditions is met: The current surge in cases substantially subsides, or the mayor’s team at CPS signs an agreement establishing conditions for return that are voted on and approved by the CTU House of Delegates,” the CTU tweeted Tuesday night.

This is the third time in recent history that the CTU has threatened action, either for work-stoppage or a switch to remote. In 2019, a CTU-CPS conflict resulted in a two-week strike. 2021 culminated in “Teach-Out” protests, which eventually came to a resolution prolonging an already long-awaited brick and mortar return.

This school year’s spat seems to be heading towards a much less amicable, and much more confusing, resolution. While school will be out of session tomorrow, the fate for students and teachers for the rest of the week remains to be seen — if teaching will go on or if CPS will keep classes stopped has yet to be announced.

Spates of at-home COVID tests for CPS were rendered “invalid” after foot-high pileups in drop boxes around the city, emblematic of a greater CPS testing infrastructure that critics have decried as slow and disorganized, according to WBEZ.

A week of voting and polling

Tonight’s vote followed a House of Delegates vote earlier in the evening, where 88% of voters said all CTU members should vote on the matter.

A survey of 136 Lane CTU members earlier in the week agreed more narrowly, with 60% voting for a remote return, 30% against and 10% undecided, as confirmed to the Champion by several sources.

In response to CTU complaints she previously characterized as “saber-rattling,” Mayor Lightfoot recently said that there was “no evidence to suggest there is currently a crisis.” A Union representative and CPS high school teacher who asked not to be named disagreed.

“I want to know what the Mayor considers a crisis. … The Mayor didn’t think there was a crisis when CPS schools were understaffed and dirty, either, but that led to the deaths of staff members,” the teacher said.

“Our test positivity rate,” they continued in an email interview, “is the highest it’s been since covid began, and we have a new variant that is more transmissible than previous variants. “

“What I want to know is at what point the Mayor thinks COVID is a crisis, and why she wants to wait until the ship is sinking before attempting to avoid the fatal sinking,” they said.

Teacher and student absences have also risen, though a Lane Teacher who has declined to be named has found that in their experience many are due to exposure to those who have tested positive rather than positive cases.

“Compared to the sizes with which my classes usually are, I definitely have noticed about 25% of the students absent,” Lane senior Aline Villanueva said.

CPS has rolled out a “metric proposal” which aims to ameliorate the need to return to online learning, but the Union Representative and associate voting delegate is less than satisfied.

“Recently introduced metrics? As in, the proposal that CPS shared to CTU this morning, ran a press conference about noon, but hasn’t actually been sent to schools or staff? What I know,” they continued, “of that proposal is that CPS thinks that 40-50% test positivity in students, and 30-40% positivity in staff is acceptable. I see that they think it’s all right for schools to have 20%+ of staff out, even though the district doesn’t have enough subs to cover even non-covid staff absences.”

To the other unnamed teacher, one of the most unsafe scenarios would be an understaffed school, as they say, that without supervision, a school is not safe.

According to proposed CPS guidelines, in order for a school like Lane to shut down due to COVID, around 40%, or 80 members of its roughly 200 teachers, would have to test positive for the virus.

Many South Side schools have gotten the closest to shutting down, with one school having 68% of its students and staff in quarantine in mid-December, according to Fox 32 Chicago.

“I am not per se worried about going back online…COVID cases are rising and I would rather be remote and safe than be in person with a risk of getting COVID.” Villanueva said. They continued to say they feel unsafe at Lane, “especially during passing periods.”

The CTU Representative and delegate is not worried about possible learning loss, which the mayor has pointed to as a reason for the district’s resistance.

“No, I don’t think that a 1 day lockout (or even a 10 day lockout) will negatively impact students,” they said.

“Any definition of learning that says students are negatively impacted by a loss of classroom time is too narrow a definition of education for me to take seriously,” the CTU representative and associate voting delegate said.