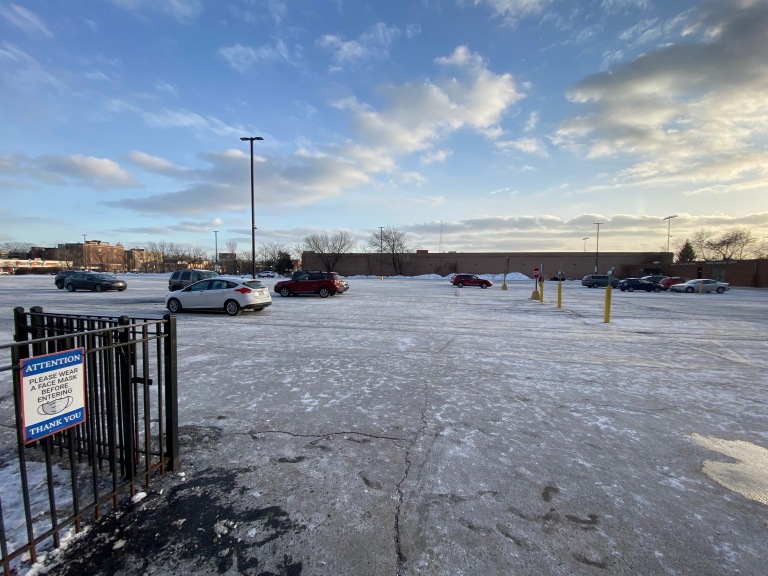 Lane’s parking lot sits empty on Thursday afternoon. While usually full on weekdays, with most teachers participating in CTU’s remote work action and students not in attendance, the lot sits mostly empty this week.

Some students set to return to Lane — but not for learning

Chicago Public Schools (CPS) students will be without learning for the third straight day tomorrow, but some Lane students will have the chance to enter the building for the first time since Tuesday.

This morning, Lane sent out an email and Google form asking for students to respond if they “are interested in potentially coming into the building tomorrow for a short time for an activity.”

Now, Lane is expecting up to hundreds of students to come to the building tomorrow, according to Lane Principal Edwina Thompson in an email to The Champion.

While Lane plans for the return of some students tomorrow, the Chicago Teachers Union (CTU) and CPS remain deadlocked in an agreement for remote or in-person learning. While students will be in the building, no teacher-to-student learning will occur.

CPS announced the cancellation of school earlier tonight, but left the door open for schools to open on a case-by-case basis of available staff.

Jones will have a similar open space for students, while some other selective enrollment schools like Whitney Young and Northside will not have in-person activities (Northside is having the option to pick-up materials tomorrow).

Lane students will have four options tomorrow — open gym for basketball in Gym I and II, schoolwork in the library, college admissions work or school work in the CCC and board games in the student lunchroom. The form sent to Lane students also asked if students would be interested in peer tutoring or being peer tutored.

These locations, however, seem to be fluid, as board games will also be offered in Room 113, according to a confirmation email obtained by The Champion.

There are two windows for students to participate in activities at the school: 9 to 11 a.m. and 1 to 3 p.m., though specific entrance times and doors were emailed to students who were confirmed to attend tomorrow.

Students will have to bring their own board games, but Thompson told The Champion the school has sports equipment they will offer.

In the same email to The Champion, Principal Thompson also said that Lane would be receiving shipments of KN95 masks. The district has been criticized for not offering the medical-grade masks, but less effective cloth ones, in the past.

“We have received a few masks so far and are awaiting our shipment from the district,” Thompson said. “We are not sure how many masks we will receive, but we will distribute them accordingly.”

Alderpeople across the city have been given KN95 masks from the Chicago Department of Public Health (CDPH) to distribute, per Heather Cherone of WTTW.

The CDC says that KN95 masks filter out 95% of air particles, as compared to less effective cloth masks, which CPS schools offer.

Thompson told The Champion that all students who filled out the form will be able to come in tomorrow, but those who didn’t are not allowed to. The form was open from 10:57 a.m. to 2 p.m. today.

“We had to plan in advance for the allotted spaces,” Thompson said. “However, if our current situation and guidance remains the same, we will send out a new survey for each day that we are able to safely monitor activities that align with district guidance. We will not be offering instruction as certified teachers are needed for instructional purposes.”

Despite no official learning, CPS said this evening that sports will be allowed to return at the high school level on Friday if a team has enough coaches and personnel who are returning to work to run the team.

“All practices and competitions can resume starting Friday if the host school(s) can support the events with the appropriate coaches and supervisory personnel at the school level. Schools may travel to contests that are out of their buildings either for CPS or suburban games,” a CPS letter stated.

Thompson told The Champion she does not know at this time what, if any, sports will start tomorrow at Lane.

While teachers are still amidst their remote work action, some staff and teachers have been coming into the building, allowing for Lane to have activities in the building.

While concrete data on how many teachers came into Lane today is not available, the parking lot on Thursday afternoon was uncharacteristically desolate.

Col. Tom Cogdall, who teaches Lane’s JROTC (Junior Reserve Officers’ Training Corps)  program, told The Champion of his indifference to what other teachers may think of him going into school and how he wanted to adhere to his contract.

“I don’t think it’s a matter of what they think, it’s what I have to do. I have to follow my contract,” he said. “So there’s no question about following guidance and rules.”